While declaring a war on terrorism, Al-Sisi’s regime has, in parallel, made Egypt’s economy a priority of its governmental policies. In 2016, Egypt sought a loan from the International Monetary Fund (IMF) to help boost its economy.

Stressing the need for reform, the government embarked in November 2016 on an IMF-supported programme, allowing its currency to float freely, and launched a wave of subsidy cuts on energy, with the aim of reducing government expenditures, and to reduce budget deficits.

Two years after, progress has been made on a macro-economic level, obtaining the IMF’s approval that Egypt was on the right track, as the GDP growth rate increased to 5.3%, up from a 4.2% rate, at the beginning of the programme.

Also, for the first time in over a decade, the government managed to achieve an initial surplus, estimated at EGP 2bn for the current fiscal year, according to Finance Minister Mohamed Moeit, as reported by state-media on Monday.

Unemployment and inflation rates have been decreasing throughout the year, but still remain high, as Egypt is aiming for single digits next year.

According to an ambitious sustainable development strategy known as ‘Egypt Vision 2030’, the economy should enable the country to become an active global player, generating decent and productive jobs, as well as a real the GDP per capita, reaching the high-middle income countries’ level.

Accordingly, the new strategy focuses on balancing population growth and the available natural resources, meeting the aspirations of the public for a better life, providing the public with equal access to basic services, and attaining higher levels of human development. Egypt also aims to reduce poverty by half by 2020, and eliminate it by 2030, as 27.8% of the population was estimated to be below the poverty line in 2015.

Egypt’s population, growing at an annual rate of 3.5%, mostly lives along the Nile river, poses a significant challenge to such strategic goals, and threatens the beneficial impact of economic development.

In September 2017, Egypt’s population was estimated to be 94.8 million, with another 9.4 million abroad, according to Abu Bakr Al-Gendy, the former head of the CAPMAS, the country’s official census institution.

The internal population is reaching 98 million this week, Hanan Girgis, vice executive president of the Egyptian Centre for Public Opinion Research (Baseera), declared during a Wednesday conference hosted by Cairo University, discussing the socio-cultural context with the aim of finding new strategic vision. 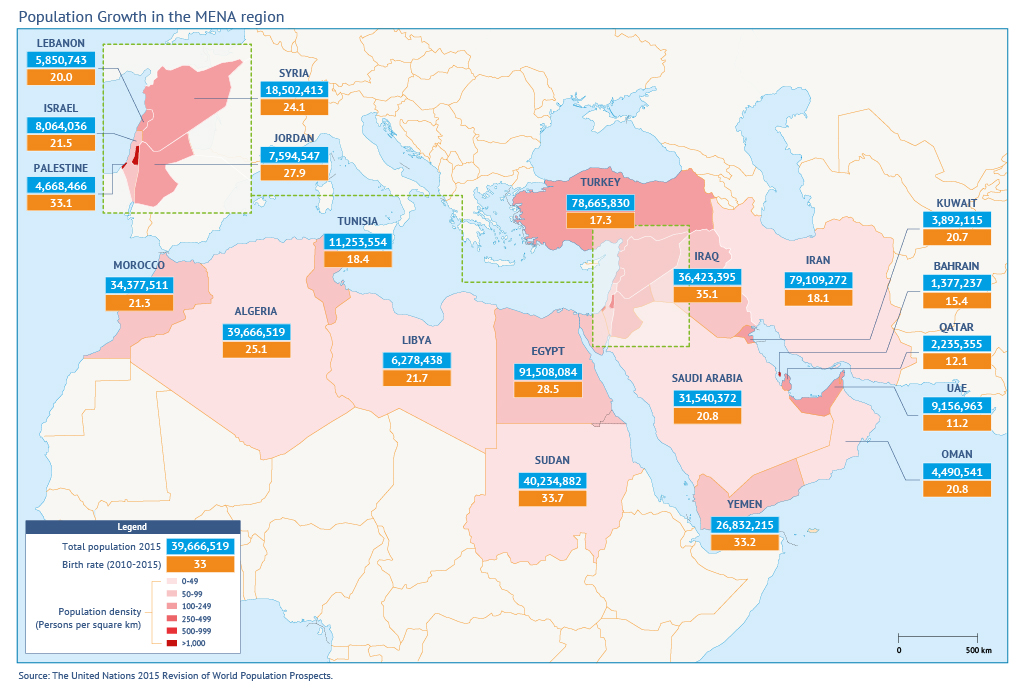 Issues of unemployment, food security, and water security are becoming harder to address, especially the latter, confronted with major risks of shortage, amid the yet-to-be-completed filling of Ethiopia’s new Renaissance Dam, highly disputed by Egypt.

Addressing the public in a conference earlier this year, Al-Sisi called on citizens to keep the limit at two children, and to have gaps of a couple of years between every child.

But experts on population studies remain sceptical on the possibility to reduce growth rates in the next decade, estimating figures to reach at least 150 million by 2050. They point out to two further population problems besides rapid growth: geographical misdistribution, and degrading demographic characteristics.

“Egypt is increasing at the rate of entire nations every year,” Minister of Planning Hala El-Saeed said during the Wednesday conference, who estimated the current rate at 2.7 million new-borns annually.

Article 41 of 2014’sconstitution declares “The state is to implement a population programme that achieves a balance between population growth, and available resources and maximise the investment in human capital, in the context of sustainable development.”

Despite an increase in the GDP, people are unable to properly spend on health, education, transportation, or housing as the state’s vision aims to stop population growth from bypassing its abilities to provide services.

Al-Saeed also pointed out plans to increase women’s participation in the workforce through SMEs, which she said would not only adjust birth rates, but also increases economic growth.

In May, the ministry of solidarity launched a family planning awareness campaign labelled ‘Two are Enough’, aiming at introducing services to marginalised areas. The project includes the launching of planning offices and clinics, across several villages, including in Upper Egypt, as well as a media campaign, with the participation of over 90 NGOs, according to the Minister of Social Solidarity, Ghada Wali.

The initiative targets over one million women under the age of 40, supporting them with job opportunities, literacy programmes, healthcare, and childcare, Wali said in recent press statements.

Maged Osman, director of Baseera, stressed on “Education, empowerment, and employment,” as the three necessary elements to look at, when addressing the problem of overpopulation.

The issue of education has two sides in this context. The first is that the a large population becomes an obstacle to receiving quality services of education, and health.

As Girgis put it, school classes need to either be reduced by half or doubled. At current population growth rates, she estimated the number of classes tobe multiplied by two or three, and the number of teachers by more than double, by 2030.

On the other hand, experts cite illiteracy as one of the factors driving population rates higher. Upper Egypt’sgovernorates, including Minya, Beni Suef, Assiut, and Sohag have the highest illiteracy rates. School drop-outs have also increased in the past few years.

“We are still discussing reading and writing, while the whole world is talking about internet illiteracy,” Girgis commented.

Moreover, the government’s strategies of family planning have always been faced by a counter-religious rhetoric, banning contraceptive methods.

Amr Hassan, secretary-general of the National Population Council, criticised the availabilityof media platforms to religious figures who contradict efforts to reduce population growth. “The people’s compass is lost,” he said.

Last month, a cleric from Al-Azhar appeared on a popular TV show in Sada El-Balad, calling family planning a Zionist conspiracy against Egypt.

“Every year we give birth to what could be a nation on its own, but without resources, education, or patriotism. These people become easy targets for extremist groups,” Hassan argued.

The Egyptian government strategy is focusing on the empowerment of women, by enrolling them into the workforce and encouraging SMEs, in order to reduce birth rates, and contribute to a higher GDP.

Women represent half of Egypt’s population. The age average for marriage was estimated by the CAPMAS in 2015, at 24.5 for women compared to 30 for men. Female in labour force statistics were 23.6%. The CAPMAS figures for 2016 put the illiteracy rate at 14.4% for males, and 26% for women.

Laws on child labour, and child marriage need to be implemented, experts say.

Al-Saeed, called for more awareness campaigns to overcome the problem of people considering children as sources of income. He added that 111,000 girls under 18 are married in Egypt.

Egyptian MP Inas Abdel Halim of the health committee, stated in the conference that discussions were ongoing to raise the legal age of marriage to 21, saying that numerous undocumented child marriages end up in the non-legal recognition of children resulting from such marriages, in addition to high divorce rates.

According to Tayar, the military looks at the number of people in the workforce, to assess whether civilians would be functioning in the state of war, a key to assessing the length of any war.

It also takes count of the available military power, the number of those eligible for service annually,  and those who can be counted as reserve power.

“There are about 35 million available manpower for service, which could make two or three armies,” he stated, adding that another 1.5 million are eligible for service every year.

From a military perspective, the large database of youth is “perfect.”