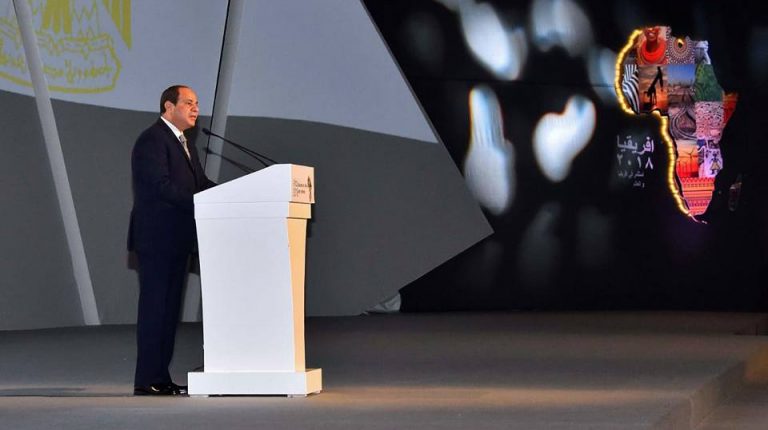 President Abdel Fattah Al-Sisi said Egypt will continue to exert efforts in order to ensure a brighter future for Africa, stressing that the Africa 2018 Forum was a great opportunity to prove Egypt’s desire to protect African interests. The president issued a number of decisions which aim to achieve economic integration in Africa, including the establishment of new funds and measures to facilitate African investment in Egypt.

During his closing speech at the third African Forum on Sunday in Sharm El-Sheikh, Al-Sisi pointed out that the forum allowed for the exchange of viewpoints and ideas about optimum ways to develop Africa, especially its infrastructure as well as creating new job opportunities.

Furthermore, the Egyptian president announced the establishment of the African Risk Insurance Fund to encourage Egyptian entrepreneurs to invest in Africa, and benefit from its massive opportunities. Al-Sisi also said that Egypt is in negotiations with international institutions in order to develop the continent’s infrastructure. He also instructed the acceleration of the establishment of the Cairo-Cape Town road so as to boost the commercial movement within Africa.

The new decrees also included establishing a new investment fund in the information technology infrastructure in Africa, aiming to develop and support technological and digital transformation in the region. Moreover, Al-Sisi launched the second phase of the national anti-corruption strategy 2019-2022 as well as activated the national academy to counter corruption.

He added that all these goals come are Egypt’s priorities during its upcoming presidency of the African Union. The president pointed out that achieving stability, security, and development is the main way to solve political, economic, and social challenges in Africa, as was discussed in the forum sessions. The participants discussed attracting more investments to accelerate the growth of start-ups in Africa.

Egypt’s Minister of Foreign Affairs, Sameh Shoukry, also spoke during the closing ceremony stating that this year witnessed the announcement of the African free trade zone in March, which will be activated in 2019. Egypt also adopted measures to support the African economic integration. He explained that there exists a close relationship between increasing investment and achieving economic integration in Africa in order to meet the Africa Development 2063 agenda.