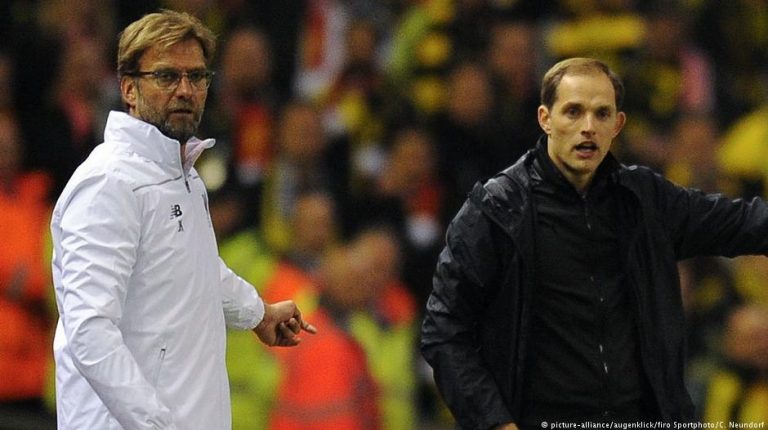 All eyes will be steered towards Group C as Thomas Tuchel and Jürgen Klopp aim to take their clubs into the Champions League knockout stage. Meanwhile, Dortmund look to secure top spot in Group A.The Thomas Tuchel versus Jürgen Klopp storyline dominated the Champions League storyline early in the season, however it's now a distinct possibility that one of them will have to farewell the bright lights of Europe.

Group C promises to once again draw the attention of neutrals around the world, with Liverpool, Paris Saint-Germain and Napoli all still in the running to progress to the Champions League knockout stages.

Only two will succeed, however, and the dreams and hopes of each club could rest on a single goal. Napoli hold advantage, topping the group with nine points, followed by PSG on eight points and Liverpool trailing on six points.

However, and the numerous possible scenarios that could occur have forced coaches, players, fans and media experts to reach for the calculators and scribble down notes in a bid to work out who can progress and how.

Paris Saint-Germain must visit the cauldron of fire that is Red Star Belgrade, while Liverpool welcome Napoli, equal top scorers in Serie A, to Anfield.

The equation is straightforward for Tuchel's Paris outfit: Defeat Red Star Belgrade and they go through, regardless of the result in Liverpool.

A draw or a loss, however, and they would be relying on Liverpool faltering.

For Jürgen Klopp's Reds, any old win won't be enough. To guarantee progression, they have to defeat Napoli 1-0 – in turn somehow keeping the Italian club's potent attack at bay – or they need to win by two clear goals.

But if PSG were to draw in Belgrade – not a totally far-fetched scenario – then any kind of win from Liverpool would hand them a ticket to the knockout stage. Tuchel would then be sweating on goal difference or goals scored in a head-to-head system between the top three sides.

The system may be convoluted, but it's clear that the the odds are stacked up against Klopp and Liverpool to progress.

The Reds have been inconsistent so far in the Champions League, their away form letting them down as they conceded a 90th-minute goal in Napoli before a shock 2-0 defeat in Belgrade. But Klopp is hoping home advantage will see Anfield roar his team home.

"I believe that what you get is what you deserve," Klopp told the Liverpool Echo.

"We shouldn't have lost in Belgrade, with all due respect, but we did and now we have to show we really want to stay in the competition by winning."

"We are going to ask for Anfield and call on the fans to help us – it is a really massive game."

How do you top a derby day victory? For some Borussia Dortmund fans, even a Bundesliga title wouldn't eclipse the feeling of defeating the old enemy.

The 2-1 victory against fierce rivals Schalke in the Ruhr Derby has capped off an incredible start to the season and the club will be basking in the limelight after a first derby victory in three years.

But securing top spot in Group A of the Champions League would end a perfect week for BVB fans as they head towards Christmas at a blistering pace.

Progression to the knockout stages is already secured, however taking first place would most likely hand the club an easier fixture in the Round of 16 next year.

First of all, they need to defeat Monaco, a team they cast aside 3-0 at home in October. Then, they need to rely on Monaco dropping points to Club Brugge.

However, they will have to do without a number of stars after the derby battle took its toll. Match-winner Jadon Sancho will be rested alongside Axel Witsel, while Marco Reus (thigh), Thomas Delaney (calf), Dan-Axel Zagadou (foot), Jacob Bruun Larsen and Lukasz Piszczek (both knee) are all out through injury.

"The game on Saturday at Schalke cost a lot of strength," said the head of Dortmund's licensed player division, Sebastian Kehl.

"Many of [the players] we had to keep going withi over the past few weeks."

Schalke's domestic season went from bad to worse on the weekend after losing the Revierderby.

However, the Champions League has provided brief respite so far and once again offers Schalke a chance to make amends. They've already secured progress to the knockout stages, but a convincing win against Lokomotiv Moscow would at least give them a chance to banish painful memories of the derby loss.