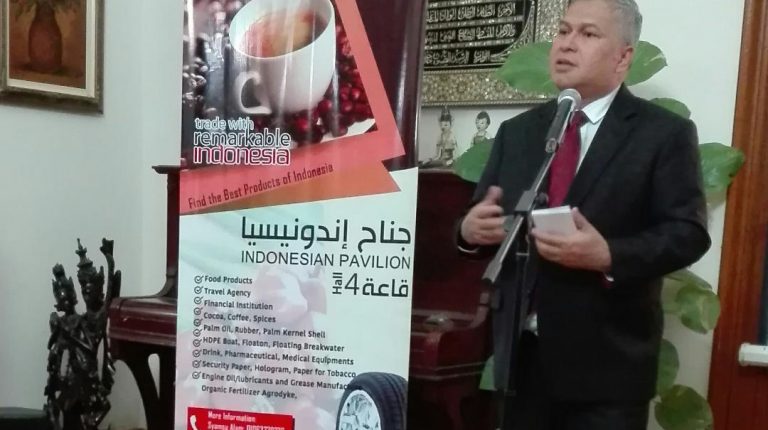 Indonesia’s ambassador to Egypt, Helmy Fauzi, expected Indonesian companies to sign new deals with their Egyptian counterparts during their participation in the first Intra-African Trade Fair (IATF 2018) which Egypt is hosting from 11 to 17 December. He explained that an Indonesian business mission, including about 50 Indonesian businesspersons, are currently in Egypt to attend the IATF.

“Some companies are discussing new agreements with their Egyptian counterparts, and hopefully they will attain tangible deals during the IATF,” the ambassador told Daily News Egypt at a reception held in his residence in Cairo on Sunday, affirming his country’s keenness to participate in several exhibitions which Egypt is organising, including the EDEX and Food Africa.

The ambassador noted that about 16 companies are participating in the IATF, 3 of which are state-owned companies while there are representatives from Indonesia’s Eximbank to discuss providing possible finance.

The ambassador explained that the participating companies at the IATF will display products in various fields such as food, tourism, and defence.

The ambassador asserted his country’s confidence in the Egyptian economy as a gateway into African countries’ markets, adding that Egypt has a strategic location which enables it to be a hub for Africa.

The IATF seven-day fair is a one-of-a-kind event, will showcase over 1,000 exhibitors. Furthermore, the IATF is expected to host over 70,000 visitors, purchasers, and sellers from African and non-African countries, in addition to welcoming African heads of states, and high-level officials, such as trade and industry ministers, finance ministers, and central bank governors, according to data from Egypt’s Ministry of Trade and Industry.

Moreover, the Indonesian embassy facilitated the participation of 75 Egyptian businesspersons in the 33rd Trade Expo Indonesia which was held last October, said the ambassador, adding that Egyptian companies inked deals worth $78.4m, in the 2018’s expo edition while the value was only about $53.5m in 2017’s expo.

Additionally, the ambassador said that Egypt and Indonesia aim to increase tourist numbers between both countries, noting that the annual average of his country’s tourists to Egypt are about 50,000.

However, the ambassador expected around a 10% increase of his country’s tourist numbers to Egypt by the end of 2018.