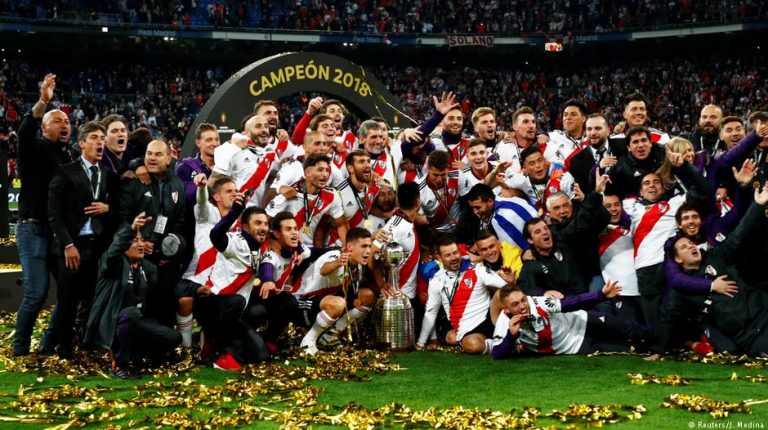 River Plate came from behind to beat bitter Argentine rivals Boca Juniors 3-1 after extra time in Sunday's second leg of the Copa Libertadores final to claim the South American title for a fourth time.

After a thrilling 2-2 drawin November's first leg in Buenos Aires, the second leg was postponed on three occasions and then relocated from Buenos Aires to Madrid, and the supporters of these two storied clubs showed at Real Madrid's Bernabeu stadium why this fixture had been billed as one of football's greatest rivalries.

Both clubs were allocated 25,000 tickets, with 5,000 of those reserved for residents of Argentina, and among the 62,200 in attendance were Lionel Messi, Antoine Griezmann and Diego Godin.

After a tight first half the deadlock was broken just before half time when Dario Benedetto's assured finish put Boca in control. But River struck back through Lucas Pratto on 68 minutes, as the pendulum swung River's way.

Boca's Wilmar Barrios was sent off a minute into extra time for a rash tackle and their misery was compounded in the 109th minute when a sublime goal from Juan Fernando Quintero gave River the lead.

in a game low on quality but high in entertainment, an increasingly desperate Boca threw everything at their opponents in search of an equalizer and Boca came agonizingly close to leveling when Leonardo Jara's deflected shot flicked off the outside of the post.

Gonzalo Martinez wrapped up the 5-3 aggregate victory for River with the last kick of the game, racing clean through to stroke the ball into an empty net after Boca keeper Esteban Andrada was committed upfield.