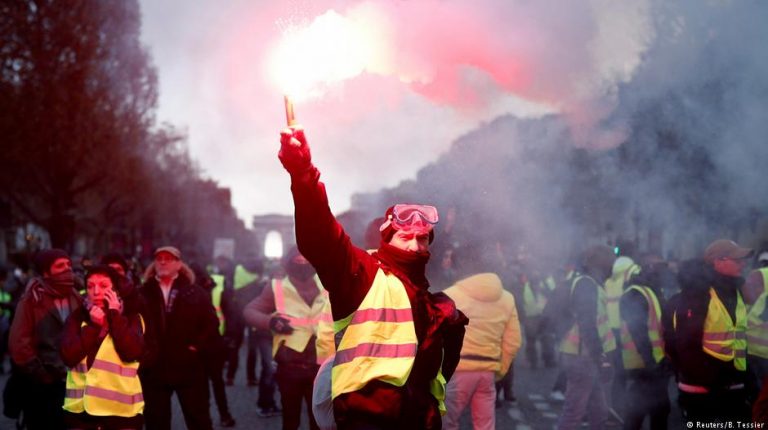 French intellectuals agree on the fact that the “yellow vest” protest movement is a symptom of society’s fractures, but interpretations are divided: Is it utopian direct democracy or a dangerous populist drift?While most of the French population condemns violent acts associated with the "yellow vest" ("gilets jaunes") movement, named after the security jackets all car drivers must carry in their vehicle in France, the vast majority supports the protesters.

The movement started on November 17 as a direct protest against French President Emmanuel Macron's announced tax on fuel, a measure that would have directly affected the working class. The president's decision to eliminate a tax on assets for France's richest also contributed to incensing the movement.

Even though the government scrapped the fuel tax in reaction to the protests, the disparate movement has not slowed down. Other demands include taxing the rich, raising minimum wage or even having Macron resign.

The 40-year-old president decided to address the nation for the first time on Monday, after four weeks of demonstrations.

France is known as a country with a strong tradition of protest, which is why comparisons with the May 1968 student uprising and even with the Revolution of 1789 are inevitable.

However, some of the actors at the center of the student movement back in 1968 are quick to disparage the current protests as a movement that's dangerously attracted to authoritarianism.

A student leader during the unrest of May 1968 in France, French-German politician and author Daniel Marc Cohn-Bendit, who is now close to President Emmanuel Macron, points out that at the time, the protesters wanted to get rid of a general — Charles de Gaulle. "Today these people want to put a general in power," he told The Observer, referring to the fact that "yellow vest" spokesperson Christophe Chalençon has called for Macron's resignation to replace him with a "true commander, such as General De Villiers," the former chief of defense who resigned in 2017 after a disagreement with Macron.

Filmmaker Romain Goupil, another leader of the 1968 student movement, also describes the current protests as an "upside-down May 1968." "Our objectives were to change the society of consumption," while the "yellow vests" call for lowering taxes on fuel, he told France Info. "There is something nihilist in these demonstrations. There is no hope at all; it is not as joyful as May '68."

A rejection of intellectualism

As the "yellow vest" demonstrators are predominantly from the white working class, populist politicians such as Marine le Pen from the far-right National Rally (previously the National Front) and Jean-Luc Melenchon, who runs the far-left movement La France Insoumise (France Unbowed) have prominently shown their support.

"I hear people from la France Insoumise, talking about this being a great people's revolt and how the people are speaking, but these are the same ordinary people who pushed Trump into power," Cohn-Bendit said.

On the other hand, a series of authors and thinkers recognize the movement as a truly democratic one. These thinkers criticize opinion-makers who are too quick to categorize the protesters based on their political alignment.

"If one feature of any truly revolutionary moment is the complete failure of conventional categories to describe what's happening around us, then that's a pretty good sign we're living in revolutionary times," wrote anthropologist and activist David Graeber, best known for his book Debt: The First 5000 Years, in French newspaper Le Monde. "Intellectuals have for the most part done an extremely poor job understanding these changes."

The voice of the invisible

Edouard Louis, Didier Eribon and Annie Ernaux, three authors who have directly experienced life in small town France and described it through acclaimed autobiographical works, have all expressed their support for the movement.

"Right from the start of this movement we have seen 'experts' and 'politicians' in the media belittling, condemning, and mocking the 'gilets jaunes' and the revolt that they embody," wrote Edouard Louis in French cultural magazine Les Inrockuptibles. He rather saw in the protesters "bodies who almost never appear in the public and media space — suffering bodies ravaged by work, by fatigue, by hunger, by the permanent humiliation of the dominated by the dominant, by social and geographical exclusion."

Having grown up in a poor environment, the author of The End of Eddy therefore felt "personally targeted by the contempt and the violence of the bourgeoisie, which immediately came down on this movement."

Louis concludes that the initiative "must continue, for it embodies something right, urgent, and profoundly radical, because faces and voices that are usually reduced to invisibility are finally visible and audible."

Similarly, Didier Eribon, author of Returning to Reims, a memoir about growing up in a working-class family that lived in provincial public housing, also believes the way the movement is portrayed is decisive.

During the student congress of the Left Party held in Berlin on Saturday, the French author said the "yellow vest" initiative needed to be claimed as a leftist movement. It's "a left-wing movement because it's protesting against neoliberalism and social violence," he said. "Reframing the picture of the movement means to reframe the meaning of the movement."

While she does not share all of the ideas of the movement, award-winning author Annie Ernaux sees in it "an insurrection against a power that despises, a government that ignores the life of people." Macron's arrogance can not only be felt in his policies, but in his words too — in one famous gaffe, he opposed "people who succeed" to those "who are nothing."

Ernaux feels that the strongest move Macron could make would be to reestablish the solidarity tax on wealth, but she believes "he won't do it," she told Liberation.

Thomas Piketty, a French economist specialized in wealth and income inequality, also analyzed in Le Monde the impact of the suppression of the solidarity tax on wealth, which applied to those in France having assets above €1,300,000 (nearly $1.5 million).

While the fuel tax was sold by the government as an ecological measure, it was also a way to compensate for the billions of euros lost through the scrapped tax on wealth, the author of Capital in the Twenty-First Century explained.

"Inevitably," Piketty wrote, this approach privileging the rich has led many people to feel "abandoned and humiliated by the Macronian discourse, and this is how we find ourselves in the present situation. The ruling power has made a series of factual, historical and political errors, which must urgently and can be corrected today."