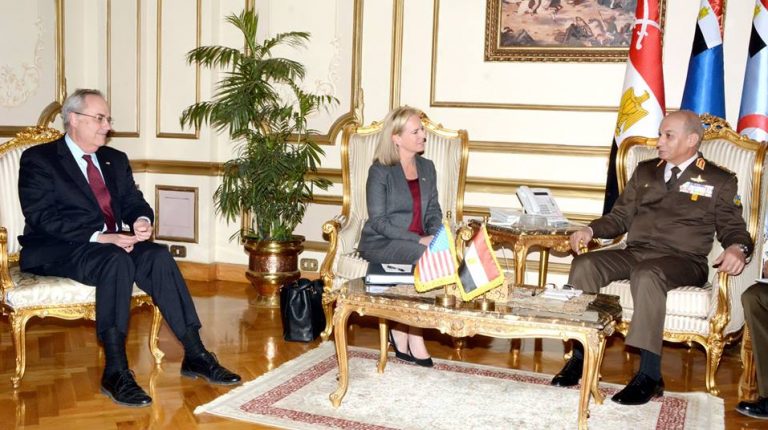 Egypt’s Defence Minister General Mohamed Zaki met with US Secretary of Homeland Security Kirstjen Nielsen who is currently in Cairo in official visit.

During the meeting, both leaders discussed issues of mutual concern as well as the latest developments in the region. The discussions also addressed ways to boost cooperation between the two countries in the fields of security, exchange of information and combating transnational crimes.

Zaki praised high-level coordination between Egypt and the US in the military and security fields, while Nielsen asserted the depth of relations between the two countries in different fields

The meeting was attended by a number of leaders of the armed forces and acting US ambassador in Cairo.

Last week, President Abdel Fattah Al-Sisi met with the Director of US National Intelligence, Dan Coats, in the presence of the Chief of Egyptian General Intelligence Service, and discussed enhancing security, intelligence cooperation.

This meeting came on the sidelines of Egypt’s first international and regional defence exhibition, Egypt Defence Expo (EDEX), with the attendance of the defence ministries of 10 countries including France, Greece, the UAE, Oman, Sudan, Cyprus, and Cameron.

The EDEX, the first of its kind in Egypt, North and Central Africa, hosts more than 300 exhibitors who showcase the latest technology, equipment, and defence systems on land, sea, and air. Additionally, over10,000 industry visitors are expected to attend the event.