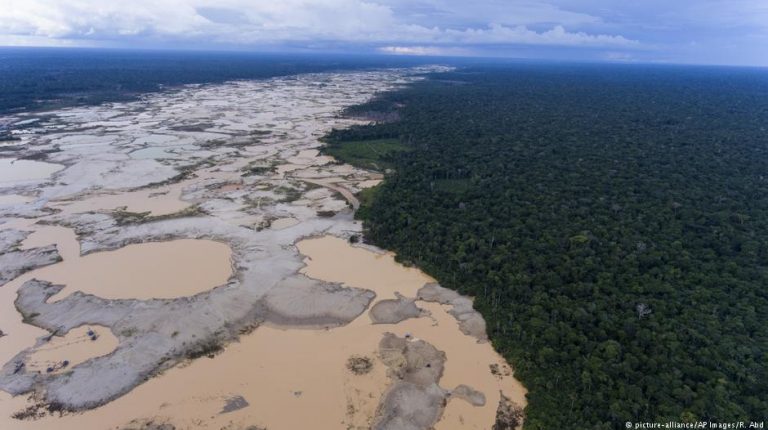 An increase in small-scale gold mining has taken a toll on the Amazon, increasing deforestation and polluting waterways, according to a new report. Mining in protected indigenous areas has increased exponentially.An increase in illegal gold mining in the Amazon rainforest has reached "epidemic" proportions, a study has revealed.

The report, released by the Amazon Socio-Environmental Geo-Referenced Information Project (RAISG) on Monday, exposed the damage that illicit mining for gold has had on forest and waterways, as well as on the life of indigenous tribes in the area.

"The scope of illegal mining in the Amazon, especially in indigenous territories and protected natural areas, has grown exponentially in recent years, with the rise in the price of gold," said Beto Ricardo, head of the RAISG.

An increase in gold prices over the past decade following the global recession has set off a gold rush, with hundreds of thousands of illegal miners pouring into the Amazon to reap the benefits.

The methods used to mine gold have taken their toll on the environment. Mercury, which is used to separate gold from grit, has poisoned the rivers, the RAISG report said.

When mercury seeps into soil, rivers and the food chain, it can cause serious health problems for the people who live in the area. The study highlighted some 55 illegal mining sites in protected areas, home to indigenous communities.

"Illegal mining can kill us," said Agustin Ojeda, an indigenous leader of Venezuela's Shirian people, as quoted in the report.

"The mining wells allow for the reproduction of mosquitoes that bring diseases, such as malaria. The effect of mercury on water isn't taken seriously either. It not only contaminates water but also the fish we eat," he explained.

One of the worst-hit areas is home to the Yanomami indigenous people, who live in a territory that stretches between Brazil and Venezuela.

Mining could expand in Brazil

He has also expressed support for a relaxation of environmental licensing processes for infrastructure projects and other businesses. This could have a major impact in the region, as Brazil is home to the world's largest rainforest in the Amazon.

"The public narrative is to clear the area [of forests], weaken those institutions that monitor and control in favor of agribusiness and mining for the production and export of commodities, which will hasten the deterioration of the forest," Ricardo said.

Backed by a powerful agribusiness lobby, Bolsonaro has been heavily criticized by environmental groups for his plans and also his dismissal of climate change concerns.