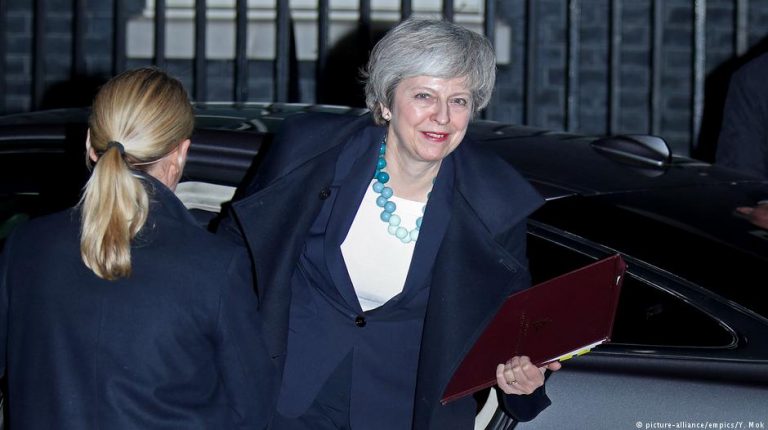 British PM Theresa May is headed to Berlin to meet with Chancellor Angela Merkel in an attempt to salvage her Brexit deal. The last-minute Europe trip comes a day after she delayed a parliamentary vote on the draft deal.Prime Minister Theresa May is headed to mainland Europe for talks with Dutch Prime Minister Mark Rutte and German Chancellor Angela Merkel to discuss concerns raised by British lawmakers about her faltering Brexit plan.

"I will now do everything I possibly can to secure further assurances […] and discuss with them the clear concerns that this House has expressed," May told Parliament on Monday, after she delayed a parliamentary vote on a draft exit deal which had already won the backing of the EU's 27 other political leaders.

The United Kingdom's political crisis over its planned departure from the European Union intensified Monday when it became clear May's draft deal would have been rejected "by a significant margin."

"It is clear that while there is broad support for many of the key aspects of the deal, on one issue, the Northern Ireland backstop, there remains widespread and deep concern," May said in a speech to the House of Commons on Monday.

Many hard-line Brexit lawmakers oppose the backstop, which aims to keep an open border between the UK province of Northern Ireland and the Republic of Ireland, an EU member state. They fear it could force the UK to adhere to EU rules indefinitely.

"It is the right deal for Britain, I am determined to do all I can to secure the reassurances this House requires to get this deal over the line and deliver for the British people," May said.

After May's delay on Monday, Jeremy Corbyn, the leader of the Labour opposition party, said the UK no longer had "a functioning government."

"The government has lost control of events and is in complete disarray," he said.

"With the fiasco today, the government has really lost all authority. I and my colleagues will fully support the leader of the opposition if he now proceeds to a no-confidence vote as duty surely calls," said Liberal Democrat leader Vince Cable.

EU leaders have repeatedly said they would not reopen negotiations over the draft deal.

After the debate in London concluded on Monday evening, European Council President Donald Tusk took to Twitter to say he was calling a council meeting on Brexit on Thursday. "We will not renegotiate the deal, including the backstop," he wrote. "But we are ready to discuss how to facilitate UK ratification."

Tusk emphasized that time ahead of key votes in January and the scheduled exit in March was short: "As time is running out, we will also discuss our preparedness for a no-deal scenario."

Irish Prime Minister Leo Varadkar said separately that he and Tusk had agreed that the existing draft was the best deal possible and that it could not be renegotiated.

"Preparations for a 'no deal' outcome should intensify," he added.

German Foreign Minister Heiko Maas said the UK and the EU had worked hard on the draft and that he could "not see what should be changed" in further negotiations. "We want an orderly Brexit," he said.

May's announcement came after the EU's top court ruled that London could unilaterally cancel its decision to leave the EU. Some pro-EU lawmakers have called for a second referendum to ask the public whether or not to remain in the EU.

But May warned in her speech that a second referendum would risk deepening divisions and merely lead to calls for a third referendum. She also said there was no other possible exit deal that would secure a parliamentary majority.

Britain's pound currency fell to $1.25, its weakest level against the US dollar since April 2017, and to €1.10 in the wake of May's announcement.