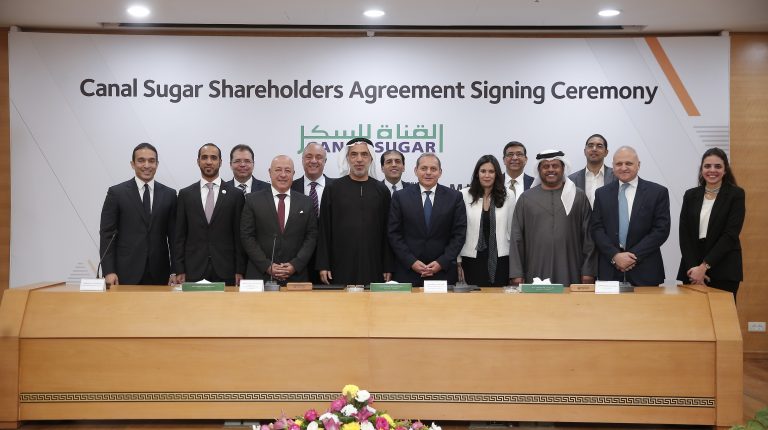 Al Ahly Capital Holding, the investment arm of the National Bank of Egypt, successfully completed a $1bn deal with Al Ghurair Group and the UAE’s Murban, to reclaim and cultivate 180,000 feddan in south Minya, in order to establish the world’s largest beet sugar factory.

The agreement was signed by Hisham Okasha, chairperson of the company and the National Bank of Egypt, with the representatives of Murban company, and the Emirati investor Gamal Al Ghurair, who is the project’s founder, the chairperson, and the managing director of El Canal Sugar Co.

Al Ghurair allowed new UAE investors to enter, bringing the UAE’s contribution to 70% of the capital, worth EGP 5.4bn, while Al Ahly Capital contributes to 30%.

The project is an integrated agricultural and industrial project, which includes the reclamation of 180,000 feddan to cultivate beet, wheat, and maize. The project will also establish the world’s largest beet sugar factory, with a capacity of 1m tonnes per year, significantly contributing to bridging the consumption and production gap, which amounted to 1m tonnes in 2018. The project will also cut imports by $800m per annum.

According to Okasha, this deal confirms the ability and strength of the Egyptian economy to attract foreign investment in all fields, especially in the fields of agriculture and industry, after the implementation of the reform policy carried out by the state in recent years, stressing that the project is aligned with the government’s economic programme.

He added that Al Ahly Capital Holding’s contribution to the project comes within the framework of the National Bank of Egypt and its subsidiaries to continue their strategic role in support of major projects of economic feasibility, and policies aiming to reduce imports and increase exports, thus reducing the pressure on the state’s foreign currency’s resources, hence supporting the country’s economy.

According to Al Ghurair, the project will provide 2,500 direct and indirect jobs during the construction period, as well as 1,500 permanent jobs, and 50,000 indirect jobs through contractual agriculture. He noted that the project enhances opportunities for economic cooperation between the UAE and Egypt, and serves as an ideal model, for further joint investment projects between the two brotherly countries.

Al Ahly Capital Holding is the financial advisor to the project. The company is currently negotiating with foreign banks, as well as export credit agencies in several countries to finance the dollar-denominated needs of the project, which are 50% of the total cost, estimated to be $700m. The remaining financing will be covered by local banks.