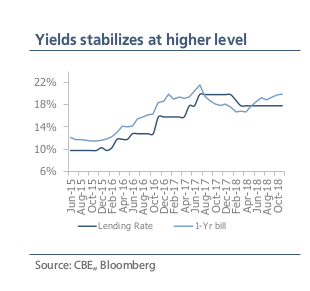 Beltone Financial announced in a recent report that it still maintains its view of a stable interest rates environment in the upcoming Monetary Policy Committee meeting of the Central Bank of Egypt (CBE) on 27 December.

Beltone expects yields to remain above 19%, which will keep Egypt’s fixed income market attractive amidst the tightened monetary policy environment in the emerging markets.

In terms of inflation, the November annual headline inflation decelerated to 15.7%, down from October’s reading of 17.7% and below Beltone`s estimates of 17.5%.

“This was driven by a lower rise of 18.7% in food prices, down from 20.2% in October, which we attribute to the slowed rise in fruits and vegetables prices, 47.9%, down from a peak of 52.7% in October. Food inflation was coupled with the slowdown in tobacco and alcohol prices with a rise of 10.2% against 22.9% in October. Annual core inflation eased as well to 7.94%, down from 8.86% in October,” according to Beltone.

This was driven by a decline in food prices by 1.8%, against a rise of 3.5% in October with the 5.8% decline in fruits and vegetables prices.