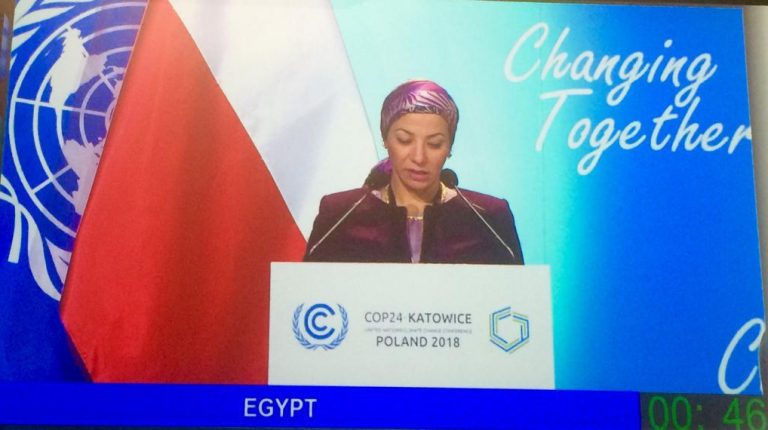 Minister of Environment, Yasmine Fouad, stressed the necessity to commit to the principle of mutual responsibility, and instantly and fairly achieve the commitments of Paris Agreement in order to avoid any harm to the developed countries.

Fouad gave Egypt’s speech before the 24th Conference of the Parties to the United Nations Framework Convention on Climate Change (COP24). She said that budgets of the developed countries including Egypt, bear high burdens for combating and adapting with the climate change impacts.

The minister pointed out that Africa is not among the highest emitters participating in climate change emissions, but unfortunately it is one of the most affected places by the harmful emissions, according to scientific and official reports.

The United Nations Climate Change Conference (COP24) to UN Framework Convention on Climate Change (UNFCCC), was launched two weeks ago in Katowice, Poland. The summit aims to finalise the implementation guidelines for the Paris Climate Change Agreement. Holding the COP24 came following a year of devastating climate disasters around the globe.

Moreover, Fouad participated in the coordinating meeting of the Arab negotiators and partook in the COP24 during the summit. The meeting discussed coordinating the Arab positions regarding climate funding and adapting with climate change impacts.

She stressed that the Arab group, African group, and Group of 77 and China, share the same concerns, and Egypt will exert greater efforts to achieve the fair demands of the developed countries in the frame of the Paris Agreement.

Egypt is the current president of the 14th Conference of the Parties of the Convention on Biological Diversity (CBD COP14), as well as the Group of 77 and China.

Furthermore, Egypt and Germany were elected by the presidency of the COP24, to lead the negotiations regarding the convention’s funding, after the failure the negotiations.