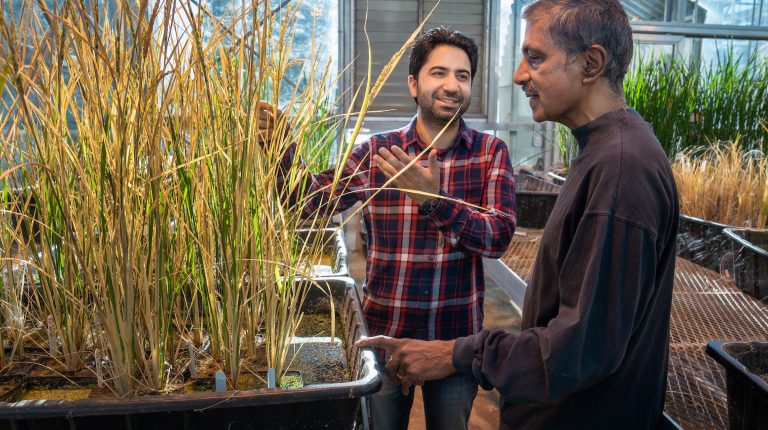 Rice is a main food source for most of the world’s population, including Egypt, yet rice cultivation is particularly water intensive, using an estimated of 2,500 litres of water per one kg of rice produced.

However, almost half of the global rice crop is derived from rain-fed agricultural systems, where drought and high temperatures are predicted to become more frequent and damaging under climate change.

Recently, a team of researchers and plant biologists from the University of California, Davis (UC Davis) have discovered a new way to make crop plants replicate through seeds as clones. The new way depends on asexual reproduction through seeds.

Asexual engineering in rice is totally new, as rice is a plant that normally reproduces sexually. According to the study published in ‘Nature’ journal, the findings demonstrated the feasibility of asexual reproduction in crops, and could represent a significant development in agricultural plant’s breeding.

The discovery, long sought by plant breeders and geneticists, could make it easier to propagate high-yielding, disease-resistant, and climate-tolerant crops, making them available to the world’s farmers.

The findings of the study suggested a major breakthrough for the world’s agriculture, through the ability to produce a clone, an exact replica of a plant, from its seeds.

The new technique gives farmers in developing countries an opportunity for replanting seeds from their own hybrid plants, deriving the benefits of high yields year after year, instead of purchasing expensive hybrid seeds each year.

According to the research, over 400 species of wild plants can produce viable seeds without fertilisation in a process called apomixis. This process seems to have evolved many times in plants, but not in commercial crop species, such as rice and wheat.

Hybrids can result in higher crop yields due to greater genetic variety. However, the process that triggers the generation of embryos post-fertilisation is not well understood in plants. These hybrids can have superior qualities in areas such as yield or pest resistance. But the seeds of hybrid crops do not produce plants with the same qualities.

The process depended on several steps for reaching their target. The first step was identifying that the gene BABY BOOM 1 (BBM1), carried by sperm cells, is a key to the production of embryos, even in the absence of fertilisation. The authors then used CRISPR/Cas-9 genome editing, to eliminate meiosis, a cell division that produces reproductive cells, in rice strains that expressed BBM1 in egg cells.

The research was conducted by Postdoctoral Researcher Imtiyaz Khanday, and Venkatesan Sundaresan, a professor of plant biology at UC Davis, as well colleagues from UC Davis, the Iowa State University, and the INRA in France.

Sundaresan described the findings of the study as “a very desirable goal that could change agriculture,” he pointed, “So we have a diploid egg cell with the ability to make an embryo, that grows into a clonal seed.”

According to Sundaresan, the process has an efficiency of about 30%, and he, along with his team, hope that it can be increased with more research. The technique could be applied in other cereal crops which have equivalent BBM1 genes, and in other crop plants.

Recently the Egyptian government decided to decrease the area of cultivated land of rice due to the shortage of water resources, amid the Nile river’s dispute with Ethiopia. The government justified its resolution, due to rice’s high water consumption.

Professor of Genetics at the Faculty of Agriculture in Zagazig University, Said Soliman, was working for a long time in progressing new species of rice that resist drought and use less amounts of water.

Soliman told Daily News Egypt that he has developed a species of rice named “Oraby”, after the political leader Ahmed Oraby who is the symbol of Zagazig university. The duration for that species of engineered rice takes about 120 days, comparing to 145 days for normal rice. He added that Oraby rice could be cultivated twice a year.

Oraby rice could be cultivated in all kinds of land, as it was successfully cultivated in Tushka in sandy soil, as well as in clay soil.

According to Soliman, it is possible to cultivate two million feddan of the engineered rice with the same amount of water allocated to irrigate 1m feddan of normal rice, and the Oraby rice will achieve an increase in productivity by 2m tonnes of rice, meaning 1 tonne per feddan.

According to a new study by scientists from the University of Sheffield in England, the engineered rice has low stomatal density, uses just 60% of the normal amount of water, and is able to survive drought and high temperatures for longer than unaltered plants. The study revealed that the engineered rice plants have fewer stomata—tiny openings used for gas exchange—have more tolerance to drought, and resilient to future climate change.

The researchers of the study which was recently published in ‘New Phytologist’ journal discovered that engineering a high-yielding rice cultivar, reduces stomatal density, helps the crop conserve water, and survive high temperatures and drought.

Like most plants, rice uses microscopic pores called stomata to regulate carbon dioxide uptake for photosynthesis, along with the release of water vapour via transpiration. When water is plentiful, stomatal opening also permits the regulation of plant temperature by evaporative cooling. Under water-limiting drought conditions, stomatal closure normally slows down water loss. Low stomatal density rice conserves its water better under drought, and so has more water left to cool itself when necessary.

Lead author of the study and Professor of Plant Molecular Biology, Julie Gray, said that “Stomata help plants to regulate their water use, so this study could have a significant impact on other crops which are at risk under climate change. At the University of Sheffield, we believe in a sustainable future and work towards solutions to the most pressing global challenges.”

“Future predicted decreases in water availability, combined with increased frequency of extreme drought, and high temperature events, are likely to present particular challenges for farmers – resulting in substantial crop loss,” said Robert Caine, research associate from the University of Sheffield’s Department of Molecular Biology and Biotechnology, and principal investigator of the study.

Caine added, “Our study has shown that rice plants with fewer stomata are drought tolerant and more conservative in their water use. This means they should perform better in the future under climate change conditions,” explaining, “We found that the engineered rice crops gave equivalent or even improved yields, which means it could have a massive impact on our future food security which is threatened by climate change.”

According to the paper, the low stomatal density rice plants were able to survive drought and high temperatures of 40 °C for longer than unaltered plants, when grown at elevated atmospheric carbon dioxide levels.