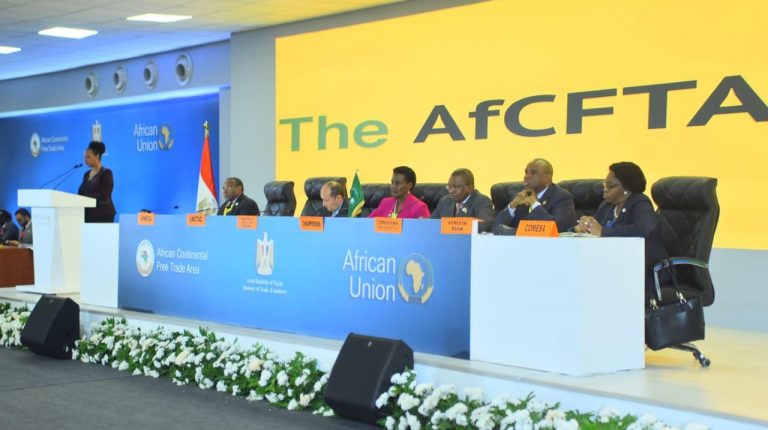 Secretary General of the COMESA Chileshe Kapwepwe said that the Tripartite Free Trade Area (TFTA), was launched in Egypt in Sharm-El-Sheikh in June 2015. Egypt therefore occupies a special place in the history of regional integration in Africa.

During the meetings of the African Continental Free Trade Agreement (AfCFTA)Negotiating Institutions held Wednesday, Kapwepwe added that at the time of its launch, three of the 10 annexes to the TFTA Agreements had not been completed. Several rounds of negotiations later, the TFTA is ready for implementation.

All the annexes to the agreement have been finalised. Some 61% of the rules of origin have been agreed and the exchange of tariff offers is near complete, with most member/partner states, opting to extend their respective Regional Economic Communities (REC) acquired in the TFTA, she elaborated.

“Tripartite trade facilitation instruments including certificate of origin and import, and export declaration documents are all ready, she pointed out. “This means that trading in the TFTA, can commence as soon as the ratification threshold is attained.”

Kapwepwe added, “The TFTA is a unique integration initiative. By bringing together countries that are already in the FTAs, the TFTA has allowed member/partner states to consolidate the gains achieved in their respective RECs but on a larger and more dynamic market space.”

The Secretary General disclosed that the TFTA is a complete developmental package, that is based on three pillars of market integration, industrial development, and infrastructure development.

For his part, Albert M Muchanga, African union (AU) commissioner for the Department of Trade and Industry, said that by the end of 2021, the full restructuring of the AU would be completed, leading to better work within the African continent at the level of commissioners.

Muchanga pointed out that in light of the efforts exerted to speed up the implementation of the TFTA (COMESA-SADC-ECA), it is expected to be completed in one year instead of 5 years in order to benefit from all the trade possibilities in the African continent.

He stressed the necessity of establishing African common markets, especially digital ones, as well as encouraging networking between investors, which opens the way for job opportunities for youth especially in the field of industry because of its importance.

He confirmed the need to pay attention to packaging operations in order to improve the quality of African products.

The TFTA would only be complemented by a common market, protection of individuals, the right to transfer, the protection of competitiveness, investment, and African intellectual property rights.