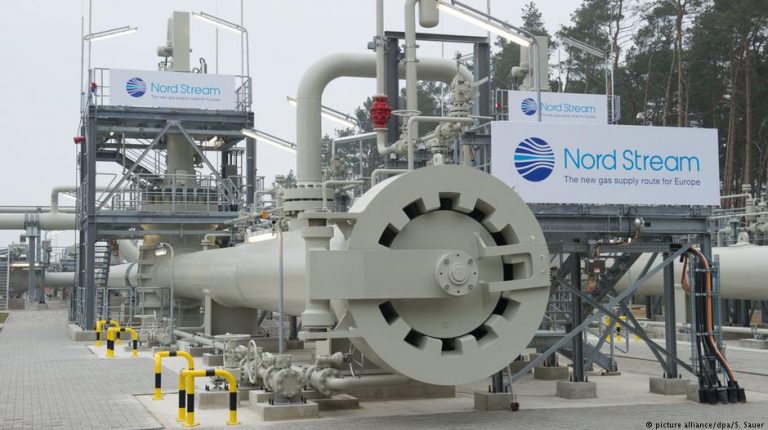 The green movement has very little in common with US President Donald Trump. But both are moving against the beleaguered Nord Stream 2 pipeline that is now being built to send Russian gas to Europe.While it came as no surprise this week when the district court in St. Petersburg, Russia, dismissed a lawsuit filed by Greenpeace against the underwater gas pipeline linking Russia and Germany, the claims made by the environmental NGO are finding stronger echoes from Berlin to Washington.

Annegret Kramp-Karrenbauer, the successor to German Chancellor Angela Merkel as head of the Christian Democrat Union (CDU) party, said recently that one option to the increasingly politicized Nord Stream 2 pipeline could be to reduce the quantity of gas flowing through it. A "soft Nord Stream 2" — to adopt a Brexit allegory — and one that would please no one.

German Foreign Minister Heiko Maas, a member of the Social Democratic Party (SPD) — junior partner in Merkel's coalition — was quick to disagree, saying the pipeline was a commercial project that would continue even if German firms pulled out. Furthermore, the project would give Berlin leverage in Moscow.

This takes place against a backdrop of US attempts to undermine the pipeline. President Donald Trump has argued it cramps Europe's room for maneuver in relation to Russia. Trump has sought to sell the idea of US liquefied natural gas (LNG) imports to replace imports from Russia.

Read more: Nord Stream 2 gas pipeline – What is the controversy about?

As the politics heats up, the project's ecological impact increasingly comes to matter.

Greenpeace and other environmental groups say construction of Nord Stream 2 has been polluting Germany's Baltic coast with toxic grease found on beaches and in the sea.

People living near the Bay of Greifswald in northeastern Germany started telling authorities in June about "tennis ball-sized" lumps of pink-purple oil washing ashore, some of it into areas covered by the European Union's Natura 2000 environmental protection program.

The German Environment Ministry said the sludge may be coming from the pipeline's construction works. The consortium building the pipeline has since cleaned up the waste.

"Unfortunately, there was a grease spill incident in the Bay of Greifswald in June this year," the Nord Stream 2 spokesman Jens Müller told DW, adding that up to 140 kilograms (308 pounds) of grease, used to lubricate moving pieces on a dredger, were released.

"In close coordination with the authorities, experts working on behalf of Nord Stream 2 collected more than 100 kilograms. We stopped all works, inspected all dredgers again and replaced all fluids with biodegradable ones. We have sent inspectors to the vessels to control all procedures. The measures exceeded existing standards," Müller noted.

NABU, a Berlin-based environmental NGO, says the pipeline is a disturbance to five Natura 2000 sites in coastal areas and the Exclusive Economic Zone (EEZ) in Germany. "Due to dredging activities, plants and animals living at the sea floor are killed," Anne Böhnke-Henrichs, from NABU's marine conservation team told DW.

She says the pipeline trench is up to 80 meters (262 feet) wide, requiring 2.5 billion tons of sea floor sediments to be dredged, releasing about 250 tons of bioavailable phosphorous that is stored in the sediments. "The phosphorous acts as further fertilizer in an already over-fertilized Baltic environment," she added.

As a result, algae bloom more quickly, and when they sink to the seafloor and decompose, oxygen is consumed. Too great an oxygen consumption, in turn, results in hypoxic or anoxic conditions, killing plants and animals in a larger area of the Baltic Sea, NABU stressed.

The environmental organization is now pursuing a lawsuit against the pipeline consortium, claiming that the environmental impact assessment for the pipeline was incomplete. It argues that the restoration of destroyed seafloor habitats will take much longer than estimated by Nord Stream 2, and that wintering sea ducks and noise sensitive harbor porpoises are disturbed by construction activities.

However, Nord Stream 2 spokesman Jens Müller highlighted the benefits of the pipeline for combatting climate change.

"Using all the gas transported through Nord Stream 2 for power production instead of coal would save the CO2 emissions of 4 million average cars," he told DW on the sidelines of the COP24 climate change conference, currently being held in Katowice, Poland.

He also said it is interesting to contrast the amount of grease with the amount of unprocessed sewage coming into the Baltic from the rivers and from agricultural runoff.

"If you compare the amount of dredging we do with that of the neighboring Polish LNG terminal, we moved less than one tenth of the amount of sediment," he explained.

According to data released by the consortium, the phosphorous temporarily released from the seabed during the eight months of construction is less than 5 percent of what the Oder river deposits every year in the Baltic or what a winter storm season releases from the seabed.

Moreover, the operators are investing in additional sewage processing at sewage plants in northeastern Germany, which will "reduce the nitrate and phosphorous emissions permanently," with the aim of creating a "tangible effect on the water quality" in the Bay of Greifswald.

Meanwhile, courts in Russia, Finland and Germany have all dismissed the claims by Greenpeace and other environmental groups. They've found that the countries involved in Nord Stream 2 have thoroughly assessed all environmental impacts and have issued permits that certify the environmental compatibility of the project.