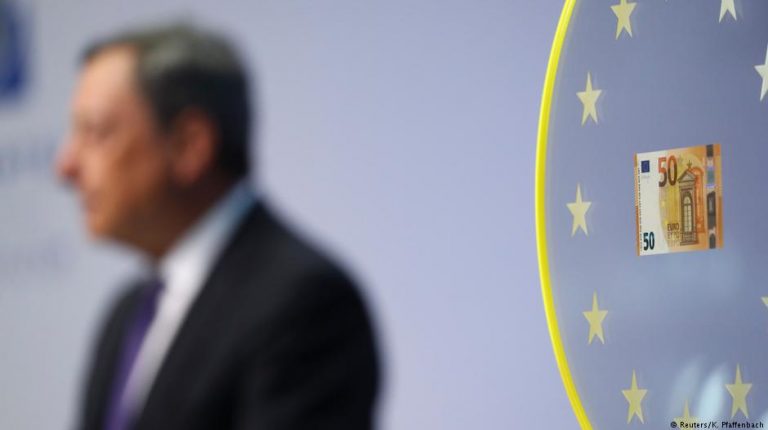 The European Central Bank looks has removed a key pillar of its support for the euro area economies. At their final policy meeting this year, ECB governors announced the end of their bond-buying program.A sum totaling €2.6 trillion ($3 trillion) is not easy to understand. It's a mind-boggling figure that's hard to wrap your head around.

By all standards, $3 trillion is a staggering amount of money, and exactly the sum that the European Central Bank (ECB) has spent in just under four years on the purchase of both government and corporate bonds.

Putting the markets at 'quantitative ease'

The bank's program, which has been dubbed quantitative easing (QE), has had the purpose of pumping vast amounts of cash through financial institutions and on to the real economy to cushion the impact of the global financial crisis, avoid a credit crunch and get the battered eurozone economies back on their feet again.

Thursday's policy meeting of ECB governors marked a historic moment for the central bank as it said it would officially bring its unprecedented bond-buying scheme to a close, come the end of December.

Not a dull moment

Market experts and analysts will later today be watching ECB President Mario Draghi's final news conference with bated breath, looking for explanations as to why the end to the asset purchases will come despite a somewhat gloomier economic outlook for the months ahead.

2017 was a good year for the 19-member eurozone, with member countries experiencing strong growth and reviving labor markets, seeing unemployment going down considerably. The momentum was partially carried over into the first half of 2018, but first clouds started to appear in the fall of this year.

Europe's economic powerhouse, Germany, for instance saw its growth shrink in the third quarter for the first time since 2015 when the ECB launched its ambitious QE program. The euro area as a whole expanded by just 0.2 percent in the July-September period, marking a sharp slowdown.

The eurozone faces a number of immediate risks stemming from developments on the Continent. There's the continued row between the European Commission and the Italian government over Rome's 2019 spending plan and the 2.4 percent of fresh borrowing it involved originally.

Fears of the impact of a Brexit no-deal scenario add to the current uncertainties, as is the severe trade conflict between the United States and Canada.

How much would it hurt?

So, is the eurozone economy really prepared for the ECB pulling the plug on cheap money supplies? It is, in the eyes of the ECB chief, who's unwilling to read too much into what may just be a temporary weakness.

Speaking to EU lawmakers recently, Mario Draghi brushed aside the third-quarter dip in growth, arguing it was largely due to one-off effects such as delayed car deliveries following the introduction of a new time-consuming emissions test cycle, WLTP.

Some hope is also derived from Washington's and Beijing's agreement to hold off from escalating their trade row for 90 days, plus the fact that the Italian government has offered to tone down its draft budget.

But even now that the ECB decided to bury its bond-buying program, it would not really have to stop completely come January of next year.

This is because the central bank looks poised to reinvest the proceeds of its maturing QE bonds for an unspecified time. According to the Financial Times, this means the bank "would still buy around €20 billion of bonds a month" to stabilize financial markets and hold down borrowing costs for governments and companies alike.

An additional measure to spur economic activity even without fresh asset purchases will be "to keep interest rates at historic lows at least through the summer of next year," Draghi has indicated.

The rest should fall into place, he argues, pointing to "the underlying domestic demand and wages [in the eurozone] continuing to support our confidence."