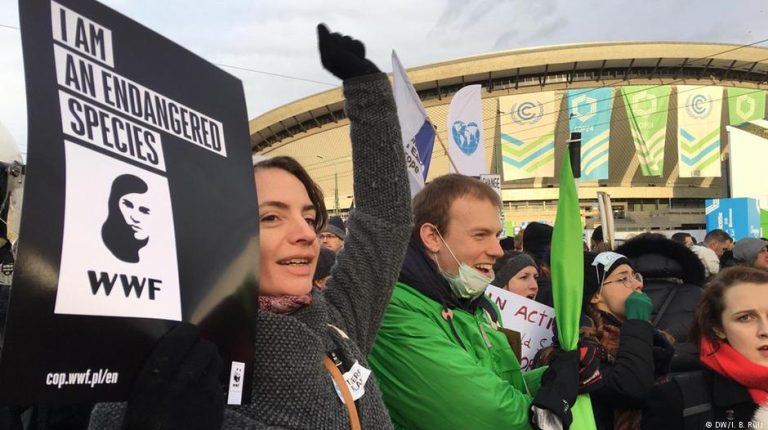 From activists risking their liberty to block coal, to US businesses sticking with the Paris accord regardless of Trump, ordinary folk fed up waiting for change have outshone the big political players at COP24.Averting catastrophic climate change is a task for the world. And the main players in the struggle break down into three groups: countries, businesses and citizens. So says Manuel Pulgar-Vidal, former Peruvian environment minister and head of WWF Climate and Energy.

As the climate talks in Poland draw to a close, many of us feel like we've heard quite enough from countries — or their governments: Lack of ambition, squabbles over finance, empty promises.

But businesses and citizens also hold key pieces to the COP24 puzzle. And more and more of them, all over the world, are standing up for our planet's future.

"People's lives are at stake," said Miray, one of the many Turkish activists risking their freedom to fight the expansion of coal-fired power plants, and who didn't want to give her real name.

That simple imperative is driving climate advocates in the United States, too, ever since President Donald Trump announced his plan to pull out of the Paris Agreement. Rather than giving up, ordinary people decided to take the lead.

The US We Are Still In coalition now has more than 3,500 members, including federal states, cities, Native American tribes, businesses, universities, cultural and faith groups, and health care organizations.

Governments need to take action. But while they dither over how, and how much, the people they represent are pushing ahead.

Turkey, yet to ratify the Paris Agreement, is busy building and expanding coal plants. Air pollution is already a big concern in the country. According to a report byClimate Action Network Europe, power plants in Muðla, in southwestern Turkey, cause 280 premature deaths per year.

"Hospitals are filled with asthma attacks during the winter months. This is what the doctors are saying, it's not made up," Miray told DW.

Meanwhile, activism in Turkey has become a crime, Miray says. Several of her friends are in prison. Yet people refuse to stay silent.

Miray describes a 65-year-old woman she knows back home, who said the olive groves an energy company want to buy from her and raze to make way for a coal mine were what enabled her to raise her children, send them to school and see them grown up and married. The woman refused to sell.

Ordinary people taking on the titans of the energy industry is something of a David and Goliath battle. But just as David brought down the giant, climate activists — like those who have brought a halt to the Hambach mine expansion in Germany — are winning victories and bringing hope.

Trump's out, but we're in

Three years ago, Trump announced his intention to withdraw the US from the Paris Agreement and much of the world was scandalized that such an important player would abandon the global effort.

Yet just three days later, over 1,000 US businesses, universities and local governments spoke together with a clear message.

In 2018 alone, the group generated hundreds of climate commitments. Businesses have pledged to meet science-based climate targets in line with the Paris Agreement, and over 100 US cities have committed to switching to 100 percent renewable energy.

With steps like these, the movement is confident it can achieve at least half what the US under former President Barack Obama pledged in 2015, and perhaps more than two thirds.

And the movement goes beyond the US.

The most recent UN Environment Emissions Gap Report shows that over 7,000 cities and 6,000 companies from around the world, as well as many other non-state actors, have pledged to mitigate climate change.

If they keep their promises in full, it would amount to a significant cut in global greenhouse gas emissions.

When we think about non-state actors and climate activism, we tend to picture protestors waving banners. But it's also about well-established businesses taking responsibility.

"The business sector plays a key role when we think about how to address climate change and its consequences," Pulgar-Vidal told DW.

Businesses are major polluters and hold the power to make drastic change. And because consumers are increasingly climate-aware, they have an interest in doing so.

"I am sure that the business sector will continue improving its behavior, because it is about climate, but it is also about their survival," Pulgar-Vidal said.

We Are Still In includes companies as important as Walmart, the world's largest retailer, and McDonalds.

And then there is We Mean Business, a coalition that includes more than 800 companies and has also been very present at COP24.

IKEA Group, one of the conference's sponsors, has promised to become a fully circular business by 2030, and switch to 100 percent renewable electricity.

The German Deutsche Post DHL Group, the world's leading mail company, has committed to accelerating the transition to electric vehicles.

So, yes, while governments have struggled to agree at COP24, there has been much at the conference to feel hopeful about.

The lurking fear overshadowing the last two weeks in Katowice that other countries following the US in ditching the Paris Agreement, has not materialized. Instead, Leonard says, the We Are Still In model has inspired similar initiatives in countries such as Japan, Argentina or Mexico. "This is very encouraging," he adds brightly.