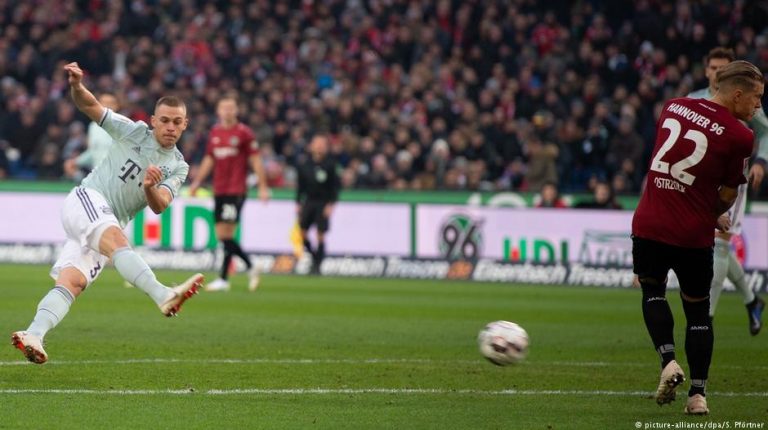 Joshua Kimmich set the ball rolling for Bayern after 62 seconds, when he drilled in a low shot from the edge of the box after Hannover failed to clear. That was the fastest Bundesliga goal since 2012, when Mario Gomez netted after 24 seconds.

The hosts were guilty of ball watching again when David Alaba punished them in ruthless style, powering in a thunderous drive from 25 meters to put Bayern in complete control.

The lively Serge Gnabry tucked in at the second attempt to make it three early in the second half and Kimmich picked up another assist, this time for Robert Lewandowski, who nodded in to make it four.

Bayern haven't lost since defeat in Der Klassiker in early November and quietly continue to apply the pressure on leaders Borussia Dortmund.

FT Hannover 0-4 Bayern Munich — All over in Hannover but it was over before it started. Goals from Kimmich, Alaba, Gnabry and Lewandowski keep Bayern's good run going. In emphatic fashion.

90' A few more minutes to go until Hannover are put out of their misery.

85' Huge chance to make it five but Lewandowski somehow misses from five meters out. Not sure how he missed that one, but this game has long been decided so it doesn't really matter. The Pole looks at his studs.

80' Both sides stepping back a little now. Hannover taking their medicine and Bayern content with three points and a big win on the road.

75' Bayern 15 minutes away from a win that will close the gap on Dortmund to six points, at least for a couple of hours.

70' Bayern in cruise control now but they aren't settling for four. Pushing hard for a fifth against a Hannover side who look broken.

62' GOAL! Hannover 0-4 Bayern Munich — It's four, and Lewandowski gets himself a goal. Kimmich the provider again, lifting up a cross from the right and the Pole nodding in from close range.

60' Another chance for Müller, but this time Coman's cross from the left has a little too much on it and Müller has a tough task to redirect it at goal, eventually seeing it bounce wide.

57' Has been quite a quiet game for Müller so far on his 300th Bundesliga appearance.

56' Müller almost gets on the scoresheet, glancing a corner towards goal. This time Esser gets a palm on the ball and yells at his defense for giving Müller space in the box.

50' A fair old stoppage there as Kimmich is treated. Didn't look too nice for the German, but he's been patched up and we're back under way.

46' We're back underway in Hannover.

HT Hannover 0-2 Bayern Munich — Bayern cruising here in Hannover. Kimmich gave them the perfect start after two minutes and Alaba's screamer doubled the advantage. A long way back for the hosts.

43' Almost a third for Bayern as a slip up at the back lets in Lewandowski, but he delays his shot and eventually it's blocked. That was the chance to put the game to bed before half time.

40' Almost the entire game is being played in Hannover's half of the field. They look like they can't wait for half time. Bayern, meanwhile, are buoyant and pressing for a third.

34' Bayern absolutely bossing this game, and Niko Kovac can be very satisfied with what he's seen so far. Game control and chance creation. Bayern are back in form, dare we say it?

29' GOAL! Hannover 0-2 Bayern Munich — Alaba thunderbolt! Bayern double their lead and it's a Christmas cracker from David Alaba! A corner is half cleared to the Austrian, who takes it on the run and absolutely thumps it in from outside the box on the half volley. Michael Esser got his fingertips to it, but no more than that.

28' Gnabry just keeps the ball in and cuts it back towards Lewandowski, but it's just behind the striker. Bayern looking dangerous every time they go forward.

26' An early cross from the right almost picks out Matthias Ostrzolek but the Pole can't quite get his head on it. Hannover showing some signs of intent though.

25' A rare foray forward for Hannover down the left, but Hummels comes across to sweep it up. Bayern comfortable out there.

23' Bayern's attacks are relentless. Goretzka, regularly the driving force behind their attacks, drills a shot just over the bar.

17' Some intricate play on the edge of the Hannover box by Bayern ends with Lewandowski going down clutching his shin. He's adamant that he's been fouled but nothing is given.

10' Bayern looking a lot more positive on the ball than we've seen from them in recent games. Their more direct approach is causing the hosts all kinds of problems.

5' Hannover looking for a quick response but Bayern looking pretty comfortable in the early stages.

2' GOAL! Hannover 0-1 Bayern Munich. Kimmich scores! That was quick! The ball comes out to Kimmich on the edge of the box and his low volley sneaks inside the far post. Fast start by Bayern.

1' KICK OFF! We're underway in Hannover!

– Teams are out! Kinsgley Coman returns for Bayern, which is no surprise after his thrilling cameo in midweek. Otherwise, Thiago is in midfield with Joshua Kimmich dropping back to his usual right back spot.

Hannover are struggling. They have four points from their last five games and haven't beaten Bayern since 2011. Looks likely that Andre Breitenreiter needs to finish the first half of the season strongly if he's to keep his seat over the break.

– Good afternoon! If Bayern's midweek thriller against Ajax is anything to go by, then this afternoon's away game against Hannover could well be much more exciting than first appears. Bayern are currently in third in the table, nine points behind league-leaders Borussia Dortmund. With only three games left before the winter break, Niko Kovac knows there is work to do over the festive period.