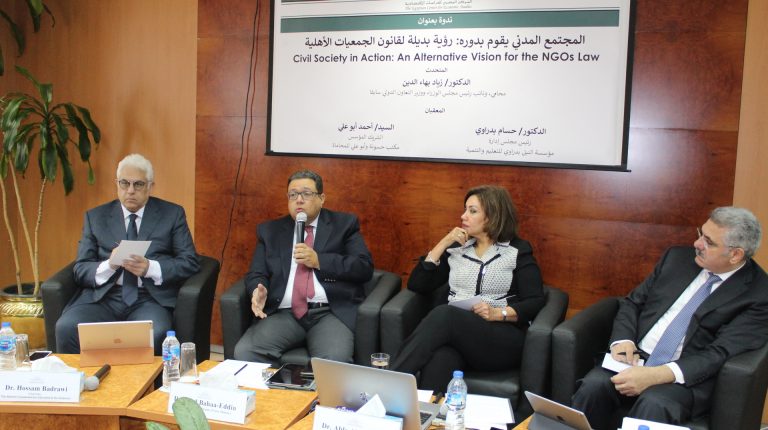 Egypt’s former deputy prime minister, Ziad Bahaa-Eldin, said that he felt happy with participating in discussions about the NGOs Law because it was issued abruptly. This came during a symposium held at the Egyptian Centre for Economic Studies (ECES) entitled “Alternative Vision for the NGOs Law”.

Bahaa-Eldin added that the civil society has been demanding the amendment of the law during the past one and a half years without receiving any response or comment from the concerned authorities. The current form of the law has deprived lots of people from benefiting from the services of NGOs over the past two years. He said it is important now to address the law because it has caused panic between workers in the sector.

During the symposium, he presented a new suggestion that includes several principles for the amendment of the law. The amendment, he believes, must come with a change in the prevailing thinking in the state bodies that NGOs are only a source of disturbance and foreign interference.

He stressed that a new version of the law must actively bring back the work of civil bodies and their establishment according to the Constitution,

allowing them to collect financing resources and donations controlled by regulations that maintain a state of balance. They must be allowed to practice their licensed work without needing permits for every step they take. Confidence must be brought back to people to make them believe NGOs are charity volunteer work that should not result in those who practice it getting into trouble or facing humiliation.

Bahaa-Eldin concluded his speech by saying that it is important to look at what the civil society can do after the government has announced forming a committee to manage the community dialogue over the law. He added that the aim was to come out with an unprecedented law in terms of philosophy and vision. Those who are interested must not wait for the government to decide and only react to its decisions, they must be involved and ready to suggest and coordinate with the government. Silence and waiting for the results may lead to a damage that cannot be reversed, and wasting a chance to correct a major legislative mistake.

Political thinker Hossam Badrawy said, during the symposium, that he agrees with Bahaa-Eldin and noted that there are so many benefits in the Constitution that have not been used so far. They include NGOs and municipalities.

Badrawy said that members of the parliament are responsible for the delay of obtaining these benefits.

He added that the philosophy of the NGOs Law must make it clear that the system of development will never be completed without NGOs. Civil work has saved Egypt throughout the last seven years. He demanded drawing a clear line between monitoring and controlling the changes of the law. Monitoring is required, but control is not.

On the other hand, Ahmed Abu Ali, the board of directors member at ECES, stressed the importance of resorting to Article 75 in the Constitution which regulate the civil work.

The symposium was administered by Abla Abdel-latif, the executive director and research head at the centre. She mentioned, following the speeches of the guests, the points of agreement between the speakers, which stressed that the planned amendment of regulations are very important because they could rip any new regulations of their meanings and continue to cause an obstruction in the path of civil work.