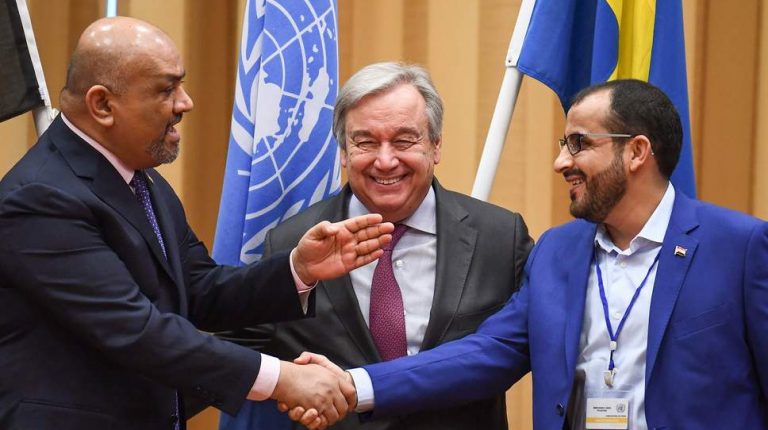 Egypt welcomed the agreements reached between the Yemeni rivals, concluding the political discussions which took place in Sweden during the past week. The meetings addressed the situation in Al-Hudaydah and Taiz cities, as well as prisoners exchange.

After a week of peace talks, the internationally recognised government of Yemen and the Ansar Allah (Houthi) group agreed in Rimbo, Sweden to withdraw their forces from the port city of Al-Hudaydah and to implement a ceasefire in the governorate.

In a statement on Friday, Egypt’s ministry of foreign affairs described the outcome of the Sweden meetings, as a major and important step for reaching a political solution for the crisis in Yemen, in accordance with UN’s resolution 2216, and the other related international references.

The statement also stressed on the importance of the Yemeni parties’ commitment to the agreement in order to alleviate the suffering of the Yemeni people.

The conflict in Yemen erupted in September 2014, when the Iran-backed Houthi group seized control of the Yemeni capital Sanaa. In response, Saudi Arabia, the neighbouring regional power, announced the formation of the Coalition for Supporting Legitimacy in Yemen in March 2015.

Besides Saudi Arabia, the coalition includes the UAE, Jordan, Bahrain, Pakistan, Djibouti, Sudan, Senegal, Kuwait, Morocco, Malaysia, and Egypt, as well as the internationally recognised government of Yemen. Qatar was part of the coalition until the outbreak of the Gulf crisis in May 2017.

On Friday, the UN Special Envoy for Yemen, Martin Griffiths, said that there is an urgent need for a strong system to monitor the ceasefire. He addressed the UN Security Council stating that a monitoring system is urgently needed.

“I think it is the first big step forward,” commented Griffiths on the agreement. He expressed his hope that the ceasefire in Al-Hudaydah could guarantee that the humanitarian situation in Yemen get better after the UN described it as “the worst famine in the world in 100 years.”

The civil war in Yemen resulted in the death of over 100,000 civilians, and the injury of hundreds of thousands. The UN and other international organisations repeatedly warned that about 13 million people in Yemen could face starvation, amid the ongoing war without allowing humanitarian aid.