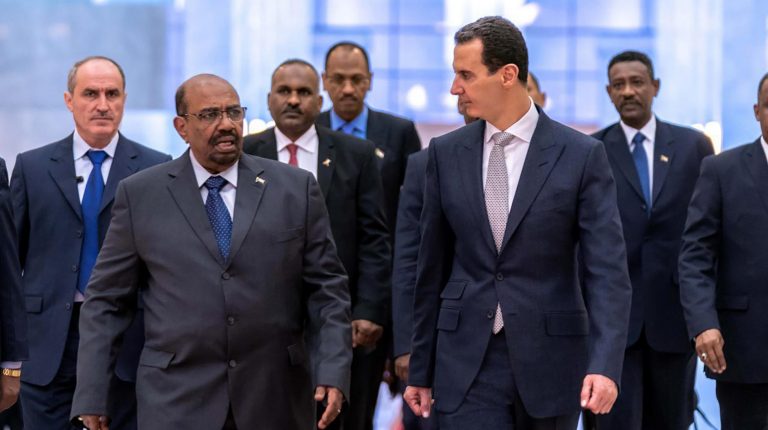 The Sudanese President Omar Al-Bashir visited on Sunday the Syrian capital Damascus, and met with his Syrian counterpart Bashar Al-Assad. The visit is the first of its kind since the outbreak of the Syrian uprising in 2011.

According to the Syrian state news agency SANA, the two presidents discussed the latest updates in the region and in Syria. Al-Assad said during the meeting that Syria is secured by the Arabs and sticking to Arabism. He also praised Al-Bashir’s visit, saying that it is a strong push for reactivating the relations between Syria and Sudan.

In November 2011, the Arab League suspended all activities and relations between the League and Syria, after the violent response of the Syrian government to the mass demonstrations against Al-Assad’s rule.

The two presidents stressed that the current situation in several Arab countries requires reaching new approaches for the countries’ mutual work. These approaches should depend on respecting each country’s sovereignty, and not interfering in its internal affairs, in order to enhance the Arabic relations.

Most of the Arab countries closed its embassies in Syria or decreased their relations with Damascus, after the Syrian uprising and the accusation against the Syrian regime of using chemical weapons against civilians. But recently, several calls for normalising relations with Al-Assad’s regime emerged.

Al-Bashir, who is internationally isolated as he is wanted by the International Court of Justice, said that Syria is in the front of countering Israel. He stressed on his country’s keenness to achieve Syria’s stability, security, and unity under its legitimate leadership.