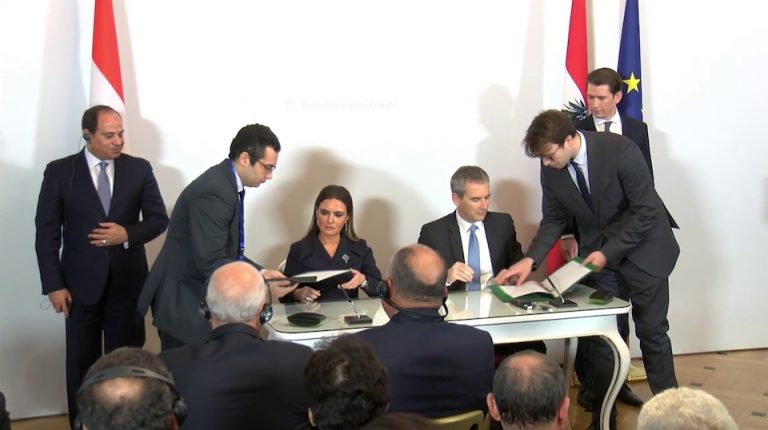 President Abdel Fattah Al-Sisi and the Chancellor of Austria, Sebastian Kurz, witnessed the signing of a number of memorandums of understanding between the two countries on Monday in Vienna.

The meeting of the two leaders addressed bilateral relations, the situation in the Middle East, as well as different international and regional issues of mutual concern.

Al-Sisi has arrived in Vienna on Sunday in a four-day official visit to take part in the high-level Africa-Europe Forum. Kurz is the current president of the Council of the European Union.

During a joint press conference with Kurz, Al-Sisi stressed Egypt’s moral and humanitarian commitment towards the illegal immigrants and refugees issues. He pointed out that Egypt hosts about 5 million refugees and never took advantage of them to earn privileges from any country. He noted that Egypt did not allow the refugees to go to Europe.

Representatives from the Egyptian and Austrian sides signed several agreements at the Federal Chancellery in Vienna.

The Minister of Investment and International Cooperation, Sahar Nasr, signed the first MoU for cooperation in entrepreneurship and small businesses with the Austrian Minister of Finance, Hartwig Loeger. Additionally, the two ministers signed another MoU in the field of developing free zones.

Egypt’s Minister of Higher Education and Scientific Research, Khaled Abdel Ghaffar, and his Austrian counterpart signed MoU for boosting cooperation between the two countries in the field of scientific research.

In a previous phone call with Al-Sisi, Kurz praised Egypt’s achievements in countering terrorism and restoring security and stability, in addition to its efforts for countering illegal immigration to Europe, asserting that his country, being the current president of the EU, considers Egypt as a pivotal partner in the process of keeping stability and security in the Middle East.