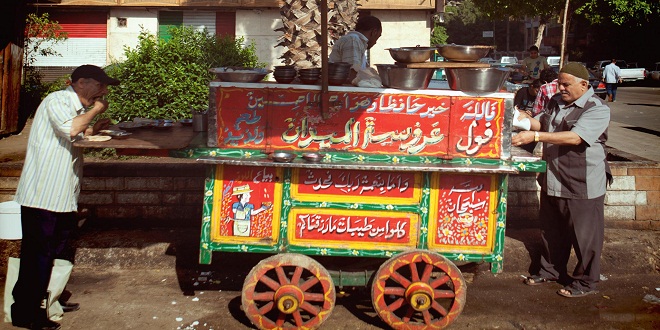 While President Abdel Fattah Al-Sisi was demanding the citizens to be healthier and improve their eating habits, Egyptians were already complaining about food prices hike.

In two different occasions in November, Al-Sisi called for increasing awareness of the public about the danger of obesity, especially among school students and youth.

The screening of 17 million Egyptians as part of the campaign’s first phase showed that 75% of Egyptians have an above normal weight.

Al-Sisi noted that about 11 million of the targeted Egyptian citizens in the screening suffer from different diseases, most commonly diabetes, blood pressure problems, hepatitis C, and obesity, asking “why do we do this to ourselves?”

He added that the citizens should be educated about the effect of their weight on their health, as it paves the way to several diseases.

The president’s remarks came during the inauguration of a number of national projects, in the presence of Prime Minister Moustfa Madboly and a number of state officials.

“We have 700,000 people detected positive with hepatitis C and 11 million with no-communicable diseases, out of a total of 17 million. About 25% of those have normal weight while the rest have above normal weight or suffer from obesity, which will turn into life-threatening diseases.”

The president continued “every citizen needs to ask himself and look at his stomach, and then he will know how the problem is big.”

Earlier in November, Al-Sisi expressed concerns about the overweight of young Egyptians during a session at the World Youth Forum in Sharm El-Sheikh, urging his government and society to establish “a culture of self-care”, while asserting that sports should be the main subject in school and university curriculums.

It may be the first time that the Egyptian state sheds the light on obesity rates and the necessity of fighting the nation’s high rates of related-diseases.

Reactions to the president’s statements varied. Some supported him and called on the people to respond positively to this call to decrease rates of obesity in Egypt, while others criticised the issue, saying that they cannot even afford normal amounts of food.

The flotation of Egyptian pound in November 2016 increased the prices of all products, including food, medicine, electronics, and fuel, as well as services, making life harder for the citizens.

Since the flotation, the majority of Egyptians has been complaining about how the monthly budget for commodities became insufficient to secure all their needs.

Starchy food is common among Egyptians, as they mainly rely on traditional high-calorie meals. Beans, falafel, and koushary are among the most common dishes for Egyptians. Rice and pasta are always served in everyday meals.

The traditional food in Egypt relies on products that include high calories, which made healthy food more expensive for being less demanded.

According to statistics from the World Health Organization (WHO), about 80% of Egyptians dies due to non-communicable diseases such as obesity, diabetes, hypertension, and heart disease. About 15% of pre-school age Egyptian children are overweight, while 37% of women infertility (aged from 15 to 49) are overweight, and 48% of females are suffering obesity.

“My mother uses butter in cooking, so how can I lose weight?”

Rodiana Ahmed, a business administration student, said that her mother uses butter in cooking as her family could not accept the idea of cooking with olive oil because this was never part of their culture.

Ahmed said that her weight is over 90kg and that she has been trying to lose weight for the past three years, so she decided to adopt her own lifestyle away from her family’s eating habits.

“I am spending EGP 2,500 monthly in the sake of losing weight and being a healthy person, and this adds a burden on my shoulder,” said Ahmed, who also works as a makeup assistant artist.

Ahmed’s parents are paying for her education, but giving her little money for her daily expenses, which covers only transportation and tutoring expenses, so she decided to work a nightshift job to cover her personal needs.

“I visit the gourmet market every month to buy healthy products which usually cost around EGP 800 to 1,000. I cook them myself to follow a diet prescribed by my doctor,” she said, adding that she pays a total EGP 500 per month as doctor’s fees.

Ahmed added “I really believe that to maintain a routine of healthy food is very difficult and requires a lot of money. Sometimes when I am not able to cook, I buy healthy food from a specialised restaurant. Salads only can cost around EGP 60 or 70, and sometimes EGP100. When I do not have enough money for such expensive food, I tend to grilled-food, which usually costs around EGP 50 per meal.”

Ahmed’s story showed that the problem does not lie in the high prices of healthy food only, but that eating starchy food is part of the Egyptian culture.

Farah Sherif, 26, food blogger, urged that she really believes that the problem is not about healthy food or traditional food, but the high prices of different products. People tend to fast food which is cheap and available everywhere compared to healthy food.

“I cannot deny that anything healthy and clean is expensive in Egypt. As healthy food is better than fast food, it is really very expensive. We have some markets specialised for selling healthy food in Egypt, such as Gourmet and Fresh Food Market, whose prices are not affordable for many of citizens. Such markets are all well known for high-class people as they are the only citizens who can afford their food,” Sherif said.

Egyptians need a full re-arrangement for their lifestyles, I think we need to launch a nationwide awareness campaign on how they can choose healthy food with low budgets and provide them with plans to be healthier and play sports.

She further recommended that the state should realise the importance of nutritionists as they are really doing great jobs and can be the ones who tell people how to be healthy with low budgets.

Parliament will take a stance

Mohamed Al-Amari, head of the health committee in parliament, said in a press statement that combating obesity is on its agenda in the coming period. The committee will examine the possible mechanisms to address this phenomenon and its impact on human health.

DW’s Health News: Why do we crave chips?