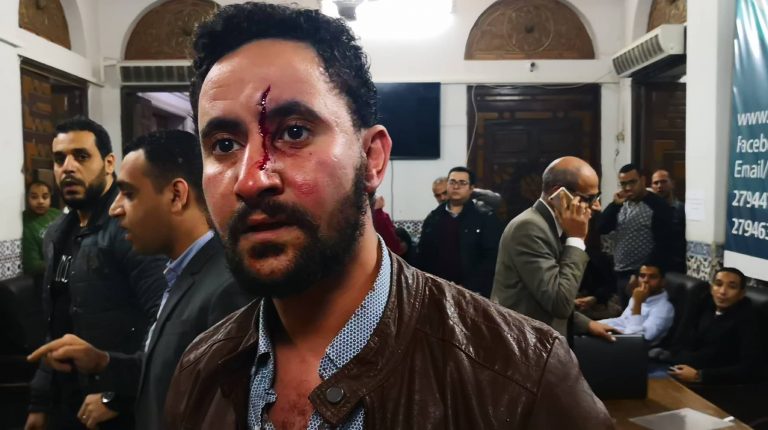 Cairo prosecution carried out an investigation into the assault of four journalists who were covering the elections of the Pharmacists Syndicate on Monday.

One of the security guards suspected of the assault was arrested after the four journalists recognised him.

“We were doing our job. They assaulted, cursed and insulted us. They did so on the instruction of the head of the Pharmacists’ syndicate Mohieddin Obeid. He ordered them on the phone to ‘prevent all this interviewing process’,” Mohamed Shoukry, one of the victims of the assault, told Daily News Egypt on Tuesday.

Shoukry narrated that the guards attacked them after they began interviewing Karam Kordy, one of the candidates running for the syndicate’s presidency.

“We were covering the elections and of course interviewing the candidates. We are not part of any competition or conflict. If they (the current head and council) do not want him to be featured in media, then they could prevent him, not assault us,” Shoukry said.

Shoukry added that a security guard hit him with the camera on his face, leading to a severe wound on his forehead,” further saying, “They demolished our cell phones and my camera, worth EGP 34,000”

He said, “Fayez Shatta, the managing director of the syndicate, insulted us and took the phone of our female colleagues, and smashed it under his foot in front of us.”

Shoukry added that the two female journalists were insulted and cursed by female employees in the syndicate. “They detained us in the second floor for almost an hour.”

A senior journalist at Al-Masry Al-Youm told DNE that once they learned about the assault, a group of the newspaper’s journalists rushed to the syndicate for their colleagues, but also got detained in the syndicate. “They detained us too for two hours,” the source said.

The source, who spoke on condition of anonymity, said that the four journalists filed a lawsuit against Obeid, accusing him of the incitement against them and Shatta, whom the source said, “was leading the assault against the journalists.”

In a statement on Monday, the Press Syndicate condemned the assault against the journalists, describing it as “a crime and an aggressive act, resulting in injuries on the journalists’ faces.”

The Press Syndicate also denounced the “detaining of 15 journalists” inside the Pharmacists Syndicate , as well as destroying their cameras, and stealing their cell phones.

The Press Syndicate asserted that it will file a lawsuit against Obeid and his council, as well as all those responsible for the assault.

Mauricio Santoro: 'Freedom of the press is a precious gift'