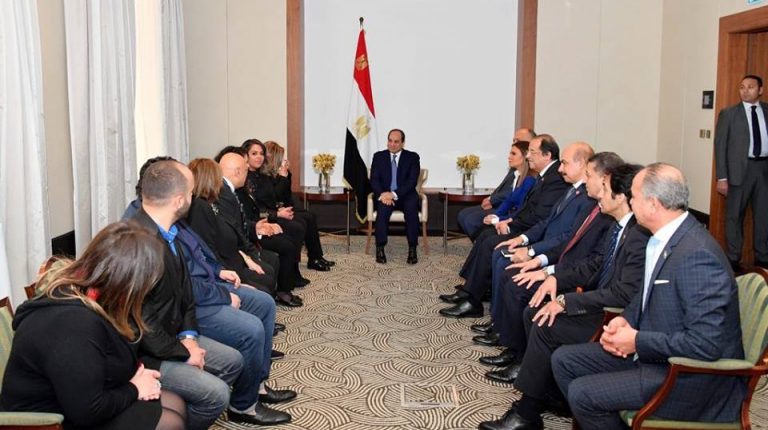 Al-Sisi met Slovenian Prime Minister Marjan Šarec during his trip to Austria. Al-Sisi congratulated Šarec on the latest parliamentary elections which took place in Slovenia. Both state officials discussed the bilateral relations between the two countries, in the different fields of economy, trade, tourism, as well as the political relations.

Šarec, according to the Egyptian presidency, asserted his country’s keenness to boost its relations with Egypt, “for its role as a cornerstone for stability, and its role in sustaining the stability and peace in the Middle East.”

The meeting also discussed mutual topics in the fields of defense, security, counter terrorism, and organised crimes. Al-Sisi also discussed Egypt’s efforts to attract foreign investments and to increase the number of mega development projects, and the steps the government is taking to support the private sector. The president briefed Šarec on the newly inaugurated Suez Canal, and the soon to be inaugurated, the New Administrative Capital.

President Al-Sisi also met with the Maltese Prime Minister Joseph Muscat. The Egyptian presidency said that the two sides asserted the historical relations that connects the two countries in the fields of development and tourism. The meeting also discussed the possibility of increasing cooperation with Maltese tourism companies, in order to enhance the tourism industry in Egypt.

Muscat said, according to the Egyptian presidency, that his country appreciates Egypt’s role in countering terrorism and radical Islamist ideologies, as well as illegal immigration. Both leaders addressed the issue of illegal immigration, as Egypt and Malta are destinations for immigrants. Both agreed to solve the problem not only from the security aspect, but to also tackle it from the economic and social aspects.

The meeting also discussed Egypt’s leadership of the African Union (AU) which will start in February 2019. The two officials also discussed the Libyan crisis, while President Al-Sisi briefed Muscat on Egypt’s efforts to moderate between the conflicting sides in Libya.

Al-Sisi also met with the Chief Executive Officer of the World Bank (WB) Kristalina Georgieva. According to the presidency’s spokesperson Bassam Rady, the meeting aimed to promote the cooperation with the WB as it is “a partner in the sustainable development process in Egypt.”

Georgieva stressed that the WB is keen to develop “the consultation and coordination frameworks with Egypt to continue supporting the country’s economic reforms.”

On Tuesday, President Al-Sisi attended the Africa–Europe Forum which took place with the attendance of leaders from the two continental blocs, the AU and the EU.

The forum focused on the digital cooperation between the two blocs. Over 1,000 participants attended a parallel business-to-business event, including about 100 African start-ups.

On Monday, Al-Sisi and Kurz witnessed the signing of a number of memorandums of understanding between the two countries in different fields, including entrepreneurship, education, research, and transportation.