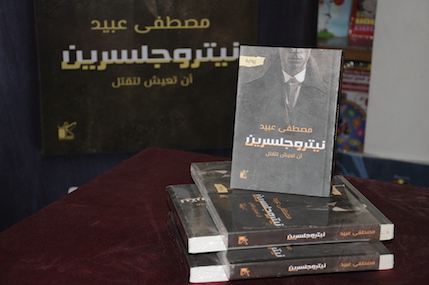 Decades later, people are still curious about the details of the secret political movement held at the early 1930s, with the aim of fighting British Occupation. Hundreds of movies and novels were written to highlight Egypt’s national activists who lost their lives for the sake of regaining Egypt’s freedom. However, in his latest novels, writer Mustafa Obeid showed another aspect of the political movement, that few people knew about before. A side that he discussed in his book’s signing earlier this week.

The signing took place at Maadi’s Alef bookstore, with Obeid taking the attendees back in time and place to the previous era, where he discussed the killings of a terrorist, whom is portrayed in the Egyptian history as an alleged national hero who assassinated several politicians.

Obeid discussed the novel, touching the readers’ eyes, hearts, and minds, and making them reconsider the details they believed to be impeccable facts for their whole lives.

Through taking the readers deeply into the details of a secret movement which was held in Egypt in the 1930’s and 1940’s, the writer presented the character of Hussein Tawfik, who killed Amin Pasha in 1946.

a Man in Our House), based on a novel of the prominent late legend Ehsan Abdel Kodous. The film tells the story of a political activist who hides in one of his acquaintances’ home, only to fall in love with his younger sister. Through the film’s plot, the audience gets attached to the decent young man who could lose his life, and the story of the girl he fell in love with at first sight, as well as his dream of seeing his homeland free from British colonisation.

In the book signing, Obeid stated that he was driven by the terrorism surrounding our world today to dig deep inside its origins, in order to understand how easy it sounds for terrorists to kill others “under a fake claim of heroism”. He added that the character of Tawfik was quite challenging to draw, as it was full of contradictions.

Although facing three death sentences, the man escaped, and the story reveals the unknown side of the man once believed to be an Egyptian hero.

It also reveals the main events of his life since his childhood in Maadi to the transformation of his personality and the beliefs he harboured during his military service, and how he was used to killing the enemies of King Farouk. It also narrates the rise of the terrorist and his assassination of important Arab politicians in Egypt and Syria.

Mahmoud Abaza, the former head of Al-Wafd party, stated during the book signing that he met some of the characters featured in the story in his real life, asserting that from what he saw, their acts were indeed terroristic ones, and not as heroic as they were later featured in media and films.

Abaza stated that he was hugely surprised knowing Tawfik, a person with no financial, social, or cultural reasons to murder. He further added that he was also surprised with Obeid’s portrayal for the character.

“He brought back to life a person who was dead and forgotten by several historians,” Abaza said.

From her side, Egyptian journalist Suzanne Herfy, who was moderating the discussion, stated that the novel succeeded in drawing the thin line between national activism and terrorism, yet it better showed how political activism can turn into terrorism.

She also praised the way Obeid portrayed the Egyptian-Syrian political scene in the period the novel was running through.

The novel is the writer’s fourth political one, published by Kayan Publishing House.