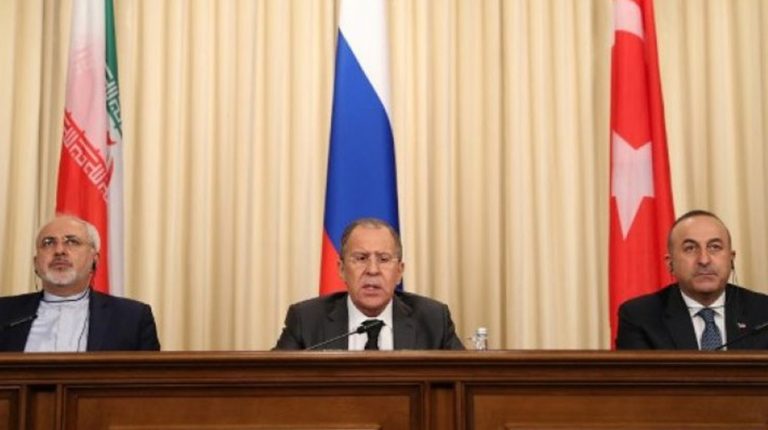 Turkey, Iran, and Russia, the supporters of the main parties involved in the Syrian civil war, failed on Tuesday to agree on the UN’s proposed Syrian constitutional committee. The three regional powers called for a meeting for the committee early in the coming year to launch a viable peace process.

Following a meeting which gathered the foreign ministers from the three countries with the UN Special Envoy for Syria Staffan De Mistura in Geneva, where they issued a joint statement read out by the Russian Foreign Minister Sergey Lavrov.

According to the statement, the three countries stressed that the new initiative should be guided by a sense of compromise as well as constructive engagement. The UN-sponsored committee is an initial step for holding elections in Syria and obtaining the UN’s support for the process and outcomes of the elections.

The statement made no comment about the formation of the committee, pointing out that the three parties are still disagreeing on the candidates for the committee.

The Syrian government and the moderate armed opposition have each submitted a list of 50 names to join the committee, but the three supporters Russia, Iran, and Turkey did not agree on the other 50 names from civil society and independent backgrounds. The number of members of the committee should be 150 members.

De Mistura who will be replaced as the UN’s envoy on January 7 said, “I believe there is an extra mile to go in the marathon effort to ensure the necessary package for a credible, balanced, and inclusive constitutional committee, and for including a balanced chairing arrangement and a drafting body and voting threshold, to be established under the UN auspices in Geneva.”

The civil war in Syria caused the killing of thousands of people since the beginning of the uprising in 2011 against the regime of Bashar Al-Assad, who brought forces from Iran and Russia in addition to the Lebanese Hezbollah militia, to support him against rebels. Hundreds of Jihadists moved to Syria since 2011 to take part in the war against Al-Assad and his allies.