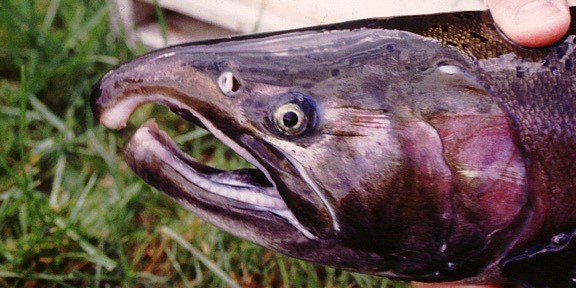 For salmon, the ability to smell is critical. They depend on their olfactory sense to avoid predators, to sniff out prey, then find their way home by the end of their life span, as they return to the streams where they hatched to spawn and die.

A new research from the University of Washington, and the Northwest Fisheries Science Centre (NOAA Fisheries) shows that this powerful sense of smell might be negatively affected, as carbon emissions continue to be absorbed by our ocean. Ocean acidification is changing the waters’ chemistry and lowering the pH level. Specifically, higher levels of carbon dioxide in the water can affect the ways in which coho salmon responds to smells.

“Salmon are known for utilising their sense of smell for essential activities, from navigation and finding food, to detecting predators and reproducing. Therefore it was important for us to know if salmon could be impacted by future carbon dioxide conditions in the marine environment,” said lead author Chase Williams, a postdoctoral researcher in Evan Gallagher’s lab at the UW’s Department of Environmental and Occupational Health Sciences.

The study, published online on 18 December in the Global Change Biology journal, is the first to show that ocean acidification affects coho salmons’ sense of smell. The study also takes a more comprehensive approach than earlier work on marine fish, by looking at where in the sensory-neural system, the ability to smell erodes for fish, and how that loss of smell affects their behaviour.

“Our studies and research on other groups have shown that exposure to pollutants can also interfere with salmon’s sense of smell,” said Gallagher, senior co-author and a UW professor of toxicology. He added, “Now, salmon is potentially facing a one-two punch from exposure to pollutants and the added burden of rising CO2. These have implications for the long-term survival of our salmon.”

The research team wanted to test how juvenile coho salmon, that normally depend on their sense of smell which alerts them to predators and other dangers, would react to a possible danger, this time with increasing carbon dioxide. The Puget Sound’s waters are expected to absorb more CO2 as atmospheric carbon dioxide increases, contributing to ocean acidification.

After two weeks, the team ran a series of behavioural and neural tests to see whether the fishes’ sense of smell was affected. Fish were placed in a holding tank and exposed to the smell of salmon’s skin extract, which indicates a predator attack and usually prompts fish to hide or swim away. The findings came to show that fish in the water with the current CO2 levels, responded normally to the offending odour, but the fish in tanks with higher CO2 levels didn’t seem to mind or even detect the smell.

After behavioural tests were carried out, neural activity in each fish’s nose and brain—specifically in the olfactory bulb where information about smells is processed—was measured to see where the sense of smell was altered. Neuron signalling in the nose was normal under all the CO2 conditions, meaning that the fish could still likely smell the odours. But when the researchers analysed neuron behaviour in the olfactory bulb, they saw that processing was altered, suggesting that the fish couldn’t translate the smell into an appropriate behavioural response.

Finally, the researchers analysed the tissue in the noses and olfactory bulbs of fish to see if gene expression also changed. Gene expression’s pathways were found to be altered for fish that were exposed to higher levels of CO2, particularly in their olfactory bulbs.

“Inside the nose, we think that the neurons are still detecting odours, but when the signals are processed in the brain, that’s where the messages are potentially getting altered,” Williams said.

In the wild, fish would likely become more and more indifferent to scents that signify a predator, Williams added, either by taking longer times to react to the smell, or by not swimming away at all. While this study looked specifically at how an altered sense of smell could affect fishes’ response to danger, it’s likely that other critical behaviours that depend on smell such as navigation, reproduction, and hunting for food would also be affected, if fish aren’t able to adequately process smells.

The researchers’ plan to look next at whether increased CO2 levels could affect other fish species in similar ways, or alter additional senses other than smell. Given the cultural and ecological significance of salmon, the researchers hope these findings will prompt action.

“We’re hoping this will alert people to some of the potential consequences of elevated carbon emissions,” said senior co-author Andy Dittman, a research biologist at the NOAA Fisheries, further adding, “Salmon is so iconic in this area. Ocean acidification and climate change are abstract things, until you start talking about an animal that means a lot to people.”