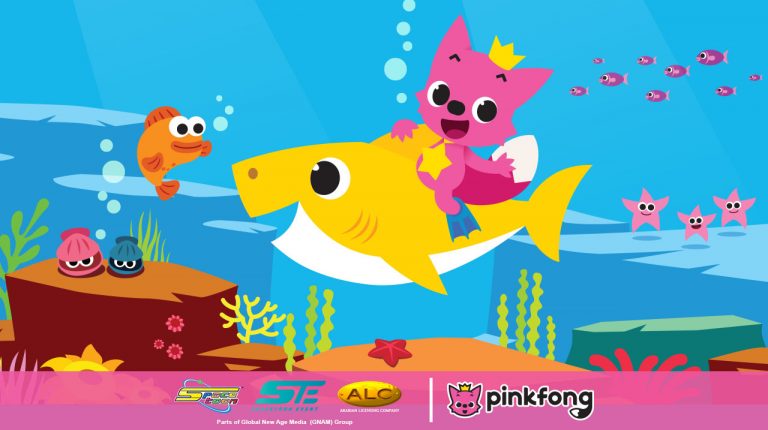 After causing a huge phenomenon with millions of children followers worldwide, Spacetoon Group, the Leading Company in the field of edutainment in the MENA, has recently announced its partnership with Pinkfong, the children’s educational brand of SmartStudy, a South Korean educational entertainment company, to bring Baby Shark to the Middle East.

Baby Shark is currently on of the most famous children’s songs worldwide, with more than 2 billion viewers on YouTube only. The song, by Pinkfong, was originally made for kids, but when the song plays, even adults can’t help but sing along and dance to the melody.

As one of children’s favourite TV channels with one of the highest views, Spacetoon is announcing its partnership with Pinkfong to bring this phenomenon to the MENA to double the fun, with other songs by Pinkfong on the way too.

Fayez Weiss Al-Sabbagh, president of the Spacetoon Group, said in a press release, “We’re very proud of partnering with SmartStudy. We can’t wait to see how our team will expand the popularity of the already successful Baby Shark song, but this time in Arabic.”

The Baby Shark song will be localised into Arabic by Spacetoon’s Kids T.V in cooperation with Pinkfong. This means that Arab children will be enjoying the song again in their own language and watching it on Spacetoon, and its digital media platforms. Moreover, other Pinkfong hits will be translated into Arabic too, such as Monkey Bananas, The Penguin Dance, and many more.

A contract was signed with ALC, who was announced to be the master licence holder of all the categories of Pinkfong and Baby Shark. The ALC team has great plans in store for its audience in order to get the best out of this licence.

The exclusive rights for the ticketed and non-ticketed activation of Baby Shark and Pinkfong are given to Spacetoon’s events. The preparations for upcoming live shows, workshops, and other entertaining events that hold the theme of Baby Shark have already started.

During more than 18 years, Spacetoon Group has gathered many brands with fans from different generations, across the Arab world.

The best thing to do is to follow the advice of Baby Shark’s song “Let’s go hunt”, and hunt the opportunity of joining the huge success that will be soon achieved through Pinkfong’s Baby Shark.