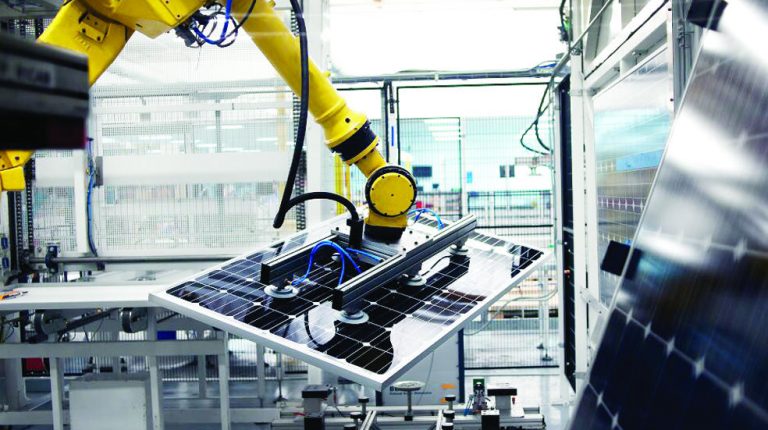 The German-Egyptian alliance, led by Fraunhofer, started conducting legal and administrative studies to establish a solar panel plant in Egypt.

Government sources told Daily News Egypt that the alliance completed the financial and marketing studies, leaving only the administrative and legal aspects. According to the studied conducted, 1,000 MW of solar cells will be sold in the Egyptian market in the first year, and Egypt will start exporting to the Arab and African countries within the second year.

The sources pointed out that the project aims to localise the production of solar panels, and optimise the use of natural resources in order to create jobs and cooperate with Arab and African countries in supplying a service with high efficiency.

The Kuwait Fund for Arab Economic Development is financing the feasibility study of setting up a solar panel production plant, with technical assistance of $680,000. The fund has begun disbursing payments to the German-Egyptian alliance, in order to undertake a comprehensive study.

The Egyptian Ministry of Military Production directly supervises the preparation of the study, through technical and financial committees established for this purpose.

The sources pointed out that there are ongoing negotiations with Chinese and German companies to implement and finance the project. An agreement is expected to be reached with one of the two companies before the end of March 2019, especially as the ministry started discussions with Chinese companies and has gone a long way in the negotiations.

According to the sources, the Chinese company offered to finance and implement the solar panel plant on the condition of the ministry buying the panels’ production of 1,000 MW, a condition that the ministry accepted.

The Egyptian ministry previously went through intensive negotiations with the Chinese group GCL, to establish the plant with production capacities between 2,000 and 5,000 MW annually, but required the ministry buying all the quantity produced, which stalled the negotiations.

According to the feasibility study and needs, it was agreed that the capacity of the plant will be 1,000 MW, with the possibility of increasing production or capacity in the following stages.

Filipinos want to boost green energy — but where will they get the cash?