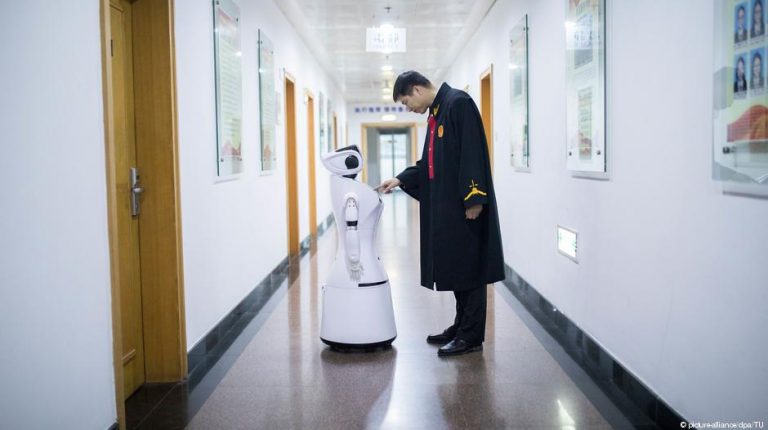 And this has a lot do with smart speakers, devices that run AI speech assistants .

In the run up to Christmas, you may have seen adverts for Amazon's echo dot.

But it's a very clear message: here's a smart speaker and this is how you talk to it.

It's advertising, and a whole lot more.

We're being schooled to think and behave in a way that will make life easier for computers. Forget fuzzy logic. AI is all binary. There's no room for "ums" and "ahs," or taking your time, just simple, clear commands.

So in future, try to think of these ads as subliminal instructions: While we wait for the lights to change, we're being reprogrammed, schooled in the Tao of AI.

We're also being nudged — to use that marketing coinage — to adjust our expectations.

Whether you're an Amazon fan, or prefer Google, Apple, Samsung, Baidu, Microsoft or DingDong (love that name), these littles devices are preparing us for an endgame few of us can envisage.

Bad for humans, great for machines.

Back in November, the German government published its strategy paper on artificial intelligence. Its number-one goal was to make "AI made in Germany" an international brand in 2019.

It seems laughable, coming from a country that prizes itself as a citadel of innovation. It's as if it's only just woken up to artificial intelligence, while the UK, my country of birth, and one too stupid to stay in the EU, came out with its strategy almost two years ago — Brexit nerves, no doubt.

Few people in government, however, seem to truly understand AI or machine learning. The one thing politicians do get is that it's easier digested in soundbites about "connectivity," "smart" things and "STEM."

The rest of us wallow in wanton ignorance, a self-satisfied, influencer obsessed, life of digital entitlement. I want… this and that random thing. We command Alexa to "play workout music" rather than specific tracks or bands.

And why should we care about the devil in AI when a Google Glass can tell us where to buy those purple sneakers we saw some stranger wear in the streets?

Hell, Google's probably got the technology to superimpose whatever sneakers their algorithm spits out into our "personalized" fields of vision — who knows whether the person we thought we saw was real or a hologram, but we'll take them for real, as we won't really be looking intently, and then buy those sneakers because the recommendations are PERSONAL, for our eyes only.

A life after AI?

We used to want the world at our fingertips — including the lights — but now we can't even be bothered to flick a switch. So we call on a speech assistant. But soon we may even be too lazy to do that.

Scientists at the University of Warwick are turning to a field of synthetic biology. They want to use genes from fireflies to create "self-lighting" Christmas tress. Fireflies can make their bodies light up through a chemical reaction called bioluminescence.

The scientists will take that to make a synthetic DNA, splice it with the trees, and let nature's "body clock" do the rest. The trees will light up automatically when it's dark. Or so is the plan. Just think: You won't even have to open your mouth.

There's a good chance we'll see more AI in cars — not just in terms of automation and self-driving vehicles, but also in terms of those speech assistants. A big part of the game is getting average folk like you and me used to the idea of communicating with machines — and understanding what we can expect from them — simple things like traffic information or personalized route planning.

You may not see this materialize until the end of 2019, but there's a definite waft coming from Amazon and Google, so it's a fairly safe bet.

They see cars as a perfect environment for people to interact with speech assistants — far more than we would out in public — and to learn that binary thinking, like listening to a language tutorial while you drive.

And this really is the point. Rightly or wrongly, we're discarding long-held ideas about artificial intelligence having to get as good as humans.

The tables have turned — it's now about getting humans to be as bad as computers.

We've already seen this happen with the way we phrase our searches online — we've gone from full sentences to as few keywords as possible.

Is that lazy, efficient, or computer-friendly?

The way of the machine

Ever since the 1950s when the fathers of AI, Alan Turing and John McCarthy, first started talking about intelligent machines, engineers have focused on making machines imitate humans. They had to start somewhere, didn't they? So we got the Turing Test — as a benchmark for "what is human" — and computers beating humans at chess and Go.

Read more: Who's afraid of artificial intelligence in China?

But that was never the endgame for the tech utopians.

They are a pragmatic people, who would probably admit — privately — that it's too hard to get computers to think like humans in every conceivable situation. It's far easier to get humans to think like computers. And that's been the plan all along.

Indeed, who ever said human intelligence was even the best it can get?

Why should an AI settle for our — probably very low — level of intelligence? Why do we believe our fuzzy logic, with all its gray zones, to be the best?

For the tech utopians among us, and I'm not one of them, it seems like the best humans can do now is imitate machines.

And if that's true, then it won't really matter how AI gets used in healthcare, banking, cars, schools, or cooking and gardening next year, or five after that.

What matters is how you feel about it.