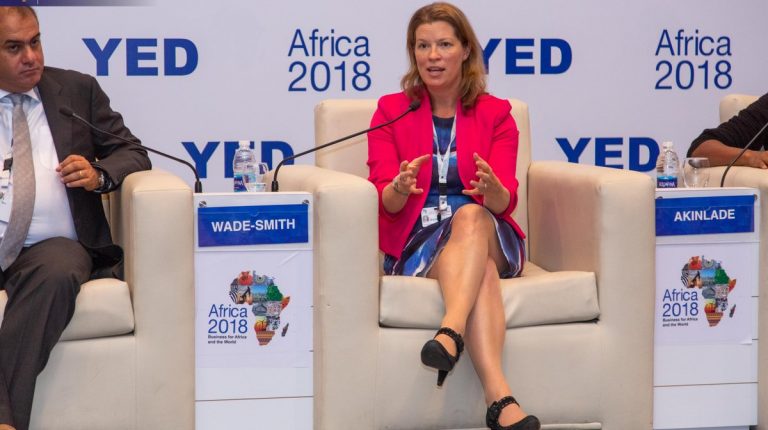 “Britain is not independent to conclude a free trade agreement alone with Egypt or any other country now. We are in a transitional period in which we seek to provide guarantees to the countries cooperating with us, not to affect the bilateral trade after the exit from the EU,” said the UK’s Trade Commissioner for Africa, Emma Wade-Smith, to Daily News Egypt during the Business for Africa 2018 forum held in Sharm El Sheikh.

Smith said that Egypt and Britain began discussions on the fate of the relationship between the two countries after the completion of Brexit.

“During the current transition, our negotiations with Egypt focus on reaching a form that ensures the continuation of trade exchange with the advantages and incentives applied in the free trade agreement between the EU and Egypt,” she said.

According to the commissioner, “The discussions with the Egyptian government are aimed at drafting guarantees in a form that cannot be defined as an agreement, especially since the UK is still part of the EU until March next year and cannot formulate individual agreements.”

Britain announced in 2016 its withdrawal from the EU, after a referendum that was endorsed by 17.4 million people (52% of voters). The Brexit is set to take place in March 2019.

Britain is seeking an orderly exit from the EU, and the British Prime Minister Theresa May is currently undertaking several European rounds of negotiations to introduce amendments to the final agreement, expected to be presented to the British parliament next month for a vote.

Smith said that Britain is seeking to be an international free trade point, after becoming able to individually enter into commercial agreements for the first time since 1948.

Moreover, she stated that her government will provide substantial incentives to facilitate the trade and investment between Britain and Egypt without the need to write a new agreement.

Smith noted that the UK seeks to increase the volume and value of intra-regional trade and investment with Africa in the coming period, in the light of the UK’s new policies.

She highlighted her participation in the 2018 Africa Forum organised by Egypt in Sharm el-Sheikh, which reflects the UK’s commitment to a future presence in the continent of Africa, and not only a mere reflection of the British presence.

“The UK is seeking to be the largest foreign investor in Africa by 2020 to benefit from the size of the market and the economic growth in the continent,” Smith further elaborated.

Moreover, Smith added that Britain’s interest is not only limited to entrepreneurs, but also focuses on small, micro, and large companies in Africa.

“Strengthening our presence in the continent is an old direction of the UK and is not linked to the plan to exit the EU,” she explained, further adding, “The UK is looking for opportunities wherever they are, and Africa is rich in opportunities with economic growth and large populations”

She noted that London will host an investment conference in Africa in 2019, during which new opportunities in the continent will be announced.

Notably, the commissioner described the Egyptian economy as diverse and able to attract more foreign investment, especially from the British market.

“I touched ,during my visit to Egypt, a real desire for economic reform. I will convey those messages to the British government and the private sector there,” Smith explained.

She estimated the volume of trade exchange between Egypt and Britain at £3bn in the last 12 months, and expected the figure to grow further in the coming period.

Moreover, she highlighted several common areas of cooperation between the UK and Egypt, including the provision of funds worth EGP 47bn to finance the ‘StartEgypt’ Programme, which is being implemented by Flat6Labs for the emerging companies and entrepreneurs, in order to develop their skills and prepare them to enter into partnerships with third parties.

She said that Britain provides trainings to the Egyptian nursing sector and supports the efforts of 86 British universities to cooperate with their counterparts in Egypt.

It is worth noting that the British commissioner for trade in Africa undertakes the role of promoting investment opportunities in Egypt and the African market, to her government and the UK’s private sector.

Smith illustrated, “I conduct searches for real opportunities and clarify the investment priorities of the British government and the private sector, through the reports that illustrate the areas of investment, and the possibility of investing in them.”

Regarding the economic reform in Egypt, she said she is communicating with the Egyptian government to find out its investment plans, and identify areas in which Britain can fully contribute, like the door-knocking campaigns.

Moreover, Smith added that Britain has an online site that offers opportunities for British investors and explains the different markets.

For the Egyptian door-knocking mission to Britain last month, Smith said it resulted in fruitful discussions that will become direct results in the coming period.

The Egyptian British Business Association organised a door-knocking mission to the British market between 27 and 30 November, which included 50 Egyptian and British companies working in the local market.

Smith said that the mission was followed by the arrival of British companies to Cairo to meet with Finance Minister Mohamed Moeit to talk about the future of relations between the two countries.

She concluded her discussion by stressing UK’s intention to continue investing in Egypt, given the success of the Egyptian government’s economic reform programme.