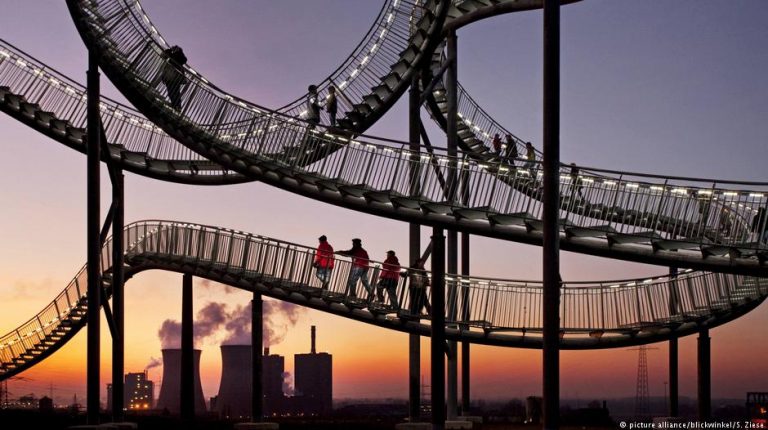 With Germany’s last black coal mine closing today near Bottrop in the Ruhr industrial belt, the former mining region promises to transform into a cultural powerhouse.When the Prosper-Haniel mine closes on Friday, Federal President Frank-Walter Steinmeier will be on hand to strike the death knell of a hard coal mining industry that was once the backbone of a resurgent postwar Germany.

But as a 200-year era of industrial coal mining in Germany comes to an end, the promise of a cultural transformation that began decades ago is set to take full shape.

From mines to galleries

While nearly half a million people once worked in the Ruhr coal and steel industry, a slow process of deindustrialization has caused major unemployment and hardship across mining towns in the western part of Germany.

That is where the culture and tourism industries have stepped in.

When Angela Merkel declared back in 2007 that the hard coal industry would be shut down by 2018, the race has been on to build on the cultural transformation that had been seeded in the Ruhr as early as the 1970s, when artists began to utilize abandoned industrial sites.

The massive Zollverein Coal Mine Industrial Complex in Essen that was shuttered in 1986, for instance, soon after became the home for major cultural institutions such as parts of the Folkwang University of the Arts. In operation for 135 years, it became an architectural monument when it was declared a UNESCO World Heritage Site in 2001.

Zollverein also anchors the European Route of Industrial Culture. As such post-industrial sites have been transformed into sustainable places of creativity and learning, it has generated more money for the region than dying coal mines.

Another standout site along the industrial culture route is the Gasometer Oberhausen, Europe's tallest exhibition hall created in a former storage tower for gas extracted from coking coal — once the biggest in the continent.

Today the tower is a unique post-industrial venue hosting exhibitions— including Christo's large-scale installation "Big Air Package"in 2013 — as well as theater and music of global renown. It also forms a key part of the European Route of Industrial Heritage (ERIH) that lies within the culture route.

Artists and curators that have utilized post-industrial sites across the region have cleverly interacted with the existing coal and steel heritage.

In the summer of 2018, 17 Ruhr region art museums — part of the Ruhr Kunst Museen collective of 20 regional museums created in 2008 in anticipation of the Ruhr becoming the European Capital of Culture in 2010 — co-curated an "Art and Coal"group exhibition to coincide the final colliery closures in 2018.

Among the 150 artists on show, the Bochum Kunstmuseum showcased works by local artist Andreas Golinski, whose installations reflected on the fate of miners working deep in the underground, and who described his imagery as "mental archaeology."

"Even if coal mining is over, there will be something fascinating, an aesthetic sense, which will be kept by the material, the people and the landscape which is shaped for generations," Ferdinand Ullrich, the former head of the Recklinghäuser Kunsthalle and the project coordinator for "Art and Coal" told Hypoallergic, an online art publication.

The show sought to interpret the relationship between coal mining and its mythology, the cultural identity of a region that was also shaped by immigrant workers from the Eastern Europe who came to work in the mines.

As part of "Art and Coal," an exhibition at Duisburg's Museum DKM called "The Dark Side" also reflected on the indelible connection between the coal and art industries. English artist Richard Long, for instance, looked at the evolution of coal from plant matter to fossil fuel using coal from the Ibbenbüren mine that was also closed this month.

"Coal brought the wealth that made the urban and private collections of art in our region possible," said DKW founder Klaus Maas, who was raised in a mining family. "There is too little talk about the Haniels, the Krupps or the Grillos, who put a lot of money into art and culture," Maas said of the industrial giants who have long funded the arts.

Meanwhile, the region that has now decommissioned all its hard coal mines — as opposed to the soft brown coal mines that continue to operate across Germany, despite ongoing negotiations for a full coal phase-out — is proudly showcasing its coal heritage.

The town of Bottrop long ago became an "innovation city" that supports climate-protecting solar panel and battery storage technologies. Yet the area is still cashing in on coal, including the display of the largest lump that has ever been mined — dug up from the Prosper-Haniel colliery that was shuttered on Friday.

Standing as a monument to a bygone era in the coking plant at Zollverein in Essen, the seven-ton slab of black coal was part of the major "The Age of Coal. A European History" exhibition running April-November 2018 that was also curated to coincide with the end of coal in the region.

While these exhibits bring visitors and global attention to the Ruhr, unemployment in the deindustrialized region is still more than double the rest of Germany. But if the rapid expansion of the culture industries continues apace, there will be light at the end of a long dark tunnel.