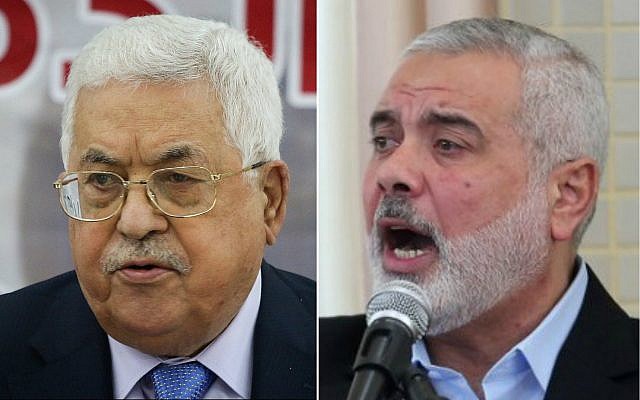 Ismail Haniya, Hamas’ leader, rejected on Saturday the dissolution of the Palestinian parliament, calling on the Egyptian government to stand against the procedures taken by Palestinian Authority’s (PA) President Mahmoud Abbas.

“We call on Egypt to block Abbas’ measures which are a fatal blow to the Egyptian endeavours aimed to achieve the Palestinian reconciliation,” Haniya said in a statement.

The statement noted, “Hamas stresses that it is prepared to run for consensual general elections in case Fatah pledges to accept the results, whatever they turn out to be.”

Moreover, the statement added, “Abbas opted to ruin the Palestinian political system, maintain his unilateralism, and dissolve the legal institutions of the Palestinian people. All of this is just to serve his partisan interests.”

Earlier on Saturday, Abbas announced the dissolving of the PA’s parliament, which is better known as the Palestinian Legislative Council, which isdominated by his rivals Hamas, and called for conducting legislative elections within six months.

In a meeting with members of the Palestinian leadership in Ramallah, Abbas said that the Constitutional Court ruled the dissolution of the PA’s parliament. “We have to implement ‘this decision’ immediately,” Abbas noted.

Since winning the elections in 2005, Hamas has controlled the PA’s parliament. However, the parliament’s missions were suspended in 2007 over the electoral dispute between the two Palestinian factions, Hamas and Fatah.

Egypt brokered several attempts to reach a reconciliation deal between the two faction rivals, aiming to end the Palestinian split. However, the talks did not succeed.

The most recent attempt came from Russia, which offered to host a meeting between Abbas and Haniya. According to the Russian Deputy Foreign Minister Mikhail Bogdanov, Haniya is expected to visit Moscow by the start of next year.

Hamas welcomed the Russian invitation, asserting its readiness to end the split and reach national reconciliation.