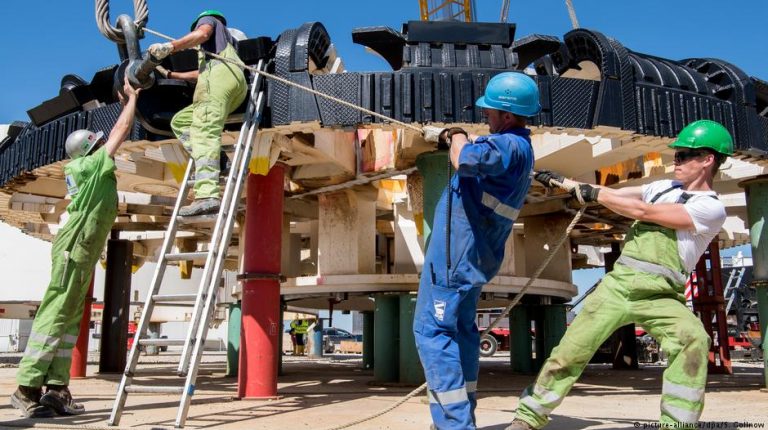 Over nearly 10 years, the world economy has been growing by a moderate but steady clip. In 2019 though, risks such as Brexit, trade wars and higher interest rates could spell the end to an unprecedented economic boom.After boom comes bust — few economists would disagree that this eternal rule of free market-based or capitalist economies is as true today as it was, say, 150 years ago. A similar consensus seems to be emerging in the profession about the current business cycle, which many say is nearing its end — in 2019, or 2020 at the latest.

At the time of writing though, the post financial crisis economic boom still seems well set on becoming the longest expansion in many countries. If the American economy, for example, makes it past June 2019 without a recession, the recovery will exceed 120 months and become the longest expansion since US economic records were first taken in 1857.

Yet, global data trackers, including the International Monetary Fund (IMF) and the Organization for Economic Cooperation and Development (OECD), are less optimistic about ongoing growth in the rest of the world. The IMF, for example, thinks global growth plateaued at 3.7 percent in 2018.

But is lower growth in some economies only a sign of a normal, cyclical downturn? Or will this develop into a global recession or even a new economic crisis? Answers are yet few and far between, but underscore assumptions that the global economy is at a crossroads in 2019.

Growth engine running out of fuel

In 2018, the US economy proved to be the prime engine of global growth as tax cuts and additional government spending initiated by President Donald Trump strengthened the business cycle, also creating higher US sales for companies abroad.

But growth rates of 4.2 percent and 3.5 percent, as recorded in the second and third quarters of 2018 respectively, are unsustainable for a country grappling with an aging population and slow productivity growth. Moreover, the additional boost from Trump's tax reform is expected to ebb out in the second half of 2019.

On the other hand, the US's outperformance in terms of business activity and asset prices has its downsides. It's caused a massive inflow of foreign capital, which has put vulnerable economies elsewhere under pressure. Janet Henry, global chief economist at HSBC, sees a simple dynamic playing out in the global economy right now.

"The US is booming, while most of the rest of the world slows or even stagnates. The stresses caused by this divergence are playing out uncomfortably in many emerging economies," she told DW.

At the same time, the US Federal Reserve is raising interest rates to keep the economy from overheating. This means that economies with chronic trade deficits are finding themselves competing for foreign funds and have to raise their own interest rates, which suppresses growth.

US interest rates will most likely continue going up, which in turn will hit emerging economies hard in 2019, especially those with huge hard currency, or dollar-denominated debt.

"Countries with high dependence on foreign financing and with domestic currency mismatch [debts in foreign currency] have been the first ones to suffer from tighter global financial conditions," Ricardo Adrogue, head of emerging market debt at Barings, recently said in a note to investors.

In this respect, the most unwanted headlines in 2019 will probably be created by Turkey and Argentina, whose currencies were already among the worst performing in 2018. The IMF also sees funding problems for Brazil, Mexico and Iran.

Read more: Are we about to face a new Asian financial crisis?

But those problems are rampant all over the world as the global debt pile is now larger than at the height of the global financial crisis a decade ago. At the end of 2018, it stood at $184 trillion (€162 trillion), which is 250 percent of the world's gross domestic product (GDP) and 12 percent higher than at its previous peak in 2009.

Especially how China's huge debt problem will play out is a big unknown for 2019. Households, businesses and administrations there have accumulated debt of 200 percent of GDP. As the government tries to throttle credit growth, the economy is bound to suffer. The good news is that Beijing still has enough firepower to keep growth above the 6 percent it needs to avoid social unrest.

Tightening financial conditions on a global scale and lower state revenues due to weaker growth are already posing major challenges to further growth. Add to this an expected drop in global trade in the wake of protectionist policies, and you have a triple whammy hammering business in 2019.

The IMF has calculated that Donald Trump's trade war against China alone, if current plans are implemented, will cut US growth by 0.9 percent and that of China by 0.6 percent over the next few years.

"The consequences of escalating trade actions are undeniable: higher prices in China and the US, less purchasing power for consumers, higher input costs, heightened financial market volatility, and possibly higher interest rates," Jean-Francoise Perault, chief economist at Scotiabank, told DW, adding that these effects would likely spill over to other countries.

For Europeans, the most important date on the 2019 calendar is March 29 — the day when Britain will leave the European Union, though in what fashion remains to be seen. UK Prime Minister Theresa May's recent difficulties in getting a Brexit deal with the EU approved by Parliament has been raising the specter of a no-deal exit — the worst-case scenario.

Holger Bingmann, president of the BGA — a trade association which represents the German wholesale, foreign trade and services sectors — describes the current state of affairs as "a mess" for business contingency planning.

"Just three months before the deadline, companies still do not know what to expect and how to proceed. The next tremor of the Brexit quake will be felt on both sides of the English Channel. This is an unprecedented disaster," he said in a statement to DW.

But businesses in Europe will have more to worry about in 2019. There could even be a return of the financial and sovereign debt crisis that's been keeping growth in several eurozone countries below par compared with the rest of the world. Italy is the most striking case in point, because the country's recent standoff with Brussels over its 2019 budget still has the ability to upset its ailing banking sector.

Coming amid the lowest growth for any eurozone country in years, the policy of the populist government in Rome to intentionally overshoot its spending targets has already undermined market confidence, with investors demanding higher interest rates for buying Italian debt.

Financial markets were already sounding the alarm as the yield spread — the difference between Italian and German debt yields — surged to 3.4 percentage points at the beginning of the standoff in October. Anything beyond 4.0 percentage points, analysts say, would make refinancing its debt impossible for the government, and failure to do so would drag many banks in Italy and beyond down with it into the abyss.

A formidable storm is also brewing in France, Europe's second-largest economy, where President Emmanuel Macron is likely to violate the EU's budget limit of 3 percent, after making costly promises to appease the "yellow vest" protesters. All this against the background of slowing growth in Germany — Europe's engine of growth in the past decade — and a European Central Bank that's lacking the necessary firepower to stem the economic slide.

The central bank for the euro area has kept interest rates at an historic low of zero percent for most of the decade. In December 2018, it decided to cease its massive asset purchases and to begin normalizing rates in 2020 — quite the opposite of what's needed in times of a downturn.

So, although the full picture for 2019 is still a bit murky, economic developments — if they go wrong — could indeed herald the beginning of the end of the 10-year global economic bull run. But remember the famous quip by Danish physicist and Nobel laureate Niels Bohr: "Prediction is very difficult, especially if it's made about the future."