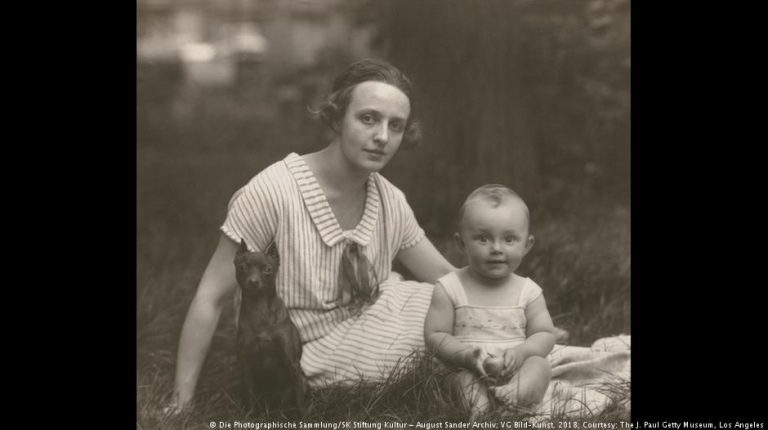 Entertainers, families, and entrepreneurs modeled for photographer August Sander. His portraits of German society marked a turning point in the history of photography, and can now be seen at an exhibition in Cologne.A tender smile, a curious glance into the camera; It seems as if the young mother has settled with her son on the lawn for a moment, a few blades of grass are scattered over her dress. German photographer August Sander (1876-1964) captured this happy moment in the summer of 1926. Sander, from the Westerwald on the river Rhine, knew how to lessen the distance between the model and the viewer effortlessly, and always conveys a feeling with his photos. He saw the world as it was and not as it should be.

The son of a miner, Sander achieved worldwide fame with his extensive portrait work People of the 20th Century. The epic, which took more than 60 years to finish, provides a cross-section of the German population and depicts representatives from numerous occupations and all sections of society, often spread over generations. The SK Kulturstiftung in Cologne is currently showing a representative selection of 150 pictures from the collection, including all 60 photographs from the book Antlitz der Zeit (Face of Our Time) published in 1929.

From craftsman to artist

Before Sander defined his concept for People of the 20th Century, he had already photographed dozens of people. From 1910 he ran a portrait studio in Cologne and took commissioned photos of large companies, pharmacists and football clubs. At the same time, he wandered through the surrounding villages, where he was asked by many families to take pictures of their relatives and loved ones. In this way, a vast pool of images from a variety of occupational groups and social classes developed.

During his time in Cologne, Sander finally came into contact with the Die Kölner Progressive (The Cologne Progressives). The avant-garde movement around Heinrich Hoerle and Gerd Arntz had set itself the task of depicting the people and social structures of German society. They wanted to distance themselves from the spiritualized currents of art, to return to the world of the visible. As a consequence, Sander devoted himself to the systematic reappraisal of German society in the years between the Weimar Republic and the immediate post-war period.

The Mirror of Time

In the style of the New Objectivity movement which emerged as a reaction against expressionism, Sander built a collection of what would become iconic portraits of the 20th century: beggars, workers, farmers, artists, civil servants, politicians, clergymen. The result was a perspective of life in Germany that cannot be found anywhere else. By viewing individual photographs as part of his opus, Sander is also regarded as a pioneer of objective, conceptual documentary photography.

The photographer divided his work into seven categories: "The Farmer," "The Craftsman," "The Woman," "The Stands," "The Artists," "The Big City," and "The Last Humans." The latter group represents the term for those who lived on the margins of society, including beggars, the sick, and the dying. Sander chronicled these people's lives with a high degree of respect and sensitivity. He then listed the individual occupational groups together in his volumes and exhibitions, and leaves the observer to observe where similarities and differences are to be found.

The person behind the photo

"With the help of pure photography it is possible for us to create portraits that faithfully reproduce the people concerned in all their psychology," Sander wrote in a letter dated 1925. Sander also wanted to trace the individuality and psychological state of his subjects — the personal value of his photographs was as important to him as documentary neutrality.

Behind the portrait pictures of the "People of the 20th Century" collection are numerous people and stories. How did the subjects spend their lives? What events left their mark on their faces and hands? Some of the questions can still be answered today. As around 80 percent of the pictures were commissioned works, it is now possible to trace back the subjects of many of the photos. Sander also built longtime connections with some of his subjects beyond his photography work.

The Face of Time

Cologne's Art Museum exhibited the first 100 photos from People of the 20th Century as early as 1927. Two years later, the book "Antlitz der Zeit" was published, which combined 60 portraits and a foreword by the German novelist Alfred Döblin. "How to write sociology without writing, but by taking photos, photos of faces and not traditional costumes; that's what the photographer's gaze creates, his spirit, his observation, his knowledge and not least his enormous photographic skill," Döblin exulted.

With his unique portrait style, Sander distanced himself from the usual studio photography where protagonists pose artificially with props. As a pioneer of real documentary photography, Sander's photographs are still regarded today as an inspiration and benchmark for young generations of photographers.

The exhibition "August Sander: Masterpieces – Photographs from "People of the 20th Century" can be seen in the Collection/SK Kultur in Cologne until 27 January 2019.