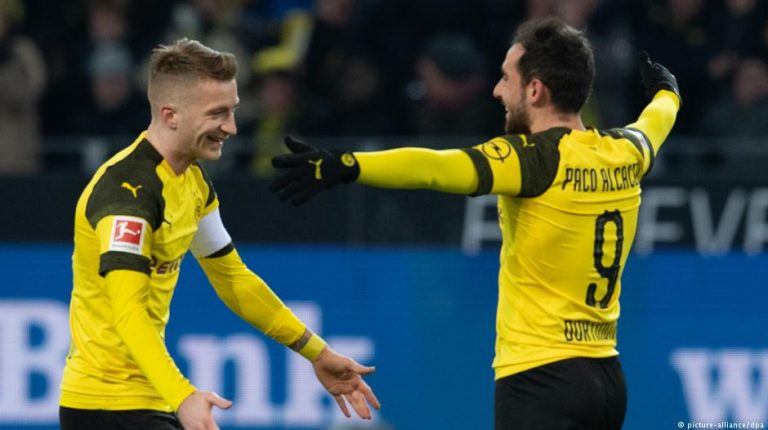 Surprise leaders, crises, fallen giants and supersubs; the first half of the Bundesliga season hasn’t been low on incident. DW takes a look back at how it’s all unfolded and what’s in store when the league returns.The leaders

Borussia Dortmund no longer appear invincible but they are still top of the tree at Christmas, thanks to a scintillating run that saw them win 12 and draw three of their first 15 games. Lucien Favre's coaching methods, the late signing of supersub Paco Alcacer, the consistent fitness of Marco Reus and the rapid development of a host of young talents headed by Jadon Sancho has seen BVB rise from a turbulent 2017-18 to become one of the most exciting sides in Europe.

The Swiss coach refused to get carried away during the run that saw his side break all kinds of records, both individual and collective, so he won't have been too fazed by the setback in Düsseldorf. Favre's side responded well to that with a win over Gladbach on Friday and how they respond to further knocks, how they deal with injuries and how they cope with the increased pressure and workload will be critical.

In recent years, Bayern’s Bundesliga seasons have been plain sailing but the first half of this term has seen them hit much choppier waters. After a dominant start to his reign, Niko Kovac saw his team go without a win in four games against modest opposition as September became October – a blip for most but a crisis for Bayern. Much like the German national team, Bayern looked slow, indecisive, old and suddenly very beatable.

Like Joachim Löw, Kovac has gradually started to bring young blood in to his side and results and performances are starting to improve. For all the talk about this being a transitional season, Kovac admitted that Dortmund's loss in Düsseldorf was "an invitation we had to make the most of." Bayern did and, with Liverpool to come in the Champions League, must be ready to pounce if their rivals stutter. They normally are.

While a proper title chase is a welcome change, the chase for European spots always seems to be an exciting affair in Germany’s top flight. This year looks no different. Borussia Mönchengladbach's stunning home form, Hoffenheim's wild attacking style, Frankfurt's prolific front three and Wolfsburg's steady rise have all contributed to a bunched peloton behind the top three.

All of those sides have shown themselves capable of the sublime and the ridiculous and a good run can see teams rise rapidly up the table. There's a feeling that at least one Champions League spot is up for grabs, it's just a matter of who can manage their squad well enough to take it. Gladbach, Hoffenheim and Wolfsburg may feel that their lack of European football will give them a slight edge.

Last season, Domenico Tedesco's Schalke would have been firmly in the previous grouping. A superbly organized defense, a strong team ethic and the inconsistency of others helped the Royal Blues to a second-place finish. The problem with a gameplan based on solidity is that when that fails there's not a lot to fall back on. Beset by injuries to strikers, Schalke have scored more than once in a match on just three occasions. It's clear where improvement must be made.

Despite having some of the best attacking talent in the division, Bayer Leverkusen have also struggled. Julian Brandt and Leon Bailey – two of last season’s most exciting forwards – have just two goals between them. Coach Heiko Herrlich never seemed to be more than two games from the sack and, despite a run of four wins in five games, the axe finally fell on Sunday.

As with the race for Europe, nothing is even close to decided in the battle to beat the drop but Nuremberg currently have the gravest concerns. The bottom side haven't won since September, have the division's worst defense and its second worst attack. But still they remain just three points from the relegation playoff spot, occupied by Stuttgart.

The gap between the top flight and the second division is neatly demonstrated by the fact that the last four clubs to get promoted (Nuremberg, Düsseldorf, Hannover and Stuttgart) make up four of the the bottom five, with Augsburg the exception. So far, Stuttgart are the only club in the bottom half to change coach. But with the relative riches on display in the Bundesliga seemingly critical to success, it surely won’t be long before another club pulls the trigger.

Bayern's struggles have meant several less-heralded players have been able to make their mark this term. Reus, Sancho and Alcacer have formed a potent attacking trio for Dortmund with 29 goals between them. But perhaps more impressive, and certainly more surprising is Frankfurt’s attacking trident. Sebastian Haller, Luka Jovic and Ante Rebic have 26 strikes between them despite having cost less than €10 million ($11.4 million) combined (though Jovic is initially on loan).

Thorgan Hazard has caught the eye at Gladbach and may finally be moving out of the shadow of brother Eden. Further back on the pitch Achraf Hakimi has given Dortmund a new dimension at full back, Joshua Kimmich has retained consistency despite Bayern's woes while Salif Sané has been a shining light for Schalke. Elsewhere, Joelinton and Kerem Demirbay have impressed for Hoffenheim while Timo Werner has put a poor World Cup behind him and Alassane Plea has proved an astute signing for Gladbach.