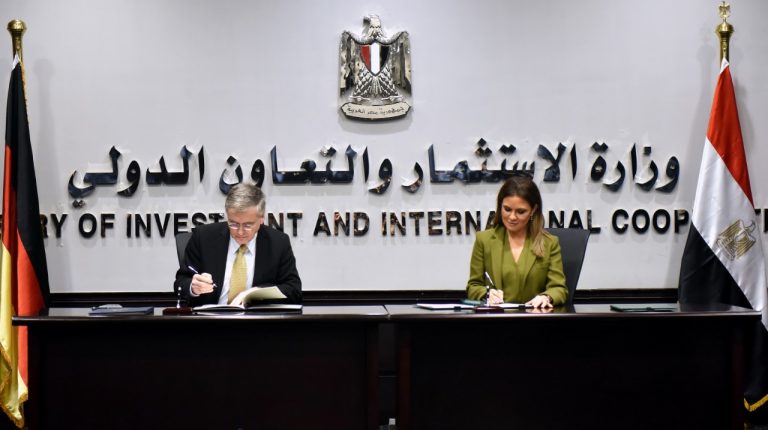 Egypt’s Minister of Investment and International Cooperation, Sahar Nasr, signed with the German ambassador to Cairo Julius Georg, a couple of technical and financial agreements worth €150.5m on Sunday morning.

Nasr explained that the first agreement is worth €48m and is in the field of education, aligning with President Abdel Fattah Al-Sisi’s initiative to invest in human capital, as well as to support infrastructure, environment, agriculture, water, sanitation, and the small and medium-sized enterprises (SMEs).

The second agreement is worth €102.5m for some projects in the fields of electricity, renewable energy, energy efficiency, agriculture, as well as the SMEs, Nasr added, affirming that financing will be provided for areas with the most need, with a special focus on women and youth.

“During negotiations of the current two agreements, we were very keen on linking them with the youth training and skills’ development, in order to benefit from the German experience in the industrial sector,” mentioned Nasr, praising the German-Egyptian model of cooperation, as it is considered one of the best partnership models, in terms of following the government’s priorities, and improving peoples’ quality of lives.

The minister asserted Egypt’s eagerness to intensify and diversify its economic, developmental, and investment cooperation with Germany, as part of the implementation of the agreement between President Al-Sisi and German Chancellor Angela Merkel, during their latest meeting in Berlin.

Nasr stressed the importance of increasing Germany’s investments under the strategic relations between both countries, adding that Germany’s investments in Egypt are about $641.4m, with a number of 1,103 companies in the sectors of chemicals, oil, telecommunications, gas, automotive industry, iron, and steel.

For his part, the German ambassador to Cairo praised his country’s cooperation with Egypt, adding that the recent agreements come within the framework of strengthening the relations between the two countries, and affirmed the importance of the joint cooperation between Egypt and Germany.

The ambassador stressed his country’s desire to increase its support to Egypt during the next period, on the economic level, praising the economic reform measures that the Egyptian government is working on, which positively reflects on the cooperation between Egypt and Germany.

“The economic measures undertaken, as well as the improvements in the investment environment, encourage German companies to increase their investments in Egypt,” said the ambassador, stressing the strategic and deep relationship between Egypt and Germany.

Additionally, the ambassador praised the improvement of the Egyptian economy’s indicators, stressing that the German Construction Bank and the German Agency for International Cooperation have the ability to provide more expertise and capabilities to serve the economic and the developmental cooperation of the two countries, after the establishment of two offices in Cairo.

Germany ranks as 20th in the list of countries investing in Egypt, aiming to upgrade Egypt’s position to become among the top 10 investing countries among its markets.

Earlier in October, the ambassador told Daily News Egypt that the expected trade exchange between both countries by the end of 2018 will record over €6bn, which is more than 2017’s figure, noting, “I can’t define a specific figure for the whole of 2018’s trade exchange because it is a private sector issue, not a governmental-coordinated approach.”

The ambassador said that 2018 witnessed several bilateral business missions, noting, “there is a considerable interest from German businesspersons to invest in Egypt, as well as to boost the trade exchange.”

From the 28th to the 31st of October, President Al-Sisi paid an official visit to Germany in order to discuss boosting the bilateral relations between the two countries, where a large business delegation accompanied the president, a joint business forum was held, and some agreements were signed.