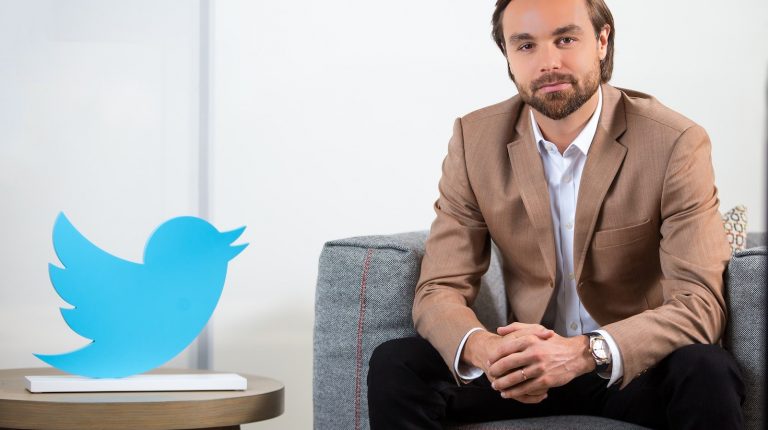 Twitter can be described as one of the top online news and social networking platforms on which users post and interact with messages known as “tweets”.  California-based Twitter Inc has more than 25 offices around the world.

Created in 2006 by Jack Dorsey, Noah Glass, Biz Stone, and Evan Williams, Twitter managed to rapidly gain worldwide popularity. In 2012, over 100 million users posted 340 million tweets a day, and the service handled an average of 1.6bn search queries per day.

In 2013, it was one of the ten most-visited websites and has been described as ‘the SMS of the Internet’. As of 2016, Twitter had more than 319 million monthly active users.

The social media platform has been the centre of debates and news covering politics of the United States and elsewhere, especially during the 2016 US presidential election, Brett Kavanaugh’s Supreme Court nomination, and 2018’s US Midterms.

Twitter proved to be the largest source of breaking news on the day of the 2016 election, with 40m election-related tweets sent by 10 pm.

Daily News Egypt interviewed Twitter’s Middle East and North Africa Managing Director, Benjamen Ampen, to find out about the company’s latest financial results and future plans, the transcript for which is below, lightly edited for clarity: 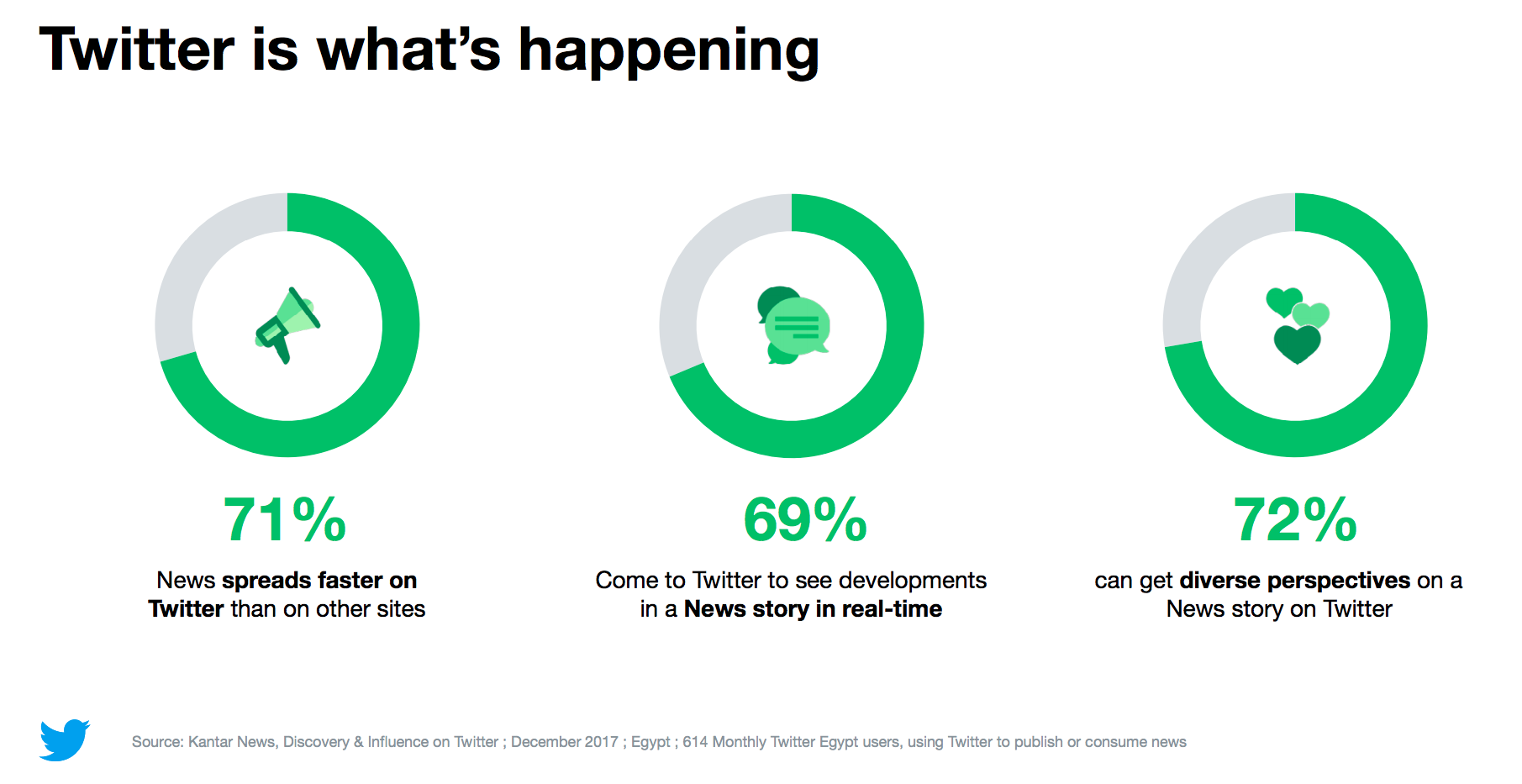 How did your business perform in the third quarter (Q3) of 2018, what did you do differently?

We managed to increase our advertising revenue by 29% year-over-year (y-o-y). We actually did not do things differently. These trends of revenue growth have been going on for several quarters, and this is the result of different efforts that we have been doing on our products. When you think about it, we wanted to make sure that we kept improving the value for advertisers, through better engagement and ad-relevance.

As a social media platform, we fully took advantage of the original investment for advertisers in terms of value – engagement and reach – and price.

It has never been clear what Twitter specifically brought to businesses, but we now know that Twitter has the most valuable and receptive audience. It is a message that we have been perceiving, and now the market is responsive to it.

Do you think that the current growth rate is sustainable?

For the remainder of the year and the year after, we are very optimistic about our ability to maintain our priorities and value for advertisers. Making sure advertisers will reach their audiences when they are most receptive is one of our priorities, so they can get better returns and engagement. We also make sure to build trust with our customers. In Twitter, we want to keep our leadership in terms of quality, transparency, and accountability.

Increasing ad revenue growth without affecting the quality of user experience is a challenge, how do you plan to keep this balance?

It is a very important point. We prioritise the platform users’ experience and the health of the conversation. When you look on Twitter, you need to think about what we are advertising on it—unlike other platforms—we only take content that already exists in public, and use our products to amplify it. As it is very selective, we are really far from ad saturation.

At the end of the day, what matters is the relevance of these ads, if we manage to present ads that are really relevant to users, we will know because they will engage them, unlike other social media platforms.

To summarise, first, we keep in mind the health of the platform, to ensure peoples’ safety, followed by content relevance. Second, we are working on our products to ensure that they add value to our users. Third, we keep a very close eye on how we think about advertising on Twitter, because advertising should not be a nuisance. 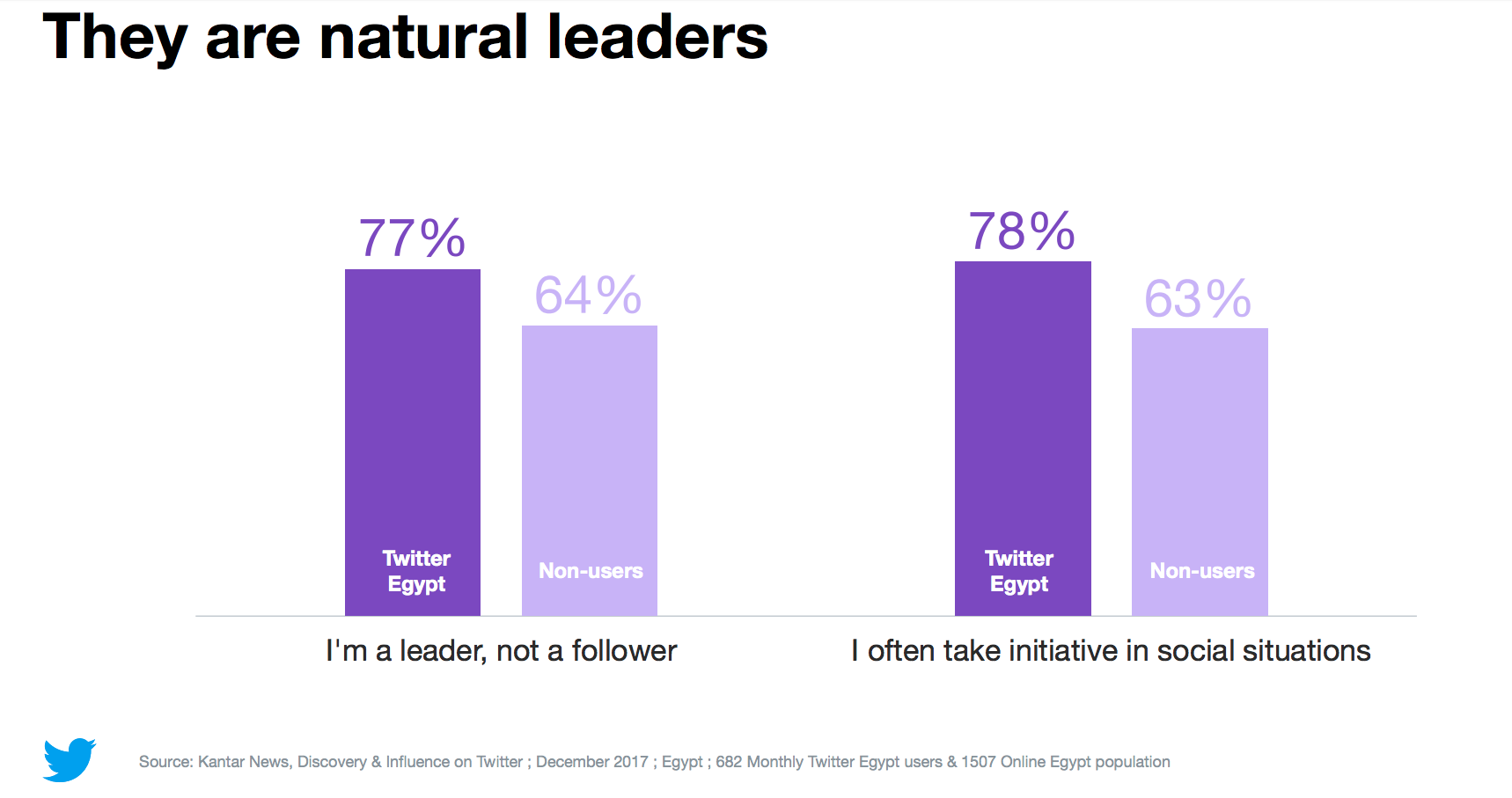 Data privacy was one of 2018’s controversies; as a platform how do you protect your users’ data?

This controversy about data is linked to the health of the platform. Twitter is very unique because it is public, so when you think about the tweets on the platform, they are public and searchable. The majority of Twitter users choose to engage in public conversation, so any data we have is not private. It is very important to highlight that we do not provide any personal data, only the ones that are already public.

How can Twitter balance protecting freedom of speech and combat hate speech?

Improving the health of our platform is our main objective. We are fundamentally rethinking how the platform works, so that together we can increase the collective health, civility, and openness of the conversation on Twitter.

What are the latest developments about Twitter’s new verification standards? When can we expect it?

Verification was meant to authenticate identity and voice, but it was misinterpreted as an endorsement or an indicator of importance. We recognised that we have created this confusion and are working to resolve it. We have suspended all general verifications and we will report back soon.

For Arabic Twitter, can you tell us about the original Arabic programmes that were produced on Twitter?

Globally, when we are talking about our numbers, we mention higher engagement. We have a 9% y-o-y user growth, which is a good indicator. I am mentioning this because with local presence – like our regional office – we are making sure that we contribute to that.

In the Middle East and North Africa (MENA) region, we recognise the appetite for high quality and premium content. Taking into consideration that most of the region is actually talking in Arabic on the platform, we make sure that we provide programmes that add value to the users.

We introduced three Arabic language programmes that were produced by our partners. Twitter is not producing this content, we work with the best content producers out there.

In Ramadan, for example, we introduced a programme called #HawanahZein, which is an evening Arabic show that focused on what was happening in the Arab world on Twitter during the holy month. The show attracted an average of half a million viewers per episode.

During the FIFA World Cup, we introduced #YallaGoal, an evening Arabic show, which focused on football-related news on Twitter during the tournament. The show had an average of 400,000 viewers per episode. All in all, the show attracted a total of 10m video views, which included both the live episode and highlighted clips. In Egypt, this show had different people presenting the talk show, one of them was Hany Hathout, the famous Egyptian sports presenter, to make it more relevant to the region and Egypt. As Egypt is one of the most important markets when it comes to football, this show was filmed in Cairo.

Most recently, Sayidaty, a women fashion magazine, launched #FrontRow, an evening Arabic fashion series, that coincided with the Big Four Spring 2019 fashion weeks in New York, London, Milan, and Paris. The show generated an average of over 260,000 viewers per episode. All in all, the show generated a total of more than 6m video views, which included both the live episode and highlighted clips. This is the first live fashion news series to ever take place on Twitter—globally.

*Editor’s Note: live streams of fashion runway shows have taken place on Twitter but there have never been any fashion news series until this show was launched. 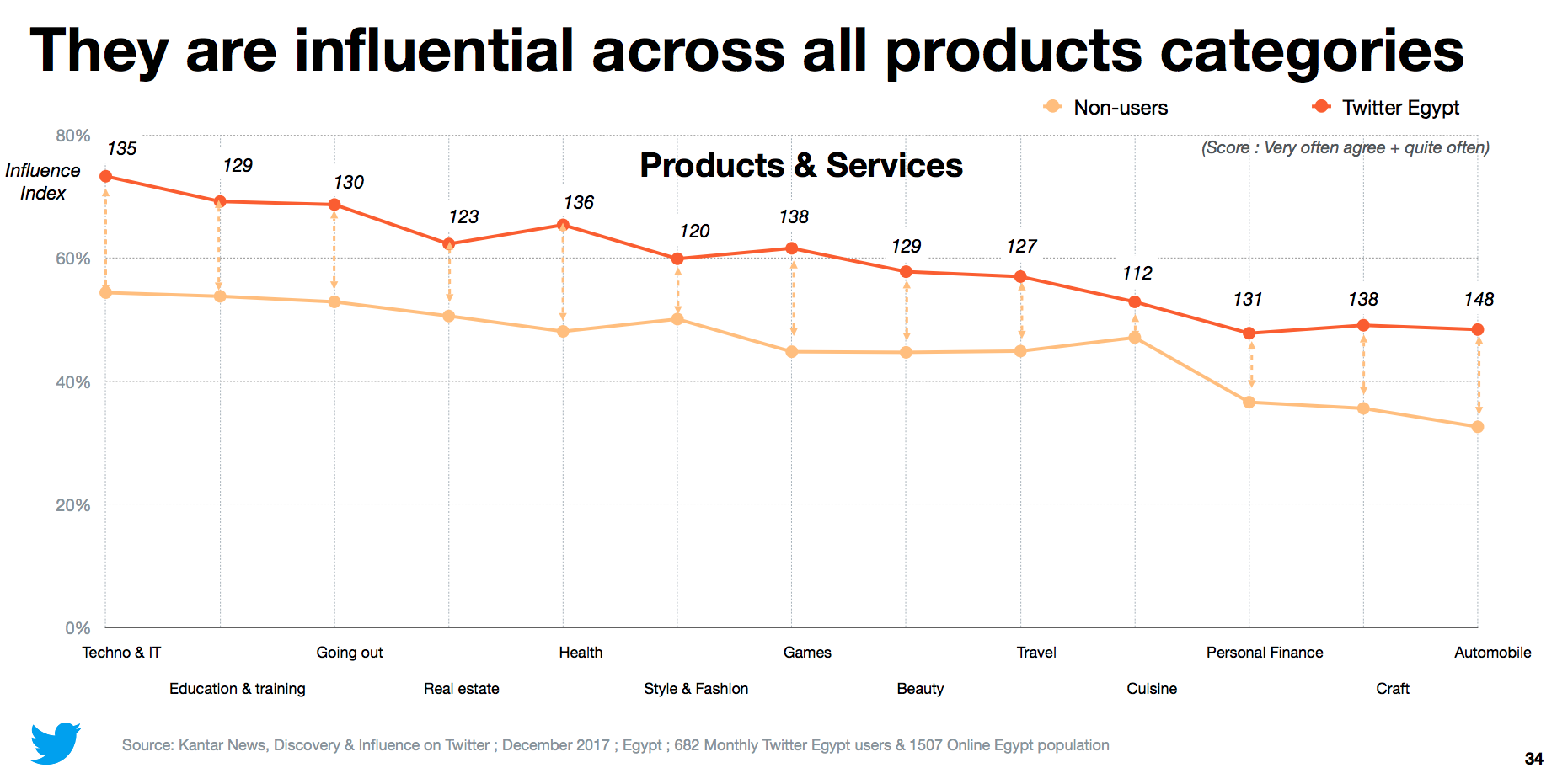 We do not break down our revenues by country or region. However, we can say that Egypt is one of the top 20 fastest-growing markets globally. For the region, although I cannot share the exact number of revenues, I can tell you that we are at an all-time high.

How do you plan to increase Twitter’s penetration in Egypt?

When we think about Egypt, we know it is the biggest country in the region. Consequently if we want to grow on the long-term, we need to invest in this country, and that is something we have been doing through several initiatives. Earlier this year, we had a team working on Egypt’s presidential election, ensuring that the poll results were streamed to increase engagement. In all the world, not only Egypt, elections are usually a big driver of user growth.

During the FIFA World Cup, we had a content publishing team dedicated to the Egyptian national team, as we understand how important football is in Egypt, so we saw it as an opportunity for us. We made sure that the full squad were on Twitter. It was not only about Mohamed Salah, as the other players are important as well to the Egyptians. We had video highlights on the platform about what the Egyptian team was doing during the tournament, in partnership with Presentation Sports.

In the next year, there will be more programmes as well, bringing new users on the platform. On the advertising side, we have been working a lot with different organisations that can have an impact, such as the World Youth Forum in Sharm El-Sheikh.

When it comes to ‘Twitter moments’, do you plan to introduce country-specific moments?

Twitter is about what is happening in the world, more than something specific in a certain country. In Egypt’s case, ‘moments’ are curated for Egypt, however, some regional moments are also included, and the chronology of publishing moments varies based on whom the publisher is following. 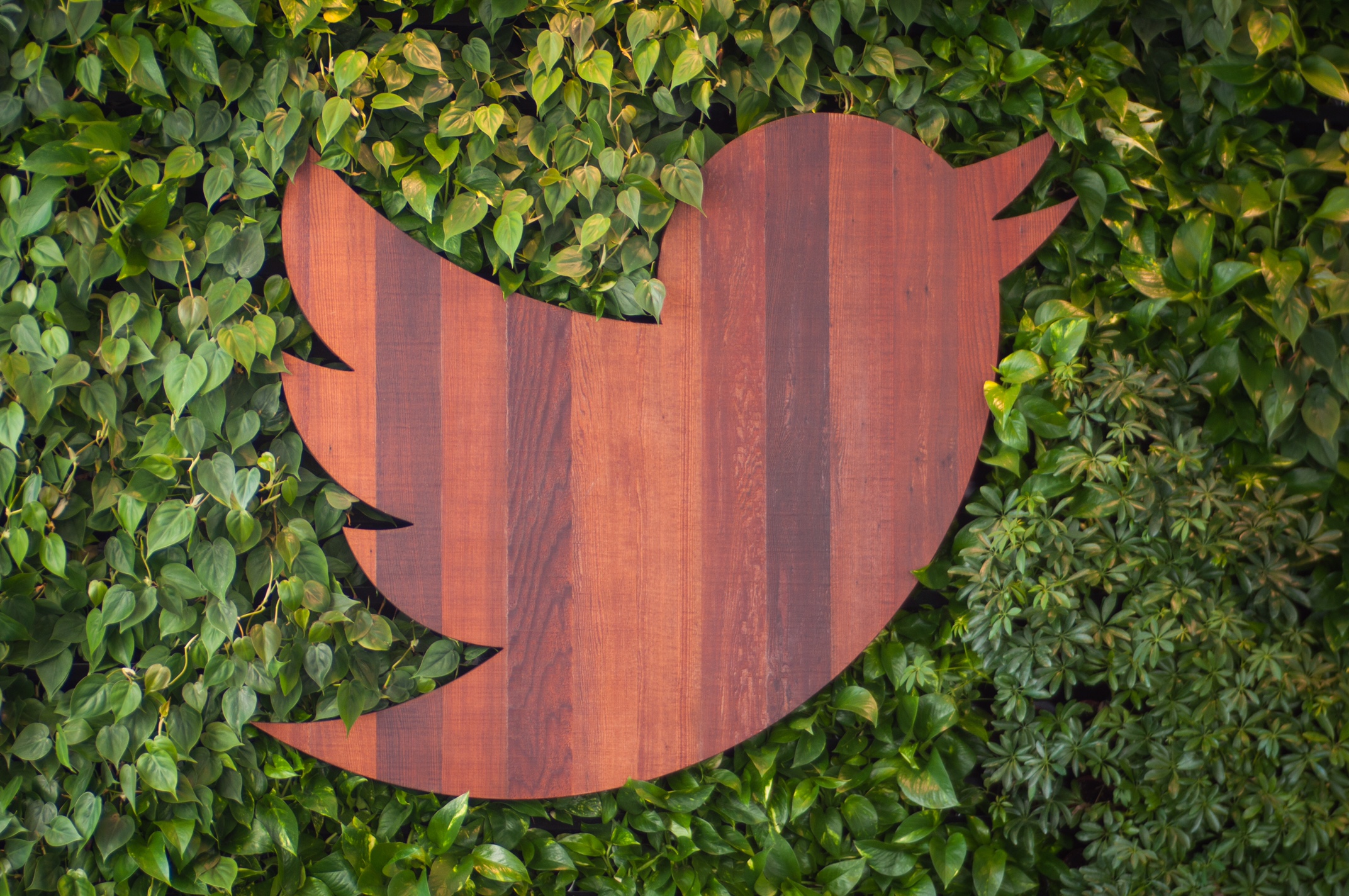 You have recently conducted a study, have you shared it with marketers?

The study confirmed what we have already known, that Twitter users are more valuable, as people on Twitter usually aim to discover and engage with new content.

In Egypt, the study confirmed that Twitter is the best place to see ‘what’s happening’, to follow developments in real-time and to ‘see every side’.

In this study, Twitter wanted to better understand why its users are turning to the platform to see what is happening, and what makes their user experience unique. Watching news in real-time, as it happens, and being closely immersed in the action is one of the main strengths of Twitter, with 72% of users turning to Twitter for news (85% amongst daily users).

In terms of user experience, the findings revealed that people who want quality news turn to Twitter. Users in Egypt like to use the platform because news spreads faster on it (71%), they can follow developments in real-time (69%) and can ‘see every side’ of a story (72%). They are also heavily reliant on Twitter for news, when something is not discussed on Twitter, they question its significance (61%).

What are the latest product changes that you have made?

We keep on pushing a lot on videos, because today more than half of our revenues come from videos, so we keep on investing in it. We have also added the ability to stream audio only. What is interesting that we have seen that a lot of people used our streaming options for audio only.

Twitter has managed to remove a tonne of fake accounts during your latest campaign against the issue, will we see more removals?

As we discussed today, health is our main priority in Twitter, and removing spams is an essential step towards achieving this goal. This is not just a campaign, it is something that we will continue doing, and recently we introduced more measures to handle spams and data manipulation.

We have reduced the visibility of suspicious accounts, to ensure that it is not possible to artificially boost an account, and we have created an update to enforce the fact that every account must validate itself by using an e-mail and a phone number.