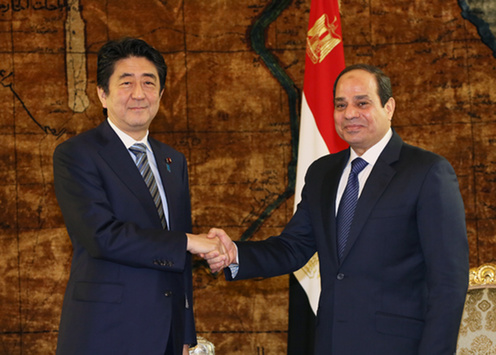 “We want to arrange for Japanese companies a meeting with Egypt’s president during the planned visit in March. JETRO’s Chairperson, Hiroyuki Ishige, visited Egypt last April and met with President Al-Sisi, who requested to have additional meetings with company executives in the future,” Tsunemi mentioned.

Egypt and Japan enjoy a very good business relationship, asserted Tsunemi, declining to specify the exact number of the Japanese companies that will participate in March’s endeavour.

“We are in an early stage, so we aren’t sure about the numbers yet. However, we will also organise additional individual meetings with Egypt’s Minister of Investment and International Cooperation, Sahar Nasr, and the Minister of Trade and Industry, Amr Nassr,” elaborated Tsunemi.

Notably, Al-Sisi visited Japan from 28 February to 2 March 2016, and met with the Prime Minister of Japan, Shinzo Abe.

Many Japanese companies informed JETRO about their expansion plans in Egypt’s infrastructure fields, not only in Cairo but also in other governorates, revealed Tsunemi.

Masaki Noke, the Japanese ambassador to Egypt, said that about 50 Japanese companies are working in Egypt, according to local media reports in November. He added that Egypt is already a good export destination, but the amount of trade exchange is still modest.

JETRO held three seminars for the Japanese companies in Britain, Germany, and most recently in Tokyo, Japan where 200 Japanese businesspersons attended and expressed their aims to see the possible opportunities of conducting business with Egypt, mentioned Tsunemi.

Some Japanese companies started doing business with Egypt in 2018, one of them is a medical device company which has expanded its trading relations with Egyptian counterparts, added Tsunemi.

JETRO, which has eight offices in Africa including its office in Cairo, promotes mutual trade and investment between Japan and the rest of the world, boosts foreign direct investment into Japan, and helps small to medium-sized Japanese firms maximise their global export potential.

JETRO Cairo was first established in 1955 with the aim of promoting trade between Japan, the Middle East and North African countries. JETRO Cairo is in charge of Egypt, Jordan, Lebanon, Syria, Libya, and Sudan.