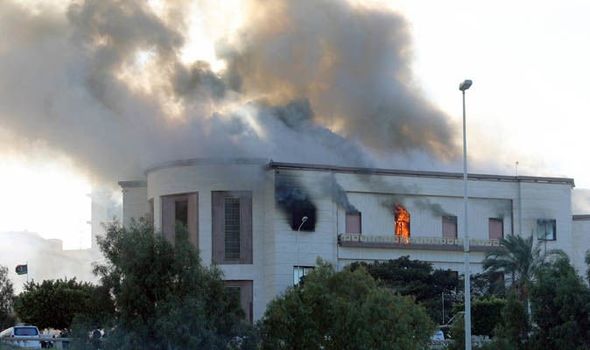 At least three people have been killed in a suspected Islamic States (IS) suicide and gun attack against the headquarters of Libya’s Foreign Ministry in Tripoli, according to Libyan media.

Three militants on Tuesday opened fire on the ministry’s employees before blowing themselves up inside, the Libyan Jamahiriya Broadcasting Corporation cited officials of the foreign and interior ministries. Two employees and a guard were killed according to reports.

Officials added that one of the suicide attackers was killed by security forces.

At least seven others were wounded, officials told the Associated Press on condition of anonymity.

Photos of heavy smoke rising from the foreign ministry were rapidly circulated on social media showing the bombing.

No one immediately claimed responsibility for the attack, but the North African country has been a haven for foreign fighters, mainly belonging to the IS militants who seized a foothold in Sirte, the birthplace of Muammar Gaddafi before it was recaptured in 2016.

Since the fall of Gaddafi in 2011, Libya has remained in chaos and is divided between three governments and two rival parliaments.

The oil-rich country has been suffering from a financial crisis due to clashes between militias and forces loyal to these governments.

Late in 2015, the UN reached an agreement to form a new “unity” government headed by Prime Minister Fayez Sarraj, based in Tripoli, while the other two remain in the eastern cities of Bayda and Benghazi.