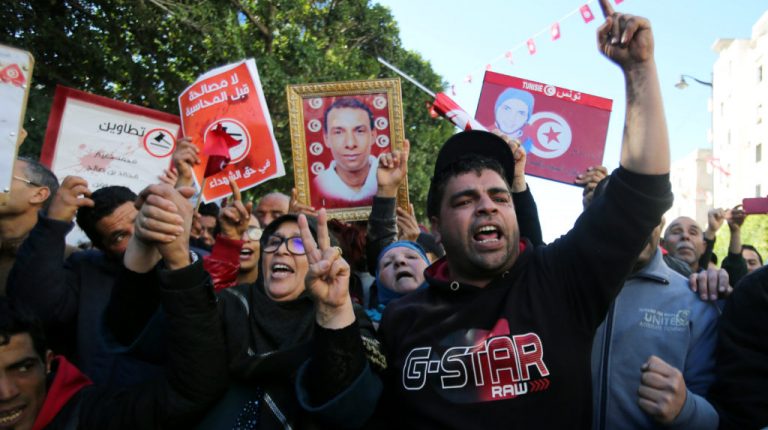 Heavy clashes between protesters and police erupted on Tuesday in Tunisia, after a journalist named Abdel Razaq Zorgi set himself on fire, protesting over the poor living conditions, according to AFP.

As the 8th anniversary of the Arab spring approaches, Zorgi posted an online video before setting himself on fire in Kasserine, in which he criticised unemployment, poverty, and corruption.

“For the sons of Kasserine who have no means of subsistence, today I start a revolution. I am going to set myself on fire,” Zorgi said in the video.

He died on Monday after he was transferred to the hospital.

After Zorgi’s funeral on Tuesday, renewed clashes erupted in an impoverished city which is about 270km away from the capital Tunis, according to local sources, adding that the authorities also deployed reinforcements on the main streets of Kasserine.

Tunisian local media relayed a statement by the National Union of Tunisian Journalists stating that Zorgi died as he denounced the “difficult social conditions and a lack of hope.”

The union was considering a strike.

The incident was reminiscent of the street vendor called Mohamed Bouazizi, who also set himself on fire eight years ago, to protest against unemployment, corruption, and repression.

Despite Tunisia’s democratic transition, the country is suffering from low economic growth, corruption, poor living conditions, and al-Qaeda and the Islamic State’s presence.