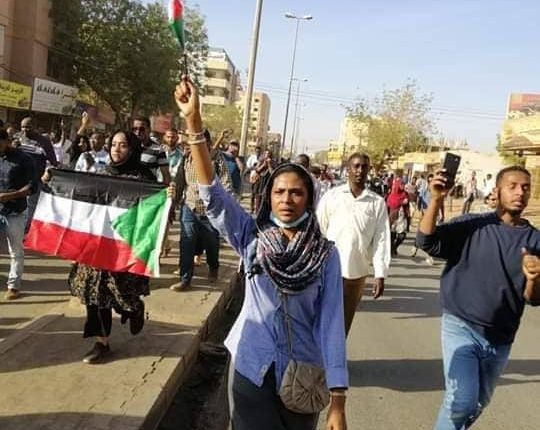 Violent clashes erupted between the Sudanese security forces and the demonstrators on Tuesday in the capital Khartoum, as thousands of protesters were attempting to march on presidential palace.

Activists from the largest Sudanese opposition parties, members of unions, doctors, lawyers, teachers, as well as students continued their protests for the seventh day. Initially, the protest began as a rejection of the price hikes in bread, as well as fuel shortages, but these objections later evolved into a wider call for President Omar Al-Bashir to step down.

The security forces dispersed the march by firing tear gas and shooting gunfire into the air, while eyewitnesses reported to international media that the clashes resulted in some casualties.

Some online videos circulated on social media showed hundreds of people gathering on side roads heading towards the palace, while singing patriotic songs and chanting, “Peaceful, peaceful against the thieves” and “The people want to bring down the regime.”

President Al-Bashir has long been a member of Sudan’s military establishment, which has dominated the country during the last six decades since the country’s independence in 1956. He came to power after he joined forces with Islamists in an1989 military coup which toppled a freely-elected, but a largely ineffective government.

The economic conditions in Sudan have been deteriorating in the recent months, particularly after the currency devaluation which happened earlier, causing the prices to surge.