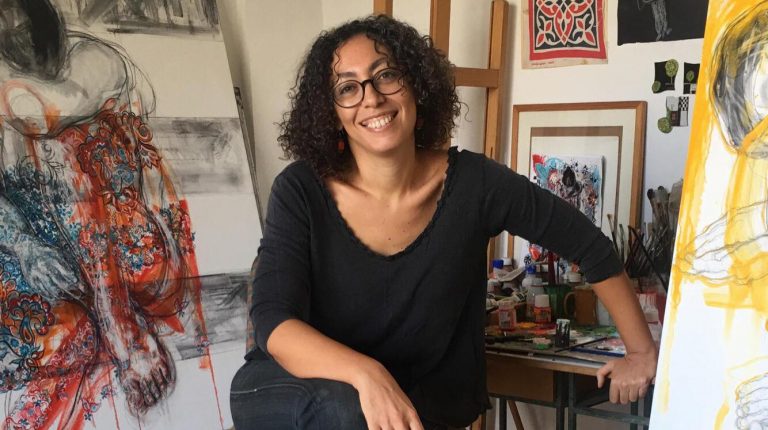 At the Zamalek Art Gallery, Mai Refky, with her short curly hair and bright eyes, sat quietly while closely watching her visitors who came to attend her latest exhibition, ‘Retraced’, which was held last October.

Refky, who was born in 1976, is a Cairo-based independent artist, whose passion for Islamic arts and architecture is clearly reflected in her paintings. She graduated from the Faculty of Fine Arts, the Painting Department, in Cairo in 1998. Later in 1999, she studied Islamic Art and Architecture at the American University in Cairo.

“I am very interested in drawing patterns and using bright colours,” Refky said, adding, “This is what led me to study Islamic Art. It is our heritage, therefore I decided to learn more about it through reading, painting, and finding more about the artists who share my passion, such as French painter Henri Matisse.” 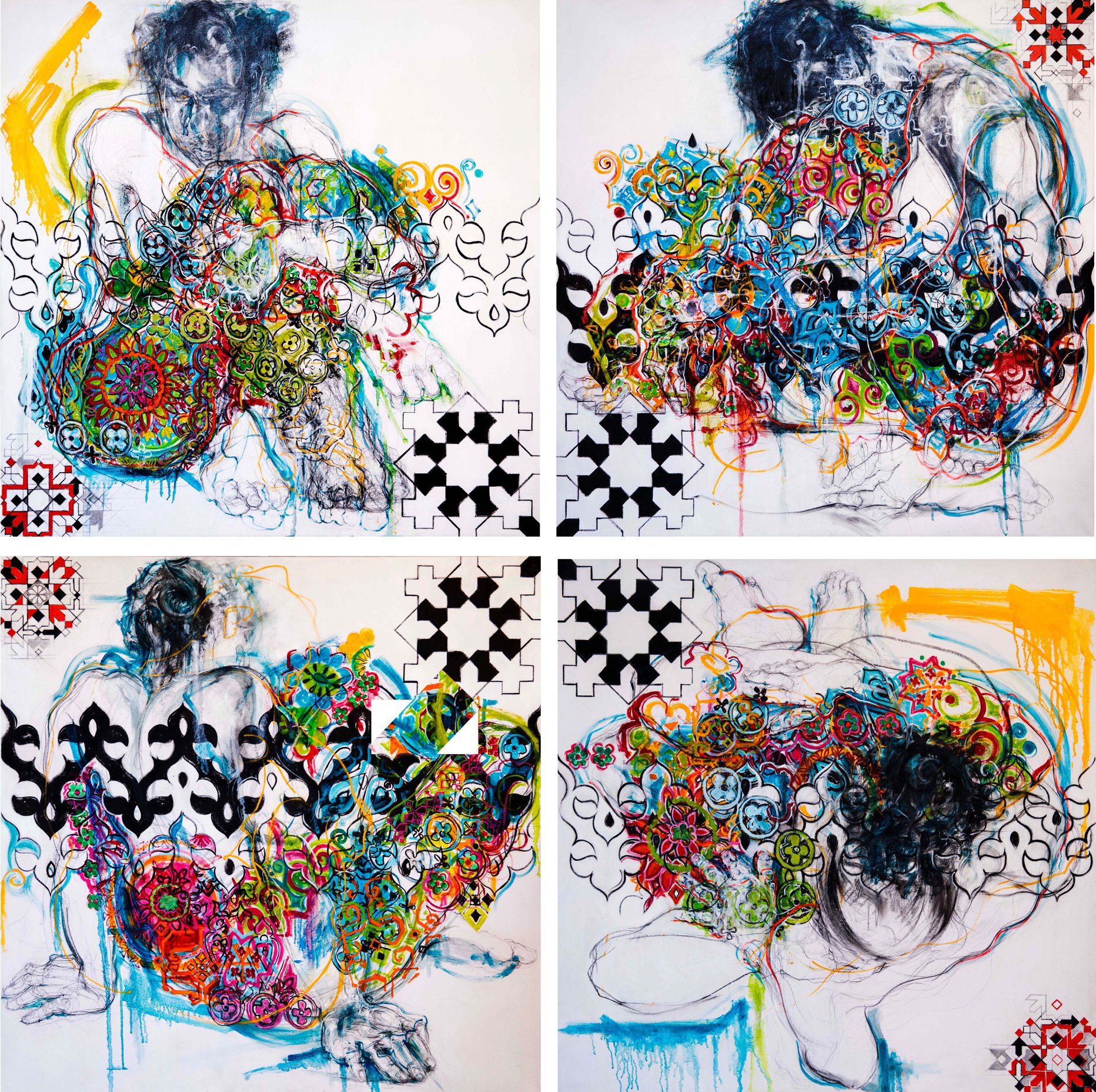 In her twenties, Refky received considerable support from her parents who are both engineers. They appreciate what she does, Refky noted, adding that there were moments of doubts and confusion, as she was once interested in studying science or physics, but she soon returned to arts.

At the beginning, she was interested in drawing figures and people. However, Refky said that she chose to draw faces of people she knew well, or people who are close to her. “Expressions and faces were strongly presented in my earlier works. However, I am more into patterns and their movements now,” Refky highlighted.

In 2006, after Refky gave birth to her only child, Ali, she started working on a collection entitled ‘Woman and Child.’ “I was completely overwhelmed by the feelings of motherhood. I remembered all the mothers I knew in my family. Being a mother is something you see as normal, until you get to experience it,” the artist said.

Ali, who just turned 14, attends his mother’s exhibitions. Fekry said with a smile, “It is usual for him to see me painting, and in many cases, I ask for his opinion, sometimes it is positive and helpful, at other times it is not.”

After a while, the artist moved towards blurring face features in her works. She launched a collection called ‘Portraits of Thought.’ “It was the real start of focusing on the strength of colours and patterns,” Refky noted.

Furthermore, she asserted that continuing in the art field requires effort, work, as well as self-discipline. “Because if you stop painting, your career might be put on hold,” she pointed out.

Refky said that in order to revive her imagination, she always aims to study something new, related to her passion for art. In 2015, she obtained a two year-diploma in learning traditional arts at the Jameel House of Traditional Arts in Cairo. “Learning something new refreshes our abilities and talents,” she declared.

Moreover, the artist admitted that she is slow-paced to an extent, and is not very productive, in terms of quantity. “I prefer to focus more on the process of painting, and to give each collection its time without thinking of the quantity or the numbers produced,” Refky pointed out. 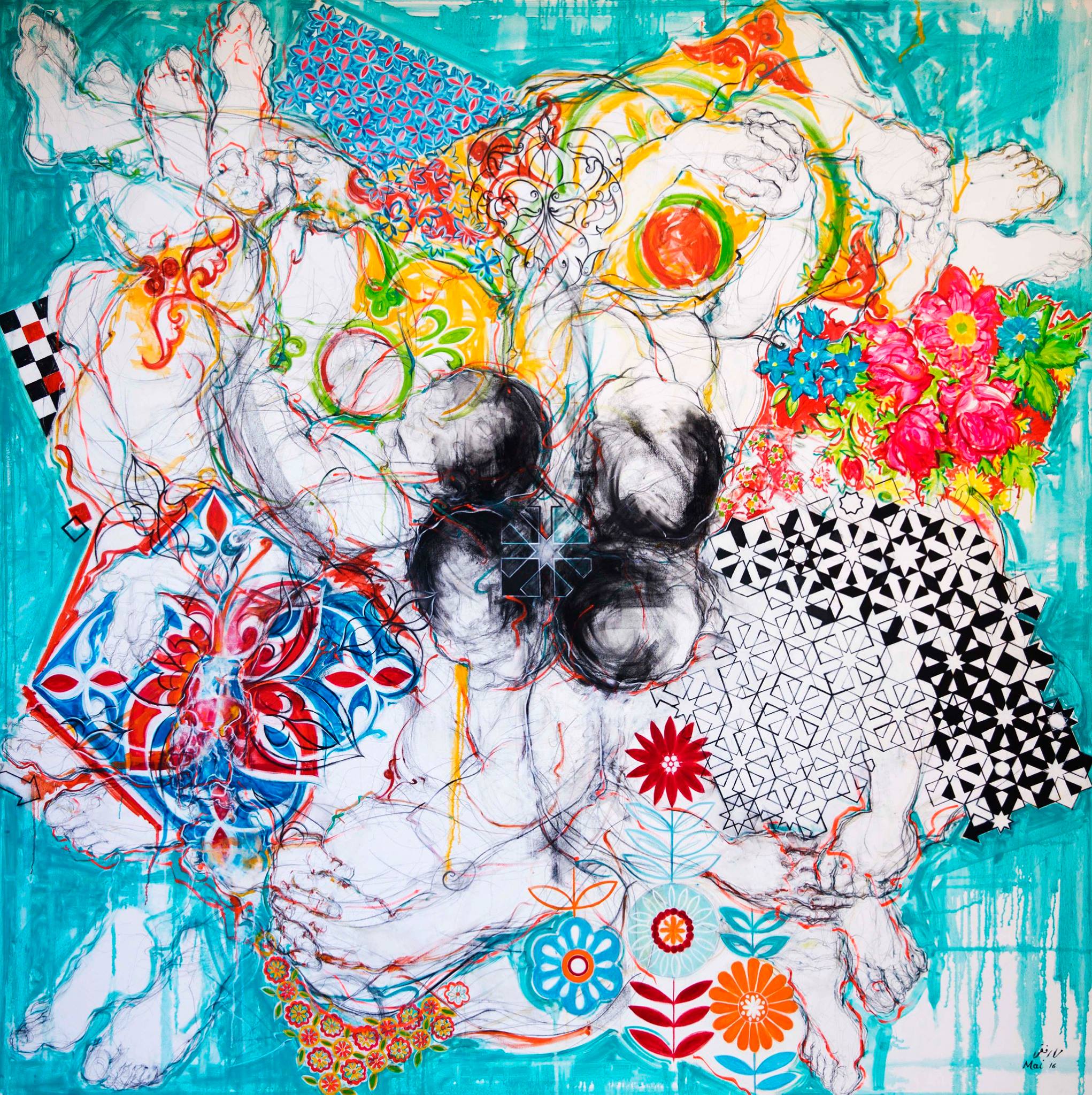 In her latest collection ‘Retraced,’ Refky presents what she described as her own exploration of the human body. “The main concept are the patterns and their relation to human beings. It is mainly about how movement echoes patterns and reflecting the human body and its movements, as well as one’s presence. It a visual project more than a descriptive one.”

Refky highlighted that she prefers to allow her audience to suggest meanings and metaphors hidden in her paintings. “There is no story in this collection, just presenting patterns’ movements and colours, as well as the repetition which gives them infinite possibilities.”

There are almost no faces or explicit features in this collection, Refky added, “I did not want to outline characters or stories, I do not want people to ask for a narration. Instead, I encouraged them to focus on patterns and colours, as well as to make up their own stories and narrations.”

She acknowledged that she sometimes faces times of uncertainty and isolation, but once she feels that, she decides to learn something new, which is related to her field. With a new adventure or experience, she is able to overcome those feelings.

“Do not wait for achievements, this what I have learnt. You may be disappointed if you exceedingly anticipate things. Focus on the content, on what you do. Believe in yourself and do your best, then you will be satisfied,” Refky concluded.