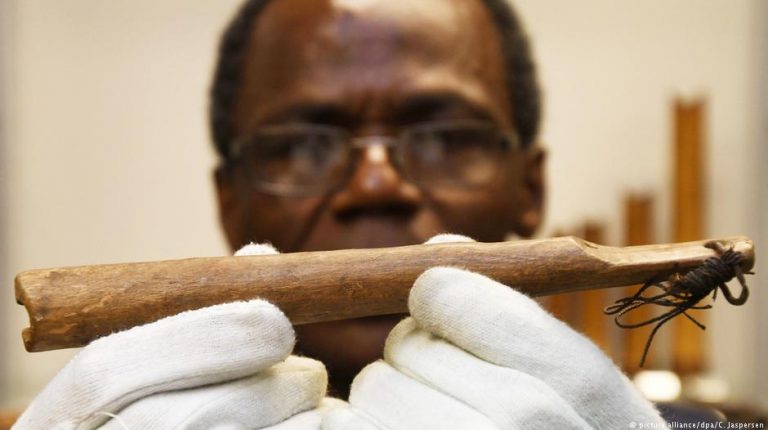 France plans to return colonial-era objects to Africa. Other former colonial nations also pondering how to deal with colonial collections. Restitution should not be the focus, a German museum director warns.DW: Do you have a guilty conscience when you think about African culture?

Wiebke Ahrndt: Sure. But it is more of a feeling of responsibility. A large part of the collections in our museum dates from Europe's colonial era. That wasn't a glorious chapter in European and German history. We bear responsibility.

Clearly not all museums in Africa have extensive collections like we do, and some have none at all — for various reasons. Many African cultural objects were taken to western museums, in various ways.

Many objects in your museum's Africa section come from the former German colony of Cameroon. Were they all purchased legally?

That is something we are currently researching in cooperation with the VW Foundation. Several postgraduates are going through our collections. The postgrad responsible for our Cameroon collection, a Cameroonian himself, is touring Cameroon at the moment to speak with people in the areas the artifacts stem from, including members of the respective dynasties there, to find out how exactly the objects got to Bremen. Do we have to exhibit some of the pieces differently than before, or perhaps even return them?

So you can't really answer my question with a 'Yes'?

It needs research. Concerning one of our collections, we know the collector was a member of the military. It seems likely the artifacts were taken in the framework of a punitive expedition. Those are the issues we are currently looking at.

Can you even determine whether objects were purchased legally so long ago?

That is in fact quite difficult. The origins are often hard to trace, often we have no more than a name. Then, we need to research the object, to find out what it is, what part of the country it comes from and what its significance was. For that purpose, you can seek out local people to find out whether the object would have been given away willingly at all, or never would have been parted with voluntarily.

Speaking about legally and illegally, which legal system applied in the colonies?

German colonial law applied in the German colonies. But the question of legality usually doesn't lead very far. Of course there are instances where you can say that a theft was a theft even back then. And then, of course it is not legal. But there are areas where this question isn't helpful, and all you have left are moral and ethical aspects to decide how to handle the matter.

Colonial law was the law of the strongest, it favored the colonial rulers, is that why a focus on legality isn't helpful?

Perhaps that is the case, but of course there the countries of origin had an understanding of what was and what wasn't legal, too. That is something to bear in mind when examining ethnological collections.

If a Cameroonian were to turn to a German court to demand the return of a sacred cultural artifact, what would his chances for success be?

That would depend on the case. We say that no museum should ever play the statute of limitations card, arguing that, sorry, 30 years have gone by, that's done and dusted. From a purely legal point of view, everything that happened back then falls under the statute of limitations. In court, a claimant would have to give reasons why he is in a position to demand the return. But in truth, none of these debates go to court.

Would it be difficult for the Cameroonian because he bears the burden of proof?

Yes and no. Museums have their own document archives. It would be unethical for public institutions to bar people from accessing the files. The provenance research of the kind we are doing at our museum is totally open: I don't tell anyone to keep anything under wraps. Of course, we search for every source available, no matter what it says. Apart from that, there are colonial archives and state archives that are open to all. Our provenance researchers use those a lot.

It seems international law isn't very helpful for the former colonies, either. Does that mean museums in Germany and elsewhere needn't worry about their collections?

Irrespective of the legal issues, we don't have to worry about our collections for the most part. Various artifacts have already been returned, and that will continue. The issues the French have raised — giving everything back to the countries of origin — have nothing to do with reality nor, as a rule, the interests of these countries. What we are talking about are special objects, culturally sensitive objects including human remains, leadership insignia and special religious artifacts. Those are the things that we must talk about.

Is the German government willing to return artifacts, for moral reasons or out of a sense of obligation?

A lot has changed, and Germany's colonial past has been a public issue for several years. The matter was even included in the government's coalition treaty. Things are happening. Turning it into a matter of mere restitution would be taking a too narrow point-of-view. There is a willingness to return objects we realize should no longer be in our collections for legal or ethical reasons — unless the countries of origin want them to stay. But I don't believe returning artifacts diminishes guilt. How does that make things better?

Wiebke Ahrndt, born 1963, is an ethnologist and university professor. She has been director of the Überseemuseum (literally, the overseas museum) in Bremen since 2002. She headed a group of experts writing a guideline for German museums on how to handle the colonial legacy.