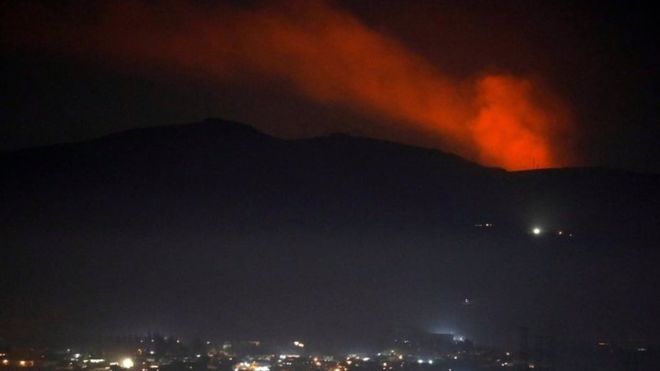 Israeli airstrikes struck an Iranian and Hezbollah weapons depot in Syria’s capital Damascus on Tuesday night, injuring three soldiers, according to the Syrian state media and a US media report.

Syrian air forces said that most of the Israeli missiles were intercepted.

Several senior Hezbollah officials were injured in the airstrikes according to a report of the American weekly Newsweek, citing a source from the United States Department of Defence.

The magazine said that it received its information from “a Department of Defence source who has access to the information from Israeli senior military officers with direct knowledge of the attack.”

Israeli forces did not immediately comment on the attack, but then it tweeted that “an IDF aerial defence system activated in response to an anti-aircraft missile launched from Syria.”

The Britain-based Syrian Observatory for Human Rights said in a statement that the Israeli airstrikes targeted Hezbollah or Iranian forces arms deports.

“Missiles fired from Israeli planes targeted … arms depots southwest and south of Damascus that belong to Hezbollah or Iranian forces,” the head of the Syrian Observatory Abdel Rahman said.