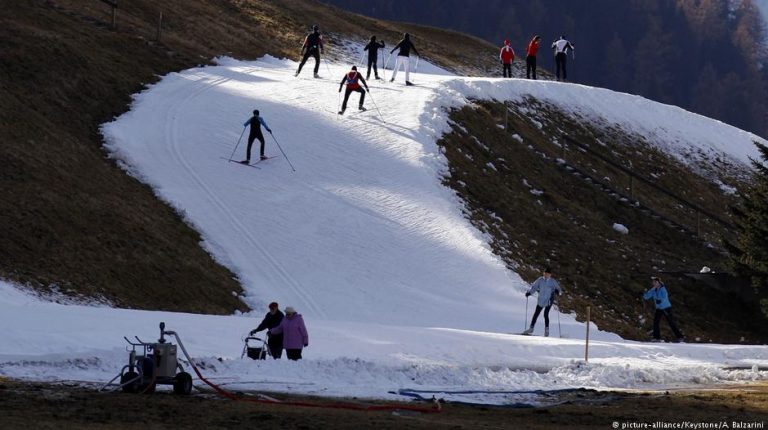 Davos bills itself as a “cross-country-skiing paradise” – due to the fact that getting enough snow in the winter has always been as good as guaranteed. But now climate change is starting to have an impact."The route into the Sertig Valley is my favorite trail, simply a classic," says cross-country skiing star Dario Cologna. "This beautiful valley has so much sun and there is always a bit of an incline so it is perfectly suited for longer endurance training."

Cologna lives and trains in Davos, where he laid the foundation for his successful career, which has included four Olympic gold medals for Switzerland as well as four overall World Cup titles.

In Davos, Cologna also appreciates the World Cup course on which the elite of cross-country skiing compete for points every December.

"I have competed in many relentless races here in the Flüela Pass," the 32-year-old says.

He is just one of the elite cross-country skiers who profits from what is known as "snow farming," which allows them to train in optimal conditions on snow beginning in the autumn.

At 1,560 meters (5,118 feet) above sea level, Davos is the highest-situated city in Europe, and until recently, getting enough snowfall in the winter has been as good as guaranteed. However, even in the canton of Graubünden, where Davos is located, climate change is beginning to take its toll, with temperatures rising and winters getting shorter.

Christian Flury, head of the National Cross-Country Skiing Center, says that in recent years, there simply hasn't been as much natural snow as there had been in the past.

In 2008, the local authorities introduced the use of snow farming – the practice of preserving snow from any given winter for the following cross-country skiing season.

"This is a huge advantage for us because is gives us planning certainty. As early as the end of October, we can prepare a challenging four-kilometer (2.5 miles) cross-country trail of man-made snow in the Flüelatal," Flury says.

This is why a number of national teams, including the German women's biathlon team, train there.

"Long trips to the north aren't necessary; the athletes can train in daylight, instead of training indoors. This makes ecological sense," Flury stresses.

During the winter, around 20,000 cubic meters of mainly artificial snow is produced and stored in the Flüela Pass and covered with a 40-centimeter-thick layer of sawdust. The snow is produced while temperatures are below the freezing point, so that less water and energy is needed than in milder conditions in the autumn.

"We currently have a about a 20 percent loss through melting in the summer, but gathering natural snow would be much more complex and would require a lot of machine hours," Norbert Gruber, head of technical operations for the municipality of Davos, explains.

This process was developed by the Swiss Institute for Snow and Avalanche Research.

Simulating Pyeongchang on the treadmill

However, it may not only have been snow farming that helped Cologna win Olympic gold in the 15-kilometer freestyle in South Korea earlier this year, but possibly also a three-meter wide, high-tech treadmill in the Davos cross-country center, which the athletes can train in using roller skis.

"We can simulate speeds of up to 50 kilometers per hour and 25-percent inclines regardless of the weather, but most importantly we can simulate routes such as the Olympic course in Pyeongchang," Flury explains. "We are expecting this to be of real benefit for the next generation of athletes. With this, we can help them conduct even more specialized training for what we hope will be future Olympic victories.

Open to the public

In addition to the cross-country skiing elite, amateur skiers also take advantage of the Davos Klosters ski area. The free-of-charge network includes 100 kilometers of classical cross-country trails and 75 kilometers of skate-skiing trails of all levels of difficulty, something that Christian Flury describes as a "unique mixture."

"Davos is a small town. You can walk from any hotel to the trails, but you also have the side valleys. There, you can get away from everyday life and find peace in nature. You may even run into Dario Cologna."