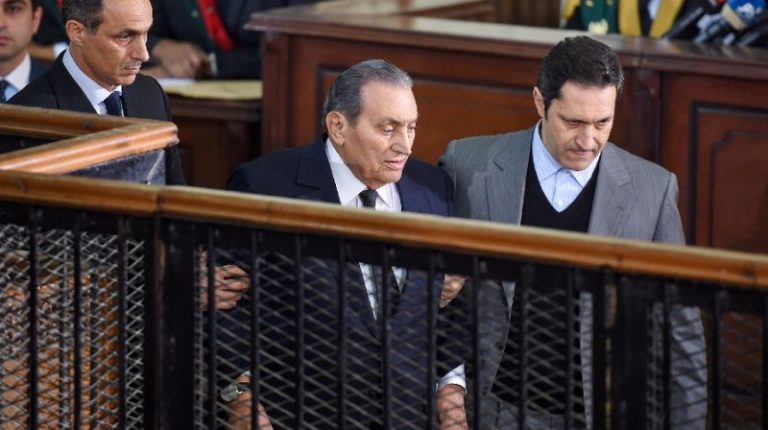 Mubarak claimed that Hamas sent 800 members to Cairo during the 2011 revolution, therefore allowing prisoners from Hamas, Hezbollah, and other criminals to escape from Egyptian jails.

Mubarak said that “they entered Egyptian land through Gaza and had weapons. They headed towards the jails to release prisoners belonging to Hezbollah, Hamas, and the Muslim Brotherhood.”

“While Hamas deplores some parties’ insistence to embroil the Palestinian movement into Egypt’s internal affairs, it reiterates its commitment to its policy of non-intervention into the internal affairs of other countries, including Egypt,” the movement said in a statement on Saturday.

Last week was Mubarak’s first appearance since he was acquitted from charges of ordering to shoot the protesters.

The former president added that the perpetrators broke into the Wadi Al-Natrun prison, which contained a number of “Brotherhood and Hamas members.” He also said that by default, Hamas’ members are all members of the Brotherhood.

He added that once the perpetrators got into Sinai, they “killed police officers and stormed into security buildings.” However, he added that he has further information but would “need permission from the presidency to reveal more.”

Relations between Egypt and Hamas have been suffering since the ouster of former Egyptian President Mohammed Morsi, and the Egyptian media accused Hamas of supporting the Brotherhood, and launching terror operations in Egypt.

However, after 2015, relations have improved. In 2017, Hamas and Fatah signed an agreement at the Egyptian General Intelligence Directorate’s headquarters in Cairo, and the two factions agreed to proceed with further meetings to plan for presidential and legislative elections.