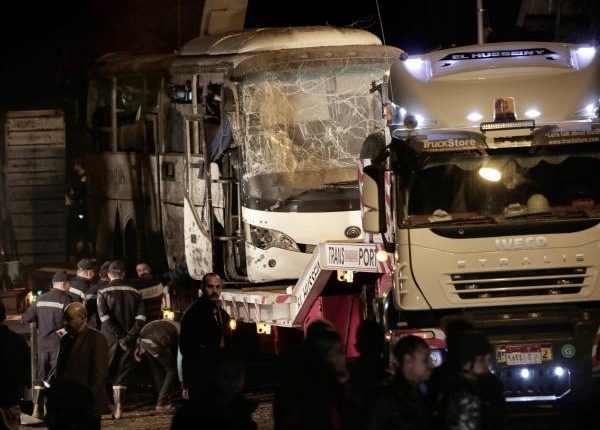 A Friday bus explosion in Giza killed four including three Vietnamese tourists and an Egyptian tour guide while about a dozen others were injured. A roadside bomb exploded as the bus was passing through a street near Egypt’s pyramids area.

Editor-in-chief of the private Al-Shorouk newspaper Emad El-Din Hussein highlighted the timing of the attack, which he says happened a few days before New Year’s Eve, aiming to harm the occasion and tourism in the upcoming months. Hussein argued that although the attack was a surprise, he had personally expected acts of terror every now and then. Hussein concluded that terrorists are executing a foreign agenda which not only causes damages to the Egyptian government but to people as well, who will pay the price.

In state-owned daily Al-Akhbar, Karam Gabr discussed “fast retaliation” by local security forces in operations against terrorists, although he did not directly link it to the recent incident, after which the ministry of interior announced the killing of 40 terrorist elements in Giza and North Sinai, also unofficially linked to the attack. Gabr praised “brute force” on the grounds that it is the only language understood by terrorists and that the Egyptian people have unlimited confidence in police forces. “Before Saturday dawn came, the police was retaliating for the innocents and responding to their reckless assault by brute force.”

Wael Al-Semary, from the private Al-Youm Al-Sabea, wrote that his newspaper launched a campaign asking people to send pictures of themselves in touristic areas to promote tourism. Hundreds of lovely photos were received, showing resistance, he added, re-publishing part of an older article he wrote about the image of Egypt away from stereotypes, but rather a land of civilisation and culture.

For the newspaper’s Mohamed El-Dessouki Roshdy, he focused on criticising those who blame the state, the aftermath of terrorist attacks, or accuse the government of negligence. He praised security efforts arguing that there have been positive results in reducing terrorism, such as in Sinai, but attacked those that claimed that intellectual war on extremism is failing or insufficient.

In the private Al-Watan newspaper, Dina Abdel Fattah considered the attack proof that terrorism failed in facing the state, whether security apparatuses in Sinai or civil institutions working on development and spreading awareness, tolerance and peace. She argued that amid a global war on terrorism, this extremist ideology will continue to be weakened.