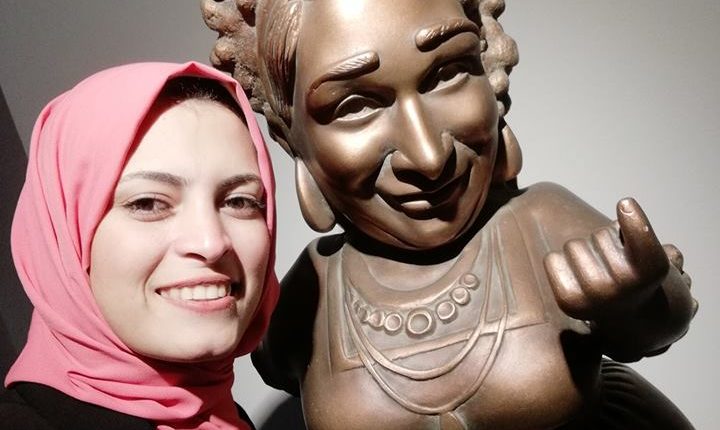 Mai Abdullah is a young artist who always had passion towards Egypt’s iconic stars never which she never defied to bring to light until it found its way to the public through some of her most unique sculptures being displayed at her first solo exhibition called ‘Teatro.’ 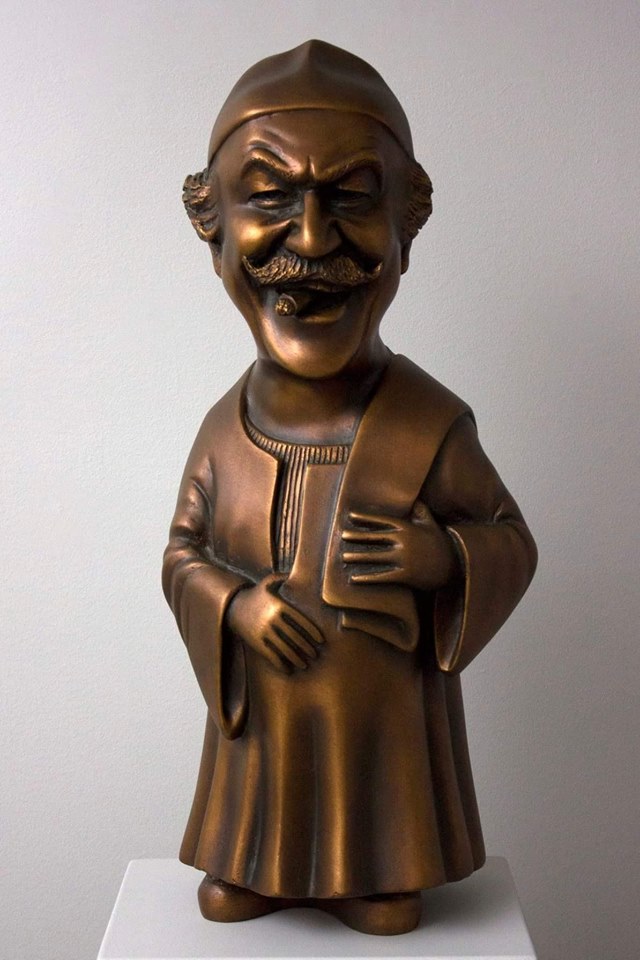 Taking place at Zamalek’s Gallery Misr, the exhibition showcases 22 statues of Egypt’s most beloved superstars, each posing in his most familiar of standing. A few steps betweent Omar Al-Sherif, Um Kolthoum and Abdel Halim Hafez are sufficient revive the spirits back to life in the middle of the audience, who all agreed that the statues rejuvenated them. The exhibition’s opening witnessed the attendance of the Minister of Social Solidarity Ghada Wali who expressed her support and enthusiasm towards Abdullah’s work.

The display follow the journey of Abdullah’s graduation project, which was wood sculptures of eight famous stars.

“I felt that there were practically stars inside of me that I want to bring to light and sculpt. Despite the risks of repeating myself and presenting the same exhibit which all artists are aware of, I believed that I could go forth on without using mud to shape these figures and allow the world to see them the way I do,” Abdullah told Daily News Egypt.

The 22 sculptures are fashioned from polyester resin, which is a material that is stronger than typical mud, and it assists in sharply presenting the features, according to Abdullah.

From her point of view, she chose to display the character based on the connection Egyptians have with them.

“I decided that I want to sculpt the artists which Egyptians love the most. Charisma was on the top of my list. Stars who are charismatic enough to have forged a strong love relationship with their audiences naturally found their way to my head when I was choosing,” Abdullah mentioned.

The sculptures vary from deceased stars to others who are still alive. However, they are all considered the closest to Egyptians’ hearts.

“I wanted people to smile once their eyes rested on the statues, and that would not have happened unless they blindly loved the displayed characters,” she added. 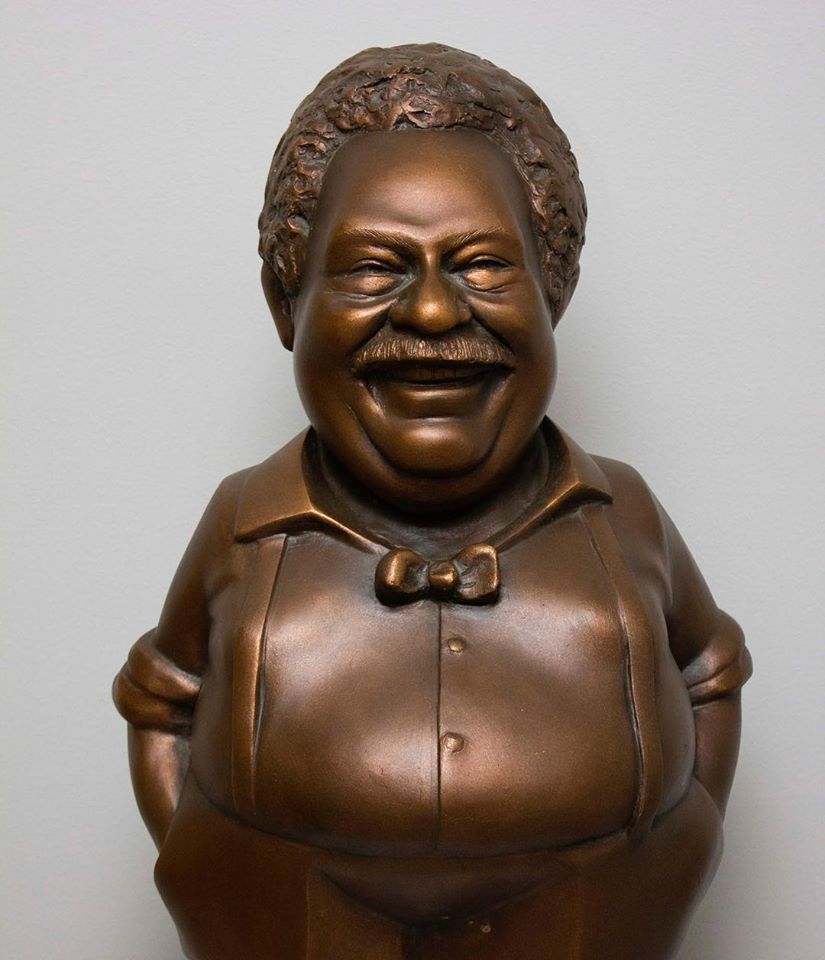 Some of the statues showed megastars in their most famous roles, such as Mary Monuib who was known for her roles as a spinster looking to seduce any man into marrying her in a comic way. The sculpture presented Mounib with her well-known look and smile, which she is known for having while trying to set a man up into marrying her.

For over a year and a half, Abdullah spent her whole time—to the extent of sacrificing her job as a teacher’s assistant at Minya University, and all other social activities— in order to dig deeper into the details of each character so as to present them as they currently are, unmistakable and unequivocally close to real version of themselves.

“I made a list of the artists I wanted to shape. Before starting each piece, I studied the character in-depth in order to decide what side of this star I will be highlighting. I found some of them were quite easy to be featured as caricature statues while others were the comple opposite,” she confessed.

As she kept going, she explained that artists who are known to people as comedians were the easiest to work on like Mary Mounib and Alaa’ Wally El-Din, “whom one could not help but smile when seeing their pictures, so featuring them as caricatures was not difficult.”

On the other hand, Characters like Adel Adham, known for portraying nothing but evil roles and questionable characters, was one of the hardest characters to shape.

“People know him as the wicked and evil man, so thinking of a way to bring him to them in a funny, light way through which he can be seen in another perspective was the hardest part of the whole process,” Abdullah explained. 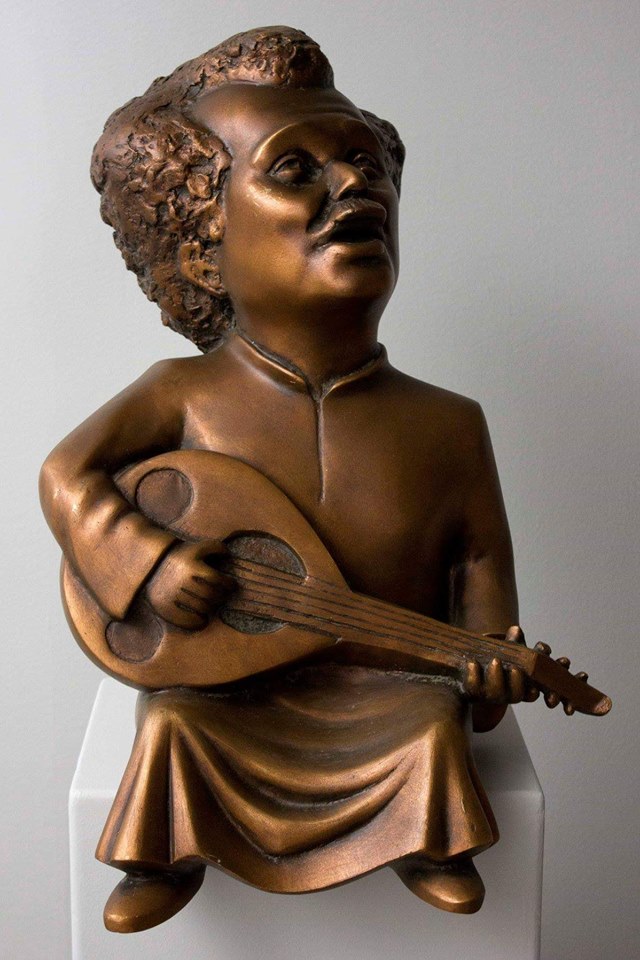 As the majority of art producers, Abdullah developed a connection with each sculpture she spent time creating, despite the change to time spent on each of them.

“Some of them were so easy when it came to apply the vision I have in my mind on mud, that they took only two days, such as the sculpture of Fairoz. On the other hand, others were much harder to bring the soul of the character to life through mud, extending the work period up to a month sometimes, such as Adel Adham,” she asserted.

Based in Minya, Abdullah faced many challenges to make her exhibition take place.

“Despite the large artistic scene in Minya, it is not as big or as major as Cairo. So, I brought the exhibition to Cairo. The centre made more sense as it is the only way to attract more people from all the governorates, which would not have occured if I made in in Minya,” Abdullah explained.

During the past months, with the help of Gallery Misr, Abdullah has been transporting the statues in shipments from Minya to Cairo in order to safely bring them over.

Nonetheless, all the struggles and challenges are all currently forgotten with the huge success the exhibition witnessed. Teatro was met by a substantial gesture of support, penchant and affection by both critics and the public.

Social media showered Abdullah with favouritism by people praising her ability of reviving their most favourite characters in a delightful exhibition which runs until 14 January.